A Sunday Walk With Friends In April

I just realised that I never did make the post about our 32K walk around Putrajaya with two running friends. We did it on Apr 12th, 2015 and somehow at that moment (due to mourning and lack of enthusiasm to share anything much with others), I just skipped the weekend's activities which is a pity now that I looked back.

It was a few weeks after the passing of my father-in-law and actually I was feeling a bit down after "kena perli" online by someone who said that I was looking for excuses to not start the 100K Sabah Adventure Challenge. It was a low blow for me and it did cause me to wonder how much passion does one need to run if death of a loved one is not an acceptable excuse to forgo a race.

Anyways, to cheer ourselves up, we decided to go for a long walk (nah. didn't want to run that time) and spent some quality time together and we were joined by two other runners. 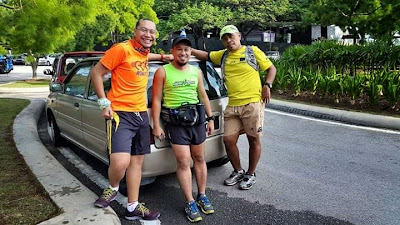 With two friends before the start of the run. One only did halfway and we accompanied another till he finished. 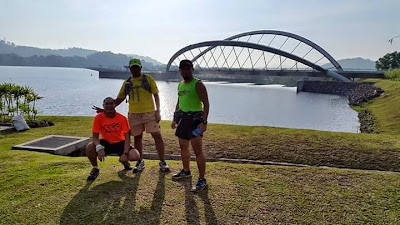 We started from Taman Seri Empangan in Presint 5 Putrajaya at around 8:00am, made our way to Putrajaya Challenge Park, head towards the cemetery in Presint 20 before reaching the long stretch of Persiaran Timur (I think) expressway.

Along the route, we bumped into Lini who hollered hi at us. An Ironman, tri-athlete and a champion at that and she still is nice enough to say hi whenever she sees us. 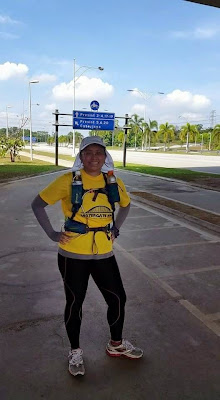 Sure was glad to find some shade under the flyover.

This is always a stop rest/blister management/refuel post whenever we use this route. We waited for the other two to arrive as Zaini and I had changed our walk to a run earlier. 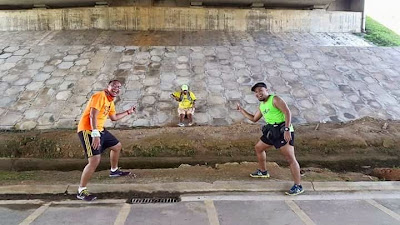 And goof off a bit when the gang were all complete. Hahaha 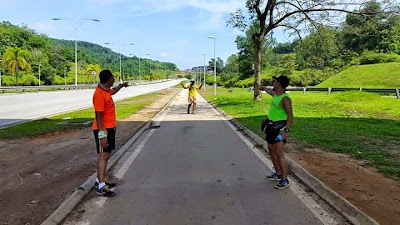 And then, after a few minutes rest, take selfies, update Facebook, etc. it's time to start again under the blistering 10:00am sun.

I don't know why but tackling the inclines at Taman Rimba Alam after this section felt so hard for me. I've never stopped during a climb before and yet, I had to this time at one stretch because my heart was beating way too fast for my liking. I rested a few minutes while hubby waited for me a few metres away, on the flatter section.

By this time, the party of four whittled to three.

It was a joy to finally arrive at the rest area in Taman Rimba Alam. A cool shade and toilet. We decided to stop, take a breather and splash our faces with cold water. 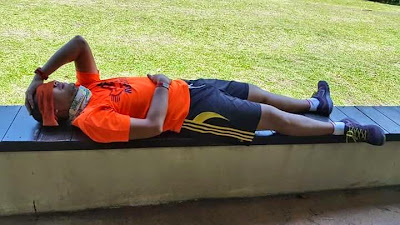 And play drama a bit. LOL

It was around lunch time when we got here so we decided to head to Presint 15 and stop for lunch at Restoran Darussalam. 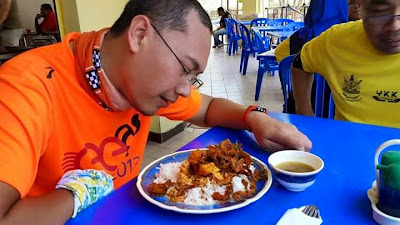 At this point, we decided to continue our walk by heading to Alamanda before continuing our walk back to Taman Seri Empangan via the lakeside and then through PoJ.

Some stairs tackled later, nearby the Pink Mosque and we were almost finished.

The last 2K were spent completely drenched as it rained rather heavily. It was a godsent actually, after spending many hours under the hot hot sun. But the thunder and lightning made it unsafe for us to dilly-dally so we continued as fast as we could and it was a relief to finally arrived to Taman Seri Empangan. 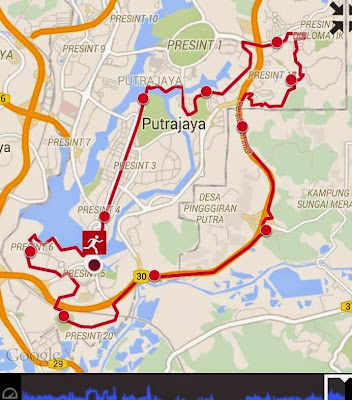 And Zack was happy with the distance he managed to do, although if it wasn't for the thunder & lightning that accompanied the rain, we would've conned him into doing 50K! LOL

Zaini and I later managed to get our 50K LSD a week before Route 68 Challenge but we did it at night time instead.
Email Post
Labels: Close to my heart Itchy Feet Out and About