If It Fits, Why Not?

Even if it'll seem that we're bucking to a trend. A brand. A style.

Whatever it is that we want to do or try, even if it feels so mainstream (gasp! horror!); if it's not detrimental to our health and not inconveniencing anyone, why the HELL NOT?

Everyone seems to be into running nowadays, with race slots being snapped up quickly, and I'm not only referring to SCKLM 2015 record breaking registration being completely sold out in 5 days! Funnily enough, not everyone is embracing this sudden "craze". Not non-runners. But those who had been doing it for many years. Because new runners caught the craze, it seems. Instead of just being passionate about running.

But if everyone wants to run, why not? It's not a bad thing, right?

Anyways, I actually wanted to write about another passion of mine, other than running, and that's running shoes. Hahaha 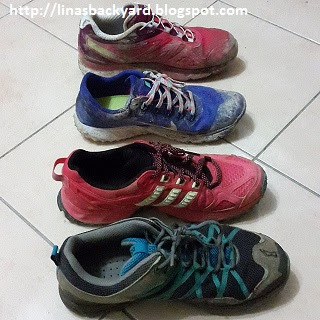 Apart from road running shoes, I now own 4 pairs of trail shoes. OK, two of them are actually multi-terrain which mean they can be used on both road and trails.

I first own the Inov-8 (that blue shoes at the bottom of the photo). When I got it, not a lot of people know what that UK born brand is. And that was the pull for me.

Thankfully, unlike many road shoes I tried and didn't like, my Inov-8 Roclite fits me well.

Then, I needed an extra pair as my training at the trails increased to twice a week, usually Saturday and Sunday and sometimes even twice a day.

My friends recommended Salomon shoes but I wasn't too keen on the brand as it seems everyone running trail owns one and being a penny-pincher, I decided to try a cheap(er) trail shoes from Adidas. Adidas Kanadia that retailed at a mere RM160.00 when I got it. Bargain!

I got my Nike Zoom Terra Kiger simply because hubby was buying one and at RM270 a pair, it was a bargain for a Nike shoes. A joy to run in too but not exactly what people around me seems to prefer for trails.

And finally, I had the opportunity to put on a pair of Salomon shoes. An X-Scream 3D. Despite my early reluctance on owning a Salomon shoes, the pair fits me well and so far, I love it! Mainstream or not, I am happy to be wearing my pink Salomon shoes now.

My rambling, long-winded point of this post is, don't form an opinion just based on what others say or views.

And this is also applicable in life in general too, right?

Be free to form our own opinion.
And let others have theirs.

Be free to voice our views.
And let others do so too.

Anyway, does this post makes sense at all? I'm confused too. Hahaha
Email Post
Labels: Close to my heart Rants and Ramblings