The name of last Sunday’s Route 68 Challenge was derived from the Federal Road name; Federal Route 68 or Jalan Gombak which is the old federal road before the Kuala Lumpur – Karak Expressway was built in the 1970s. Or like we always call it, Jalan Bentong Lama. 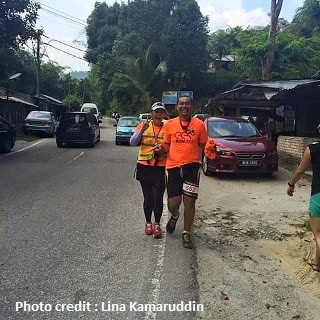 We (Zaini and I) entered this race on the invitation of a friend who was also one of the “Orang Kuat” of Route 68 Challenge. Invitation or poison lah… Kena poison to run this because otherwise, why on earth would I want to run in a route I am very familiar with, as we used it to avoid the Karak jam during peak holiday period back to our hometown.


Hilly route notwithstanding, which I don’t really like, I was very happy with this run. With some half-arsed training that I did prior to the run, I adjusted my initial target of finishing in 8 hours to 8hours 30min. Give myself discount a bit. Clever right? Damn lazy also. Hohoho


We decided to opt for the shuttle bus that was being provided for participants of Route 68 at the cost of RM20.00 per pax(return) to get to the race venue which was located at the Dewan Komuniti Orang Asli at KM24 Jalan Gombak. Got to Dataran Merdeka as it was the bus pick up point for the 5:00am bus and was greeted by Uncle Sonny and his wife. Am so touched that Uncle Sonny still remembers me. ^^


Anyways, got to the Starting Line of Route 68 before the flag-off of the 68K category so we were able to see the flag-off at 6:00am. 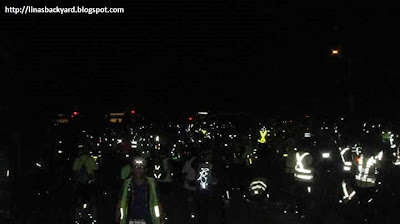 Why headlamp and reflective vests were made mandatory for this race.


A km into the run (well, we planned to just walk the uphill), Zaini asked me what pace to hold. I told him anything below 11min/pace would be good for the first 17K to meet the 3-hour cut-off at the Genting Sempah checkpoint. And that we did. We didn’t run but just walked, maintaining a 9-10min/pace. 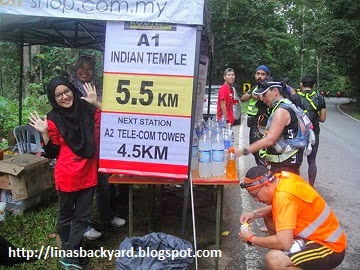 We arrived the first water station at KM5.5 in less than an hour. Still happy happy pace mode. 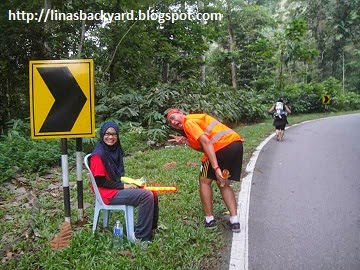 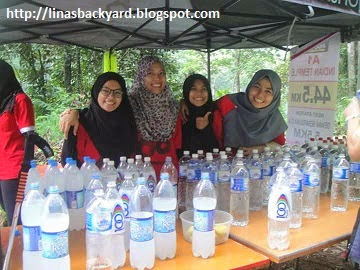 With the awesomely friendly and helpful volunteers. All the volunteers at ALL the water stations (WS) and check-points (CP) were friendly and cheerful! I even got a warm hug at KM16.5 WS. Thanks guys.


From a 10min/km pace (hilly la…later tired, you know), we picked up our walking pace to a 9min+/km pace before we reached the next WS at KM10. 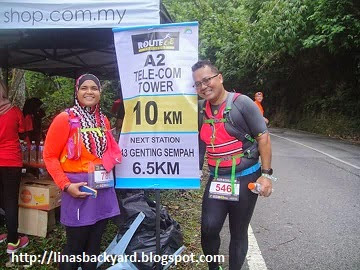 Friends were there so I “forced” them to take photos together. Hahaha


The next WS and CP was located at KM16.5 just before the Genting Sempah R&R. We had, up to KM15 point just maintained our speedwalk, but as there was a nice 1KM downhill section to get to the CP, I told Zaini I was running that section and proceeded ahead. Downhill running is my happy running place. I was maintaining a 5:25min/km pace for the whole 1KM+ section without too much effort. Now, if only can learn to run that pace on flat area, eh? 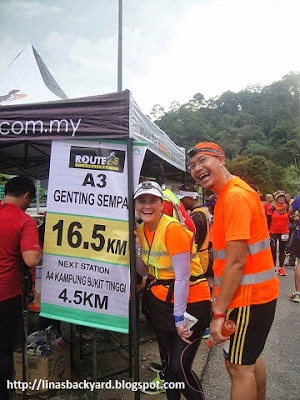 Another friend who was volunteering instead of running was at the CP hugged me when I arrived. I got my Racematix tag scanned (oh, I forgot to mention this earlier. The organiser had use Racematix for timing and updates were real-time so at least, our family member or stalkers can view our progress from home, online). Got myself some drinks and also ate some biscuits and crisps that were served there. Salt is GOOOOD!
Thank you for the hug and care!


The cut-off at this CP was 3 hours and we made it here with 30 minutes to spare. Needed that buffer to compensate for the anticipated slow uphill climb after our u-turn at KM25 point. 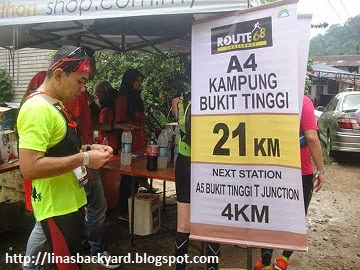 The next WS was at KM21 point. We first continued the now downhill section together but I itched to run so we ran a bit, taking advantage of the downhill. Can’t help to think that it’ll be murder to climb up this section after our u-turn though.


A bit further ahead, Zaini told me to go ahead and to meet up at the u-turn point at KM25 and I did went ahead. As I said, I love running downhill. The problem with me is that I’m no good with flat and uphill section. Hahaha 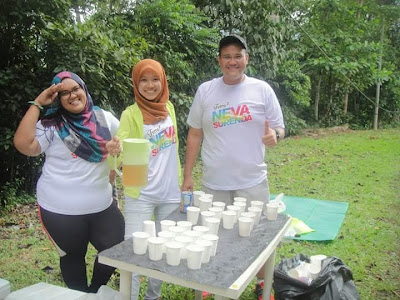 About 2K after the KM21 WS, there was an independent WS set up and they served ice lemon tea to everybody. Thank you Bard and gang! Really appreciate the gesture. 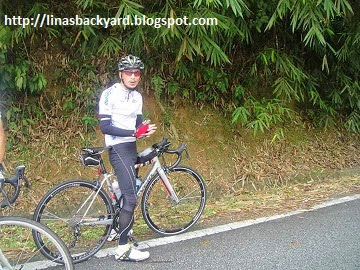 This was where runners of 50K had already made their u-turn so as I ran/jogged/walked towards the u-turn WS, I bumped into runners and most gave encouragements to us. Thank you too! Even received encouragement from a friend who was cycling along the route that day (he did 90K yesterday) and also another friend who was giving encouragement as she was driving past. She was there to support her husband who was also running 50K. 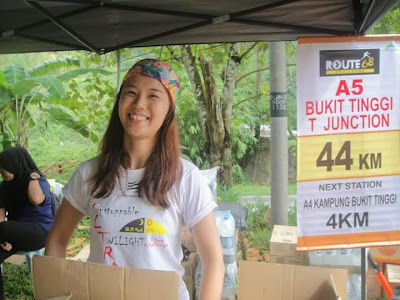 The KM25 WS and checkpoint. Again got my Racematix tag scanned, got photos with leng chais and leng luis manning the WS taken, ate some bananas, drank a lot of coke mixed with 100-Plus and even ate an ice cream potong which was awesomely salty and masam and sweet. Zaini arrived a bit later and we continued for the last 25K together.


Although we got to the WS with 20 minutes to spare from our target and despite Zaini’s word that we’d take it easy for the 8K climb back towards the Genting Sempah WS, his pace left me struggling to keep up with him but I tried to not let our distance apart be more than 100m so at times, I had to run to not be left behind too far.


As we trudged uphill, we chatted with a few runners and one who told me that he accidentally ran all the way up to the 68K u-turn although he had a 50K bib on. Alamak!


Got to KM29 WS and had some watermelons. Bliss. Ate a few before continuing on.


I was getting hungry minutes later and although I had brought my Hammer Perpeteum Solids along, I didn’t take them. As a matter of fact, didn’t take any gels too for the whole 50K and survived with the drinks and food provided at each WS. Was really glad to arrive at the WS after what felt like a torturous climb. Took some biscuits, ate bananas and some chocolates plus drank a whole lot before continuing. And we had to still face another 1KM plus incline. Ugh ugh ugh…
Was really happy to see the sky overcast and when it started to drizzle, I almost whooped with joy. I don’t mind running in rain, done it a few times before although I won’t go out when there’s thunder and lightning lah…. Safety first.


But alas, it turned out to be a false alarm. Just a bit of drizzle and then nothing. Hmph.


Mercifully, after a total of about 9KM climb from the u-turn point, we finally see the downhill section.


There was a bit of disagreement between me and Zaini at this point as I wanted to run ahead and he kept telling me to not be in a rush. Then of course, he told me to run ahead if I wanted to chase my timing and I insisted to finish together. Still, there were some sections that I’d just run ahead and he’d caught up with me. I needed to run as it’s a tad painful for me to walk downhill instead of running it. 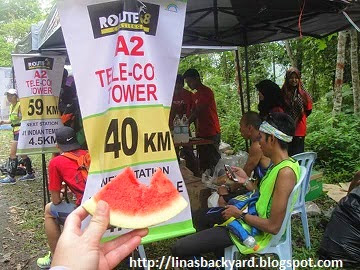 Arrived at KM40 WS and enjoyed some watermelons while I waited for Zaini. Me and the crew at this WS agreed that it would be nice if it rained a bit and that it was a perfect weather for an ultra that Sunday. (It did rain, but after I finished my run). 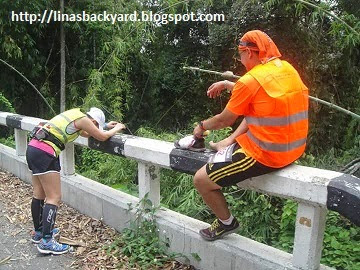 Zaini and I continued together but stopped a few minutes later, for some blister management. I didn’t pack a whole lot of stuff for this run but I did bring one essential item that I know I would need. A small tub of Vaseline.


I re-applied some earlier before when my foot felt hot to avoid blister from forming and Zaini needed to apply some after the KM40 point. I was glad that after this 50K, my feet were fine with no blister or any black toenail too. 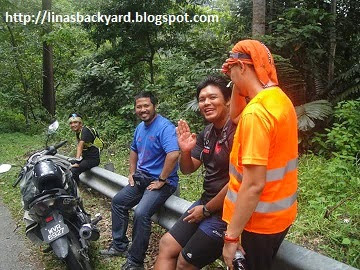 We then met a couple of friends and we stopped for a chat before making our way back to the finish line.


With about 8K to go, Zaini asked me about my target instead of just going by the “finish at 9hours cut-off”. He did know my target, as he had seen my post-it-note of it at home but just wanted to re-affirm it. It was 8 hours 30 minutes target and he proceeded to walk at pretty much a sub 9min/pace.
I struggled a bit to keep up that pace just by walking so I would run until I caught up with him and stop to walk and when I got left too far behind again, I’d run to catch up.


The final 4K was done by just concentrating on keeping up with him. With the pace that he was holding, I calculated we would finish in that 8:30 that I targeted.
And we did!


We started this together, and while we did left each other at certain stretches, we’d wait for each other and we finished together.


I’ve done a few 50Ks before (in races and doing LSDs with hubby) yet this Route 68 Challenge felt so surprisingly satisfying.


The route was challenging and interesting. The volunteers were all nice and cheery. Fellow runners were friendly and encouraging. I got my target and it was a PB for a 50K for me.


All in all, a great Sunday out for me. And hopefully, for Zaini too. ^^
Email Post
Labels: Close to my heart Itchy Feet Race Recap