I hadn't planned to run in any races this weekend despite my training plan requiring me to run a 5K park race with a 20-25min cool down on Saturday and a 3:30 long run on Sunday.

I figured I'd just wing both runs around my neighbourhood. Around my apartment's carpark, to be exact.

But at the last minute (Thursday, as a matter of fact) I confirmed my registration for a 10K run in Jog 4 Hope which was organised by Taylor's College Sri Hartamas. Just move the 3:30 to Saturday and run the shorter distance training on Sunday. 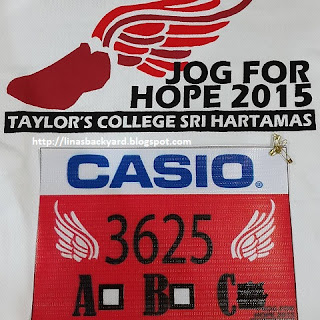 Registration was still open on race morning, I think. But I only needed to collect my bib and t-shirt a few minutes before the run.

Despite the last minute registration, there was no issue of t-shirt availability and I got my choice of size. 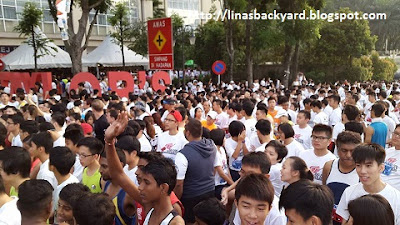 Despite many runners going to Kuching Marathon, Run with Us in Putrajaya or AK Balloon Run, there was a respectable crowd for this run; not only of the college students but for the Open Category too.

Even strong runners from certain running groups were running in this Jog 4 Hope.

The name is Jog 4 Hope but a number of runners sure wasn't just jogging today! They pushed hard!

But it was quite weird to see the 75 min pacer running faster than the 65 min pacers later! @.@

As I needed to do a 5K race pace, I started fast. Way too fast I think, especially as we faced an incline immediately as we start.

The first checkpoint and water station was located at KM1.6 (1 mile) mark and despite my intention of not stopping to drink (only 10K mah... So sombong. Hahaha); I stopped and took a sip of water. The volunteers were too nice for me to ignore them. Hah Hah

Actually, yes. A big pat on the back for all the crew and the volunteers of Jog 4 Hope. Helpful, organised, cheerful and friendly. Thank you.

The route was littered with hills and actually quite popular with runners for their training runs. But I myself have not run or train using this route before. So by 5K I was actually cursing at each incline I faced.

This was truthfully for me a really uncomfortable run. Both my knees had some pain issues and my left foot too. I had iced them the night before hoping that the pain will subside. I not only Rocktape my knees and my left foot for support, I opted to wear my compression pants for this run.

Wrong move, wearing that compression pants. My calves felt tight and it was really uncomfortable to run fast in them. I hadn't had any issues using them for my 50K runs though...

At around KM6, a runner said hi and asked me about my Sungai Lembing run. The same guy who said "Welcome to Seremban" when I did the Seremban Half Marathon in July. ^^

There was plenty of u-turns for the 10K runners and plenty of looping and the final u-turn was at KM7 mark. Then it's uphill again.

After the 5K, I chose to run only part of the incline and walk the rest. I ran the downhill and flat sections. After all, I got my 5K race pace already and I didn't really want to push all out. Not with a wonky knee and a problematic foot. 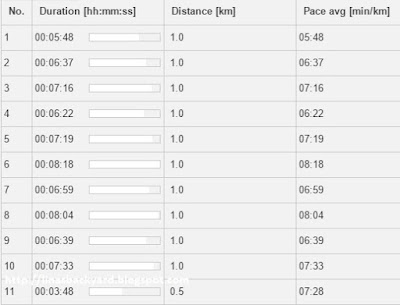 This is my first 10K for the year and well, I'm adjusting and learning to pace myself for shorter runs now.

Anyway, for a small race; there were distance markers available along the route. And the volunteers themselves were placed along the route with signs to go "Straight Ahead" or "Turn Left", "Turn Right" and even two who held a "Caution" sign at two uneven stretch of the road.

They were also very helpful at the water stations and all hollered words of encouragements to runners who passed by. Taylor's College volunteers, you ROCK!

Just as I was approaching 8K, I saw a boy swaying as he was running in front of me. When he stopped, I stopped to ask whether he was OK and I continued my run when I saw him flashing a smile. I guess he just need a rest before continuing.

Saw the 9K distance marker as we run uphill and by now I know I have about 1.4K to go. I knew the 10K route was overdistanced because I read a friend's race recap when she ran in Jog 4 Hope in 2013.

It was a downhill after KM9.5 which was nice but the last 200m was an uphill to the finish line. 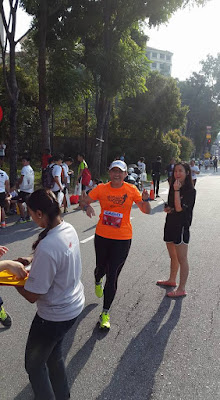 As I ran towards the finish line, a crew looked at my bib, shouted something to another crew and directed me towards the crew. 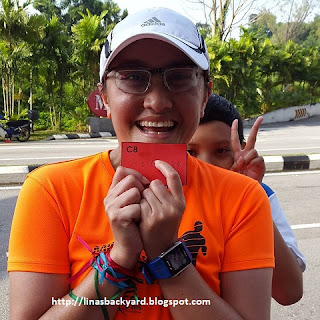 It was funny because before the run, Hubby had asked whether I intended to wait until the end of the program before heading back.

I told him we might need to, at least for the prize winning and cheque presentation ceremony to the beneficiaries of this run; Siddarthan Care Centre and Sinthamani Divine Life Centre Ashram. His answer was simply "look at the Women Open runners. Gonna be tough for you to get top 10". Hur hur

But anyway, only the top 5 runners get prizes. ^^

Following my training plan for a 5K race pace run (I still dunno what my 5K race pace is) and with the rest being a slower paced run; I'm happy with my effort. I probably could've run faster but I didn't.

And I realised that I need to do more hill training.

I envy those who train using this route. Sure power lah, hitting all those hills! 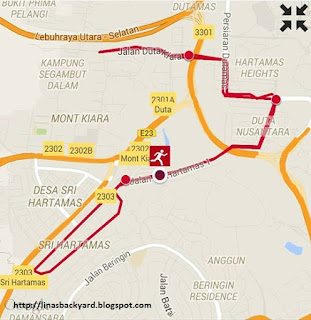 Overall, a very nice route and organisation of the run was good despite being handled by students.