So I entered another 10K run this week, after doing a 10K run last week at Jog For Hope organised by Taylor's College Hartamas.

Another 10K despite needing to do a long pace 19K run on both Saturday and Sunday. No biggie, I figured. I just add the extra 9K before the run itself. After all, I wasn't planning to run at race pace.  And I wanted to utilise the hilly 10K route of Larian Sehati Sejiwa into my training run so it's a win-win situation. Hihihi

Larian Sehati Sejiwa is held in conjuction of our Merdeka Day celebration and as a part of KL Lake Garden festival. 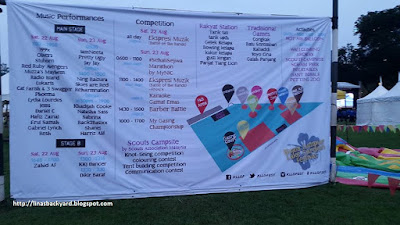 A whole lot of activities at the Run and festival site in Padang Merbuk during the weekend.

We walked around the field checking out the stalls that would be open later that morning, met up with friends and I even met my ex-schoolmate! 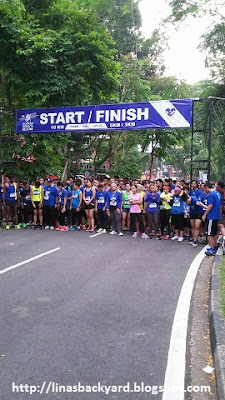 The starting and finish line of Larian Sehati Sejiwa was at Padang Merbuk and where runners would immediately face an incline as they start their run.

The flag-off was rather quiet (very) and we were let off with just a blast of horn at 7.34am (my watch).

Despite the late start for all the categories, I don't think most runners would complain as the weather was really kind to us on Sunday.

It was still cool when I finished my run! 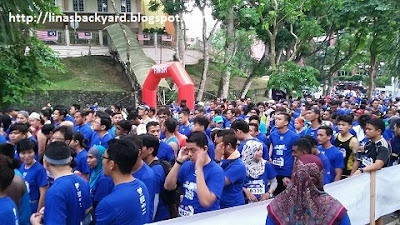 Much to Hubby's chagrin and despite Son's insistence that I joined the runners and start in front at the starting line; I started way at the back. Waaaaaay at the back.

I din't want to run too fast today and I actually wanted to do a slower pace than my half-marathon runs so I thought I'd be better off starting at the back.

I just followed the crowd and picked up pace whenever I could but I didn't really bother weaving through the 10K crowd that was running in front of me.

I was surprised to see a water station soon after, at 1mile mark. Although I didn't really need to drink in that early stage of my run, I decided to stop. Took a sip and thank the volunteers.

Saw a distance marker at KM2 mark which was nice to see.

There were distance markers located at every KM if I'm not mistaken, but I think the KM3 to KM6 markers were located 1KM in deficit. KM3 marker should have read KM2 and so on. But it was corrected when we got to Tugu Negara. 8K done and 2K to go.

I saw another water station at KM2.3 which again surprised me. I have to say, for a 10K run; the organiser was really generous with the water stations. And of course, since I wasn't that much in a hurry to finish, I stopped at every single water station.

Always am compelled to stop and thank volunteers, me. Hahaha

By the time I reached KM6, 10K runners merged with the 5K runners and the road was congested with the runners either running or walking, many were pushing strollers, making it hard to weave through them or even to run. At certain stretches, I just walked until I got a clear path to run.

I wasn't stressed out too much about this. Actually, I have respect to the parents who were out with their kids on Sunday.

There was a lady who not only pushed her daughter seated in a stroller, she was also carrying her baby in a baby carrier! RESPECT!

But I do appreciate the effort of a fellow runner, Irwan who was shouting from behind and asking walkers to keep left and let runners to run on the right side of the road.

When he overtook me and other runners, he became like an ambulance and us, the motorbikes following the clear path the ambulance made on the road. Hahaha

Saw a few friends doing the 5K run here too and teased them to keep left. Hihihi

We reached KM8 by the time we got to Tugu Negara and it was downhill from there until we reached Padang Merbok again. Said hi to a couple of runners and shot straight ahead.

But instead of turning left for the field like the Multi Purpose Run would, we continued straight towards Bank Negara.

And faced another incline. Damn. 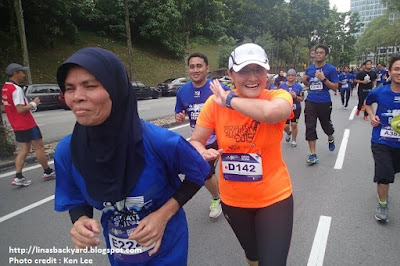 Halfway up the incline, I was walking again as the crowd had pretty much slowed down at this stretch and I figured I do the same too.

Until I heard a loud voice somewhere up the slope telling runners to run and not walk.

It was a familiar voice so I started running just so I can whack the fella! LOL

Thanks Ken for the motivation. 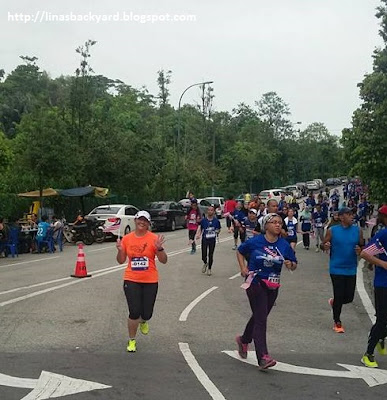 After the incline, it was blissfully a downhill for a few hundred metres as runners approached the finish line. Instead of going full speed ahead, I slowed down to say hi to a friend who was running with not only her kids but also her friends' kids. Respect you, Gai!

Then saw a fellow runner helping to distribute the Jalur Gemilang and I stopped to get one for myself. Yup, that one I was holding in the above photo.

Saw Hubby and Son waiting for me so I waved hi to them before running towards the finish line. 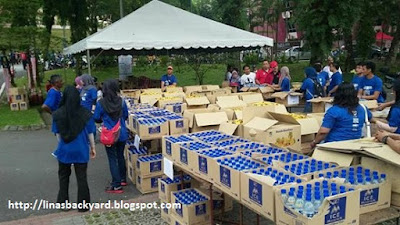 Got to the finish line, excitedly greet friends who were there waiting to support and then made my way to get my water, bananas and medal. 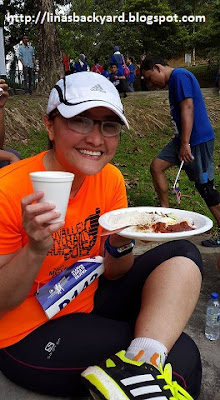 And later, indulge in Nasi Lemak provided by the race organiser. They provided a buffet for everyone! Nasi lemak and teh tarik. Om nom nom...

We were supposed to go to UTC later that morning but we stayed back until 11.00am for the generous lucky draw. Well, didn't win the motorbike or the bicycle or the shoes. Hahaha

And only got to UTC Pudu Sentral at noon after I had my shower at the shower/toilet at Lake Garden. 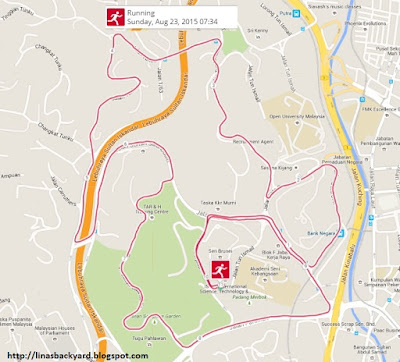 All in all, it was a good run. A fun run with friends. And seeing that I somehow bettered last week's 10K timing was an icing on the cake. 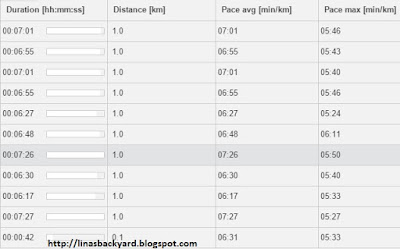 As Hubby mentioned, I probably could've finished much faster if I started early and not get caught up  in a congestion with the 5K runners later. Or stopping at every single water station. Or slowing down to disturb friends.

But that's my joy running in a race.

But yes, if I indeed need to do a fast pace run, I might need to forgo fun and be more focused in my run.

Still, I was happy with my run on Sunday. ^^
Email Post
Labels: Itchy Feet Out and About Race Recap