Now, where do I start?

Let's start with the fact that I registered for the 50K category for King of Sungai Lembing months ago. The run which was held earlier yesterday, was my 2nd 50K trail run this year.

The first one was the Gunung Nuang Ultra which was a loop format ultra.

King of Sungai Lembing also happened to be my 2nd non-loop format 50K run; the first one this year being the Route 68 Challenge which was a road run event.

Even before I registered for the race, when the route map had yet been finalised and published, I PMed the RD to ask his opinion on me getting by the 9-hours finishing cut-off time. It was after getting his reassurance that I finally parted with my RM117 (after getting discount as a participant of the previous King Series Run) and registered myself. 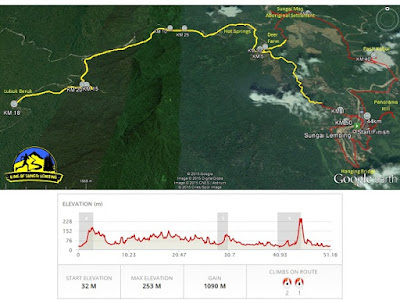 I tried doing my homework by poring through the elevation map and studied the water station locations so that I could run prepared. 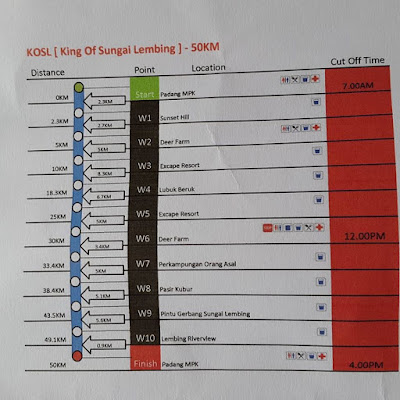 The water stations details that I printed out.

The aim for me at this point was to get to water station 6 (W6) before 12 to be able to continue on. W6 was where runners' special need bags were placed and I had envisioned it will be where I could use the toilet, wash up, maybe change, rest, lie on a cold cement floor maybe... 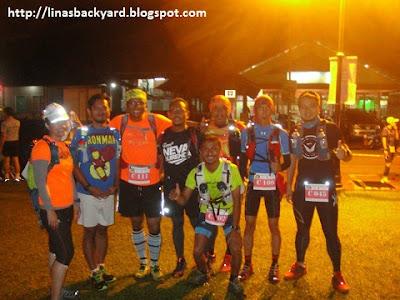 The flag-off category was at 7am but there was a briefing for all runners at 6.45am.


Knowing that I would be facing a rather steep incline just a few KM from starting, I started easy. According to the water station details, we would run up to Sunset Hill for 2.3K before we get to the first water station and then another 2.7K to get to the second water station at KM5.

Well, that's how I read it. I later realised I had been wrong since I wrongly read the location of the water station where the food were located. Ah well, I'm new at this hardcore trail running. We live and learn... 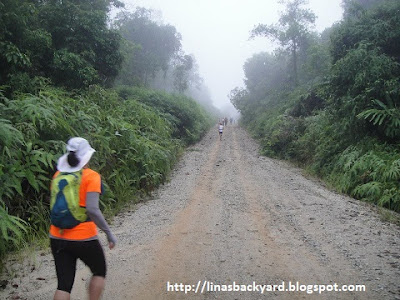 We started off on the road and then we hit this gravel road. The organiser had mentioned in their website that there would be rolling hills after KM30 but seeing the elevation map and finally running on the route itself, the rolling hills actually started almost immediately. 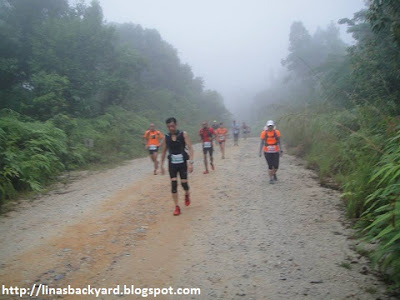 My approach at that time was simple. I targeted to run faster than 10min per KM. I'm not really good at trails, preferring to hike than run on it and I definitely did not want to exhaust myself very early during the race for trying to run up all those long and steep inclines. Target : 1K = 10min. 6K = 1hour. 30K = 5 hours. Easier said than done. Hur hur.

For the first 15K, it worked quite well. I ran between an 8-9min pace which gave me a bit of buffer to reach W6 within 5 hours. 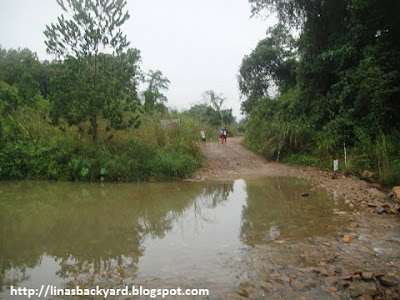 There were a few river crossing that we encountered along the route and when we u-turn and faced the same route, it was really nice to have the river to cool down a bit.

No issues wading the river with my shoes on for me. My Inov-8 shoes drains water perfectly well and I didn't feel any sploshing as soon as I got out of the water to run on the road again. 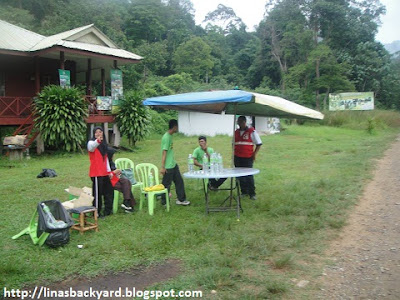 W3 was (at what I thought of) at KM10. Seeing only a few of mineral water bottles available, I skipped this water station as I still had my 1ltr plus of water with me.

One of the mandatory requirement for this run was we need to carry at least 1ltr of water with us or faced a DQ (disqualification).

I had full intention of refilling my bottles at the next water station which was located 8K away from W3. No problem, I thought. 1ltr of water would be ample to last me that 8K.

I saw the first runner of 50K category making his u-turn as I reached KM13. Then onwards, more and more runners were also making their u-turns (u-turn located at KM18.3) later.

It was rather nice to bump into runners even as they were running so much faster than I did. But as early at KM16, runners started reminding us who had yet reached the W4 (water station 4) to conserve water as the water station had totally ran out of drinking water.

So with whatever left in my bottles, I continued on, feeling a bit negative and trying hard to uplift my spirits.

I reached KM18.3, got my bib ticked and made my u-turn. Even after KM18, there were absolutely no other fueling provided other than drinking water. Mineral water.

It was clearly shown in the WS list above but I was still surprised at the fact that they serve a LITTLE bit of watermelon at W2 located at KM5 which somehow felt catered more towards the 21K runners and no more until after KM30. I later learnt that food was provided at KM33 plus.

I guess I got a little bit pampered by my experience at the road ultra, Route 68; where they served mineral water and coke & 100-Plus plus snacks at alternate water stations.

Again, as I said, I am very new to trail race. Not used to hardcore running where self sufficiency is needed especially for slow runners like me. I don't think the fast runners had any problem. Hah hah.

With my own water stash running very low, I only managed to get it replenished at KM24 where a truck had stopped and two crews were helping runners filling up their bottles from the truck. A total of 14K before I could refill my bottles.

It's hard being a slow runner, that I can say. Actually, those who were 30-45min in front if me didn't fare much better either as they also experience drinking water shortage.

By KM28 I knew that I would arrive at KM30 checkpoint after the 12pm cut-off but I still continued as I had no intention to give up until the organiser said so.

By now, trucks filled with runners who chose to DNF or those who was clearly not able to meet the cut-off went pass.

At this point, I was with two other lady runners and we decided to get to KM30 together. Quite exited as we were nearing KM30 as per our GPS watch, we were a bit disappointed when after 30.5K, there were till no sign of the Deer Farm water station.

This was where our special needs bags were dropped off and I had envisioned to sit under a cool shade, relax, change my sanitary pad... etc.

Turns out that we still had an extra (or two) kilometres to go to reach the checkpoint.

Finally after 31.5K (according to my watch) and almost 32K (by the other ladies), we got to KM30 checkpoint. As we reached it after 12pm, we got our bibs crossed off and were disqualifed and unable to continue the race.

At this point, I notice a whole lot of bags placed on a table under the hot sun in the middle of nowhere.

I asked a fellow runner what was available at this CP and she replied, just our bag. No drinks. No whatever. 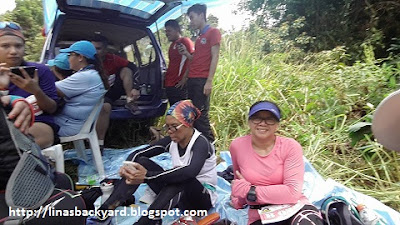 And the envisioned rest under the shade turned out to be a tarp placed on the dirt for us to sit on.

I was just thankful that it didn't rain because I pity the crews who didn't seem to have any cover against the sun or the rain. Or our bag too, for that matter.

I was glad that I had stocked upon food and drinks as I pretty much survived the whole of 30K using my own stash. If this is how trail running standard goes, it is sure hardcore. Hardcore for runners and even hardcore for the crew and volunteers.

The crew left a lot to be desired for, but to see them standing under the hot sun without any facilities set up for them is kinda pitiful. Who can blame them for not being responsive to runners when they are themselves tired?

I had been pretty blessed crewing for two ROAD ultras with better facilities before. 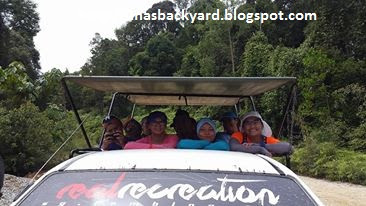 The non-finishers were later taken back to the start/finish line in this truck which kinda make not finishing a race quite FUN!

Damn exciting riding this truck man! It's like riding a roller coaster! Hahaha

The organiser chose to be very strict with the cut-off this time perhaps to set a standard. International cut-off time too, if I may say so.

I'm not arguing to their decision as that's their prerogative but I do wish that they'd ensure at least a few distance markers placed so that we runners could compare on the distance the organiser calculated with our GPS watch reading and adjust accordingly.

I salute them for making a strict cut-off for what seemed to be a laid-back kinda race at first and I also salute all of us runners who were brave (or stupid) to attempt it. This race definitely is not for us slow runners. And definitely out of my league for the time being.

I would usually like to retry any races that I feel I haven't done well enough but for the time, I don't fancy a repeat on this. Not yet.

Don't get me wrong. The route was challengingly nice.  I love the route. Pity I couldn't experience the balance 20K.

It's just out of my league.

Life continues.
I'll be back with my training next week for the race I've been looking forward to do for the past few months.
At least I got my Sunday 4 hour 30 min run that I was supposed to follow in my training plan done. ^^

To those who made it to the finish line before 9-hours, SALUTE! Congratulations!