Frost The Trail Run At FRIM

Frost the Trail KL Corporate Challenge is a yearly Green CSR initiative organized by Frost & Sullivan. 100% proceeds from the entry fees from the run will be given to pre-appointed beneficiaries and this year they are supporting the flood relief through MERCY Malaysia.

I was lucky enough to be able to get two slots for the run through Maxis and duly registered Hubby and myself into the 8K individual category.

It was a rather smallish corporate event, with just a few hundred runners in both the 8K individual and also 5K team category but it was a commendable turn-out and run nonetheless.

As most runners coming from the corporate sponsors, everyone seems to know everyone. Maxis, the platinum donor of the run had a contingent of 200 runners. 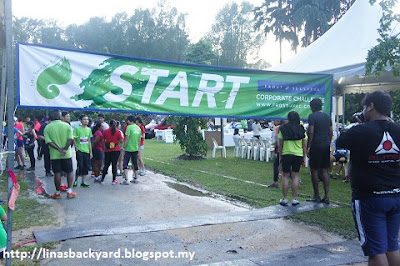 Runners mingling about the field area at the starting line. I met with an ex-schoolmate who works with one of the corporate sponsors and also a couple of running buddies. 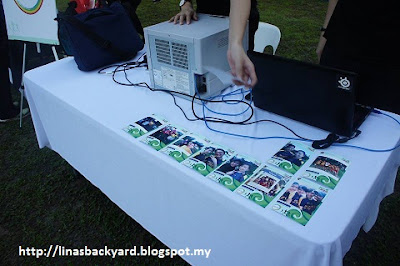 A photo station printing photos of runners who posted their photos on IG with the hashtag #FrostTheTrail. 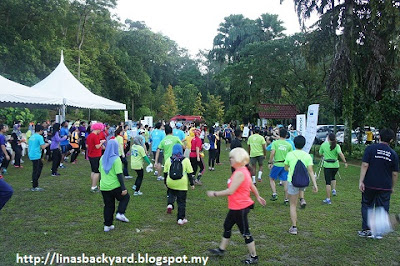 Jazzercise session held before the run. 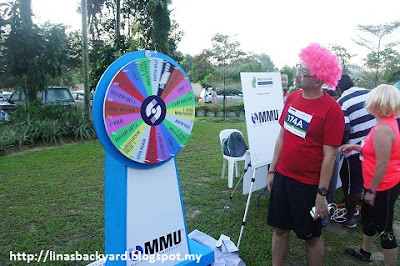 MMU even had a wheel of fortune thingy for runners to win prizes at their booth.

The 8K category was flagged-off at around 7:20am and we ran through a stretch of road before hitting the trail section.

I started way too fast, at pace 5:48min/km although my initial place was to hit the first 5K at a half-marathon pace (which was what I needed to do as per my training plan). I slowed down significantly to running at 7:30min//km pace after a mere 2.5K and after we started to enter the trail area totally.

The run was a tad uncomfortable for me. Not because of the route or the elevation but for my choice of running pants! I wore a new Mizuno long pants for this race with a side pocket for my handphone. Wrong choice. Because of the weight of my phone, by KM1 I could feel my pants kinda slipping down. So as I was running, I had to keep on adjusting my pants so it would go up. It would probably be better if I just stop and adjust it but the thought never came! Hahaha

And my panties kept on giving me a wedgie and I kept on having to adjust it too, in full view of other runners at my back. Hadoi.

Imagine having to adjust the pants to go up and stay at my waistline then pulling it slightly so that it wouldn't give me a wedgie too. Huhuhu

But on a positive note, the route was nice and I even saw a waterfall while running! Cool!

I was wary about spraining my ankle so I went slow once I hit the trail. At times, when there were too many stones and uneven surfaces on the trail, I slowed down to a walk.

And it was indeed reduced to just walking as I approached KM6 mark and where runners started to face a long 1K incline.

Although I started going downhill as I approached KM7, I had to still be careful about running for fear of falling flat. I'm still not good at running trails so I had to be extra careful on the trail.

It was supposed to be an 8K run but we were still running in the trail area as I approached the KM8 mark. And from the looks of it, the finish line isn't that near yet!

At 8.5K mark, with 500m more to go and because it already exceeded the supposed 8K trail run, I just walked until I was about 200m away from the finish line. Hah Hah

Extra distance notwithstanding, it was indeed  nice run with a good route to challenge runners.

After the run, we were given a nice Columbia Finisher t-shirt (no medal) which I really like and after Hubby finished his run, we went to collect our goodies bag and snack pack.

A nice breakfast of nasi lemak and fried bihun was served to runners.

We stayed behind for the lucky draw but alas, we weren't so lucky this time.

We made a move a few minutes after 9.00am as Hubby needs to get to work while I decided to continue my training and later did a 90 minutes run. I kinda suck at the hill section at FRIM so during the 90 minutes, I focused on tackling inclines, albeit at an easy pace.

I stopped by at Gardens Mall Fitness First to shower and rest before taking a bus to meet hubby later in the afternoon and head home.

All in all, a good day spent.
Email Post
Labels: Gardens and Parks Itchy Feet Out and About