I did my third half marathon for the year at Bukit Jalil Half Marathon last Sunday. I've always liked the Bukit Jalil route and had joined it in 2013 (when it was called Brooks Half Marathon), 2016 & 2017.

There's a slight change on the route this year compared to last year and it did make the run more interesting as we weren't running the same route over and over, year by year.
Because of the small area at the Start/Finish line, female runners were flagged off 10 minutes earlier than the male category.

The traffic control by traffic police, police (or polis bantuan?), RELA and marshalls were awesome! Every single junction was manned and they ensured that traffic was managed.

Sure, at certain big junctions we had to wait for the police to let the vehicles pass through first before us runners could continue our run, but no biggie. Better slow than sorry!

Thank you all for the encouragement!

I was just plodding along, as I don't have any target time and I did told Hubby that I plan to do it in 3-hour! Hahaha

Anyway, just as I reached KM8 mark, I felt and heard this "phlep phlep" sensation and sound on my right foot. Turned out that the "tapak" of my right shoes had half came off.

It was distracting not to mention irritating so when I reached KM9 (3rd water station), I asked for a scissor from the medic who was stationed there and cut the offending tapak. OK, time to buy a pair of new adidas! *sponsors welcomed*

A few friends passed by and said hi as I continued to plod along slowly.

Finally I finished the run, keypoh at the booth set up after we crossed the finish line to scan the QR code to get our results immediately. Then, after collecting my medal and finisher tee, it was a beeline for the cendol (taufufah had finished when I got there) and also ate lots of watermelons!

It was a good run and I was glad I did it because I initially thought of just "sambung tidur"when I woke up. So lazy to go run! LOL 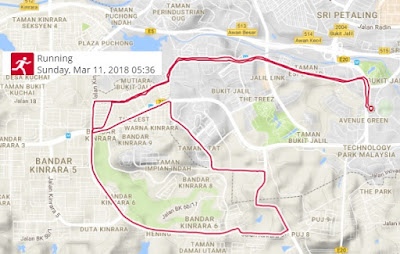 Some photos taken at the Finish line of Bukit Jalil Half Marathon can be viewed Cik Arnab & En Kura-Kura FB page. There are 3 albums in total.