We heard kittens meowing from under our one of our neighbour's car since Monday but every time we tried to look under it, the kittens quiet down or hide.

As we didn't know how old the kittens are and who was the mother (it might be one of the 3 female strays that we fed in that area) so we just left some kibbles under the car to entice the kittens to come out. (Just like how we did when we rescued "Acham" way back in 2015). 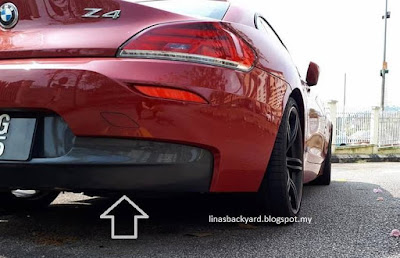 Anyhoo, good thing the car stayed stationary for these past few days but we needed to urgently rescued the kittens last night because we saw a kitten's body dangling from this car (where the arrow is). Its head was stuck and just the body could be seen.

I had at first thought it was dead and was quite reluctant to check but Hubby insisted we checked and Son wanted to bury it, if it was really dead.

Good thing we checked because we heard a soft meow from it when we crouched down to check. 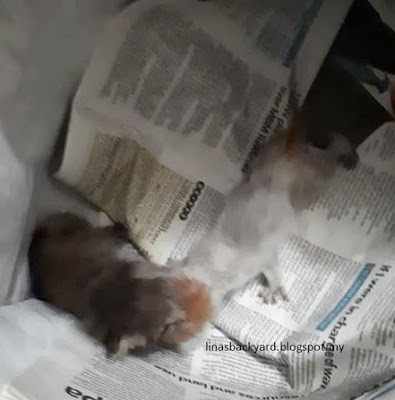 There were two priorities that night:
1. Feed the kittens as they look weak so Hubby & I dashed to a nearby pet store to buy Kitten's milk.
2. After that, we tried to locate their mom. Because it is always better to get the newborn kittens back to their mom.

Couldn't find two of the cats we usually feed and one that we found, sniffed at the kittens and kinda reacted violently by trying to snatch away one but dropping it later. She left later so we decided to bring these two back home. 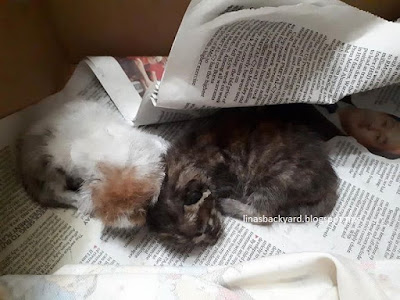 Got a box, lined it up with newspaper and a piece of cloth and after feeding, and initial meowing and trying to suck at whatever they thought was Mommy's nipples, they slept.

And slept soundly and quietly until the next morning.

We tried to locate their mom again this morning. 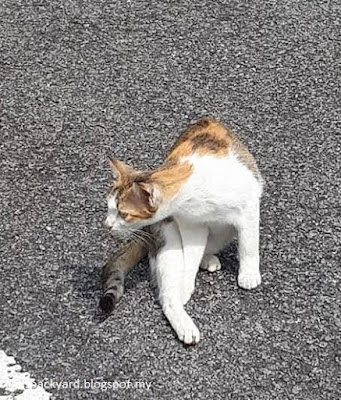 This cat that we called "Tompok" came and sniffed at them but then distanced herself from the two kittens. But she remained somewhere nearby and kept coming to sniff and then left.

If it is indeed her kittens, it may be because the kittens had smelled different because we had handled those two earlier. She had given birth earlier but we couldn't locate her kittens' whereabouts.

But I kinda think that the kittens were offspring of another cat that went missing since last Wednesday.  One of the kittens look exactly like her and she always popped out from somewhere nearby the red car where we found the kittens.

We tried to check with our apartment's cleaners but they weren't sure although they remembered seeing her somewhere nearby the covered carpark area. 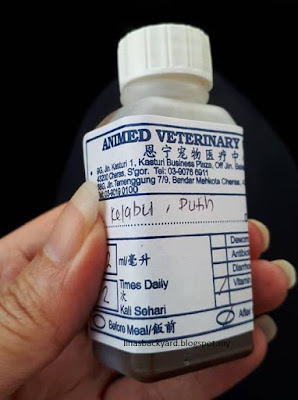 Anyway, in the meantime, we took both kittens to the vet and was relieved that they are OK. A bit weak but no infection when the vet checked their blood and because they are still so young, the vet didn't prescribe any antibiotics. They were given this vitamin and they took it really well. 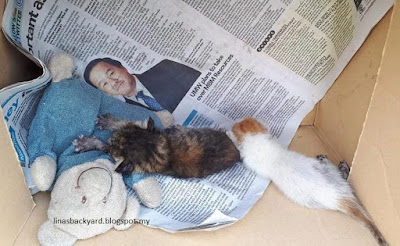 Giving them milk today was much easier with tips from the vet, compared to following on how those youtube videos showed.

We'll try and check their mommy again later and also, feed them again once they wake up.

At the moment, they are sleeping peacefully.
Email Post
Labels: Close to my heart