Merdeka Day Out With Our Foldies

Just like on Aug 30, we decided to head back to Putrajaya to cycle the next day.

But unlike the day before, we started our ride on Aug 31 from Presint 15 and head towards Alamanda then the Core Island. That meant, we partially used the main road to cycle before using the pavement for joggers/cyclists (which motorbikes used too and the random stray cars.) 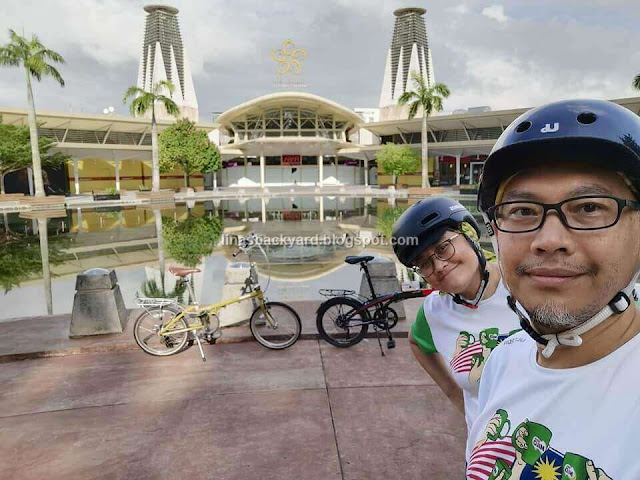 First photo stop of the day - at Alamanda Shopping Centre because I wanted to take a photo here. From Presint 15 to Alamanda and later to Everly Hotel was a rather nice downhill route but that also meant, we'd be going uphill on our way back!
Then we started cycling on the pavement towards Masjid Pink (it was the reverse route of what we'd normally do). 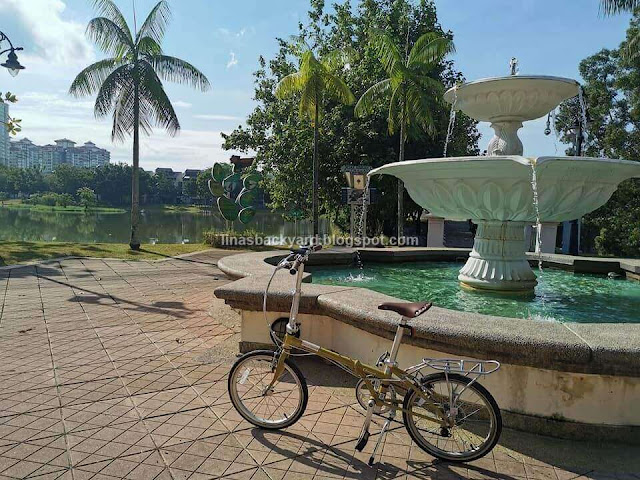 On this side of the route, there are plenty of nice sights and this cool fountains to see.
You'd be able to bird watch while you cycle or jog here too. 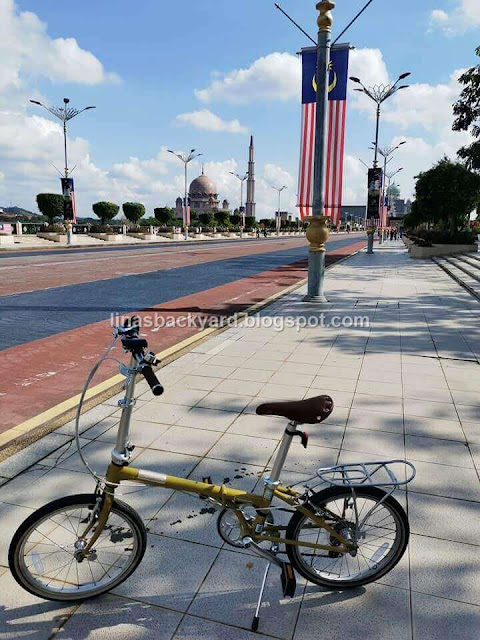 Heading up to the road towards Masjid Putra (or more fondly known as Masjid Pink) and later towards Jambatan Putra meant a climb up a hill as we cycled up through a nearby carpark. 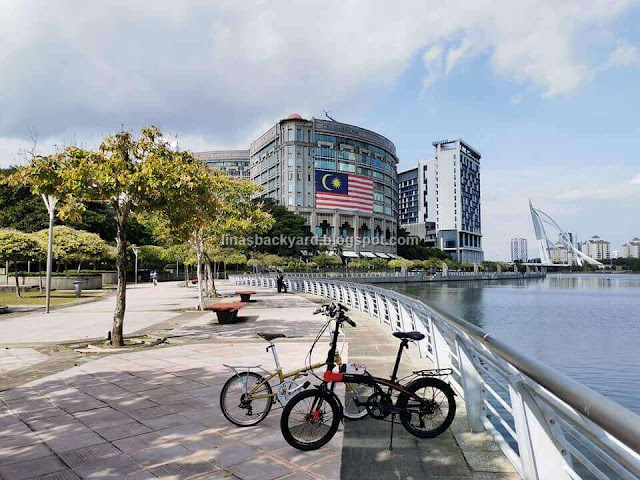 While the area was abuzz with activities and visitors the day before, it was pretty quiet as we cycled there on Merdeka Day.
I guess people went elsewhere for their Merdeka Day celebration. 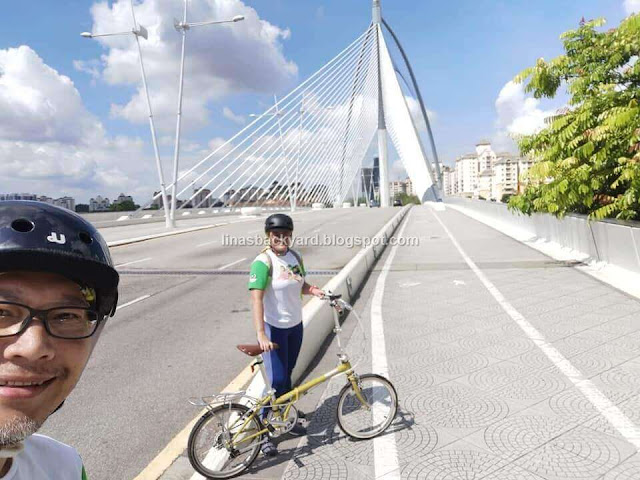 We then crossed Jambatan Seri Wawasan and cycled to Ayer 8.
We did 20K by the time we reached Ayer 8 so we decided to stop there and bought some drinks at Tealive.
A few minutes after we started to cycle again, it rained and we decided to take shelter for a while. We have no problem running in the rain but we'd rather not cycle in it!
Fortunately, it didn't last long and soon after, we were back pedaling. 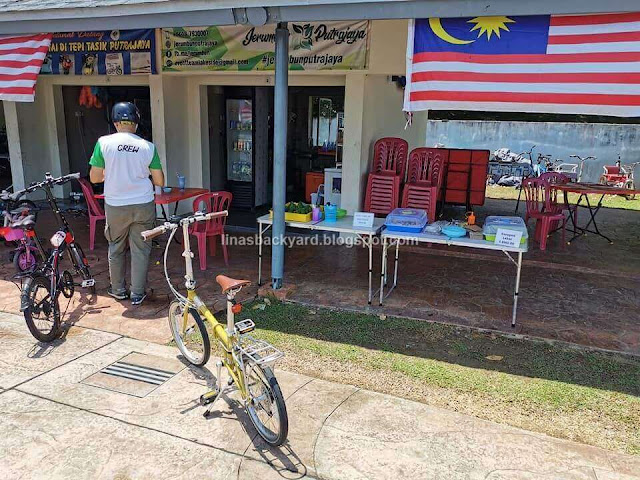 From Ayer 8 we cycled towards Presint 7 and later Marina Putrajaya before heading to Taman Seri Empangan.
Nearby the Jambatan Seri Gemilang, there's a row of shops that offers bicycle rentals and also this nice snack shop.
We stopped there to buy some cold drinks and had a nice chat with the owner. 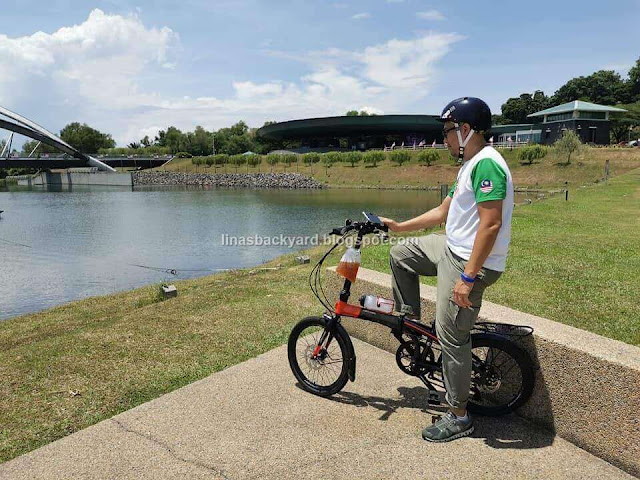 With our Teh O Ais Ikat Tepi, we're ready to hit the road/pavement again and now, towards Taman Seri Empangan.
Instead of going back to the Core Island route, we entered the main road and cycled towards Alamanda. There is a motorcycle lane but it was bumpy and filled with debris so it didn't feel safe at all. We just kept left on the road and luckily,  the road wasn't busy. 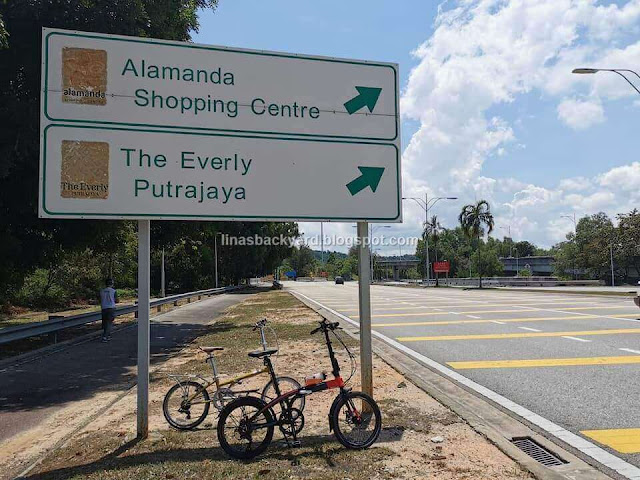 We did 31K by the time we reached here.
There are uphill sections if we continued using the main road but there is a lakeside jogging/cycling path just up ahead and we turn and cycled there, away from the main road.
We exited this Presint 16 path and cycled along the neighborhood road in Presint 16 before arriving back to Alamanda. 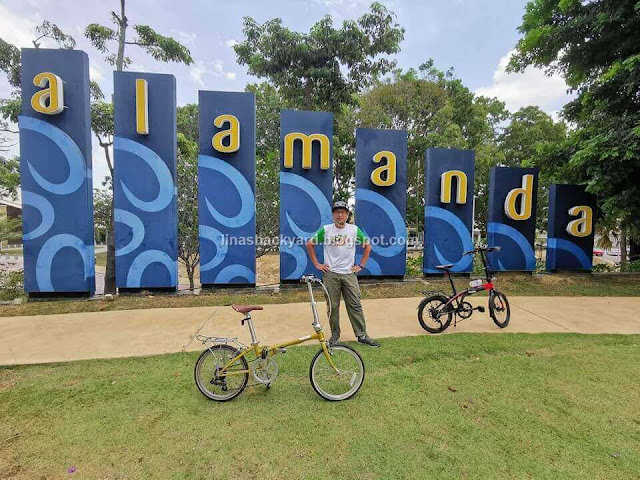 A photo stop after an uphill section in front of Alamanda - Shaftsbury Putrajaya Mall. 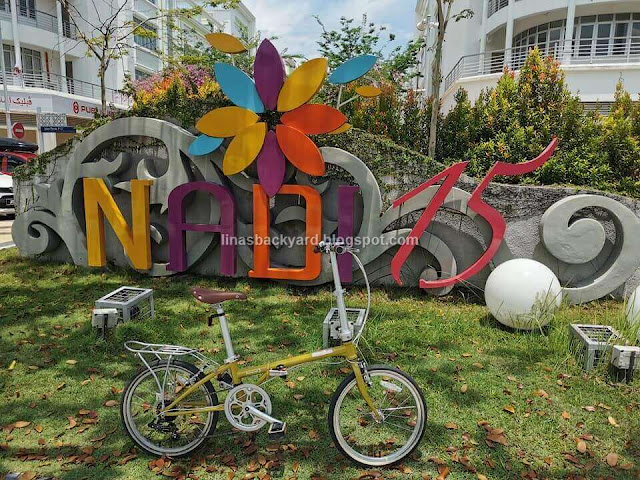 From here, we cycled back to Presint 15 which was pretty heavy with traffic by the time we got there. 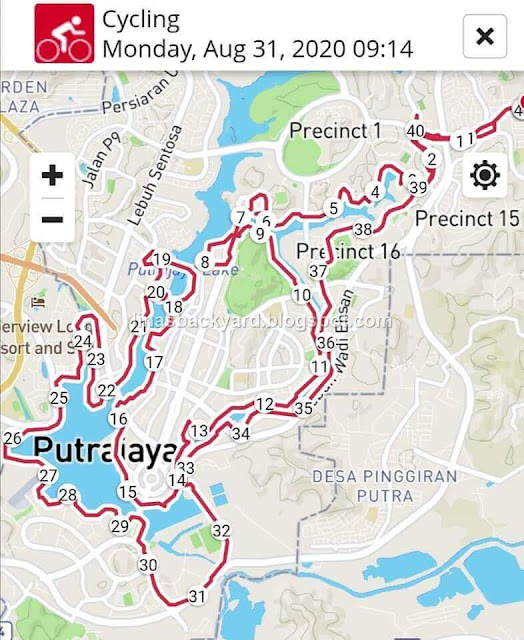 We did 31.80km on Aug 30 and on Merdeka day itself, there wasn't any significant mileage that we wanted to do. Anyway, we managed to do 42.15km that day.
I was pretty happy with it, especially considering I needed to clock in some running mileage on both days too! Hubby and I joined the Larian Enam Tiga Virtual Run and did 6.3km on Aug 29, 30 & 31. We both managed to get a free t-shirt as the top 63 finishers for our effort.
Email Post
Labels: Close to my heart Foldie Adventures Gardens and Parks Out and About Travel Travel - Putrajaya