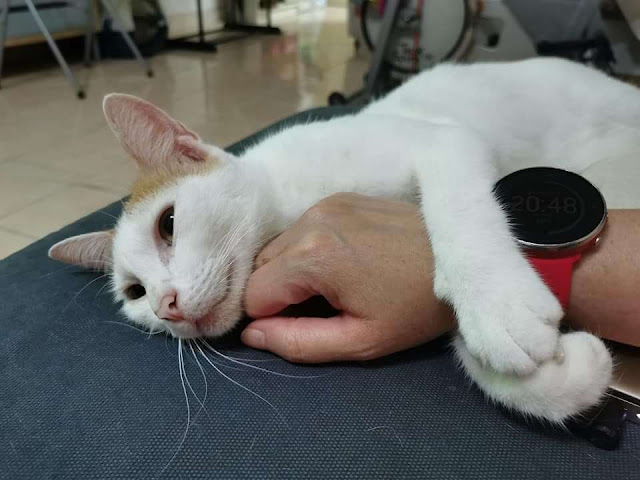 On Tuesday Oct 20th, 2020, we lost our beloved cat, Putih due to feline infectious peritonitis (FIP).

Feline infectious peritonitis is an immune-mediated disease produced as a result of infection of macrophages by mutant feline coronavirus strains. This disease causes severe multi-systemic clinical signs in the domestic cat, and other members of the Felidae family. Ultimately, FIP results in the death of the affected animal. FIP has traditionally been divided into 2 presentations: effusive (wet) form and non-effusive (dry) form. Both forms of FIP have been associated with clinical signs affecting the neurological system, but the non-effusive form appears to more commonly involve nervous tissues. The effusive form of FIP is more common than the non-effusive form and FIP has been diagnosed histopathologically in brains of cats without neurological clinical signs. 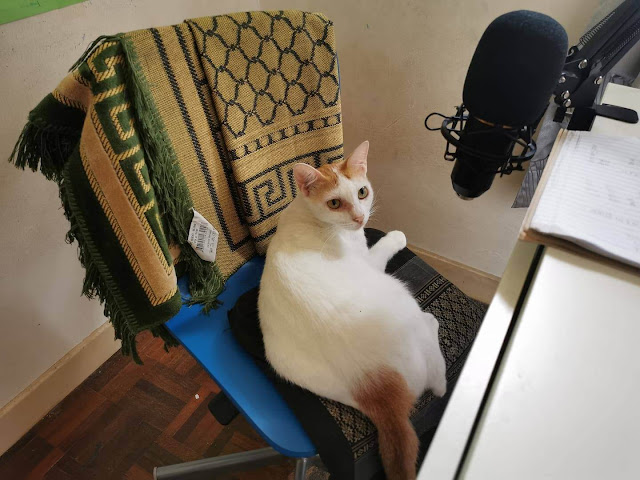 Looking back, she had shown signs of lethargy since April. She slept more frequently and didn't want to cling or spend time near us as much as before. But at that time, we just thought it was normal cat behaviour to sleep a lot and be lazy. 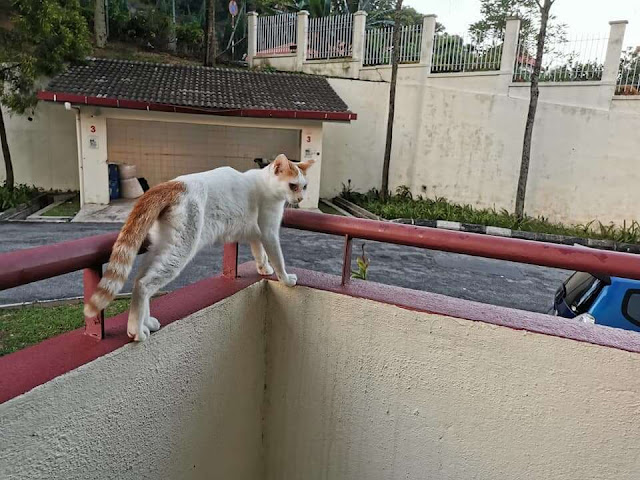 However, it was in August that we started really noticing her losing weight and not eating.
She was an extremely picky eater at normal times, so when she got sick it was much more challenging to get her to eat. 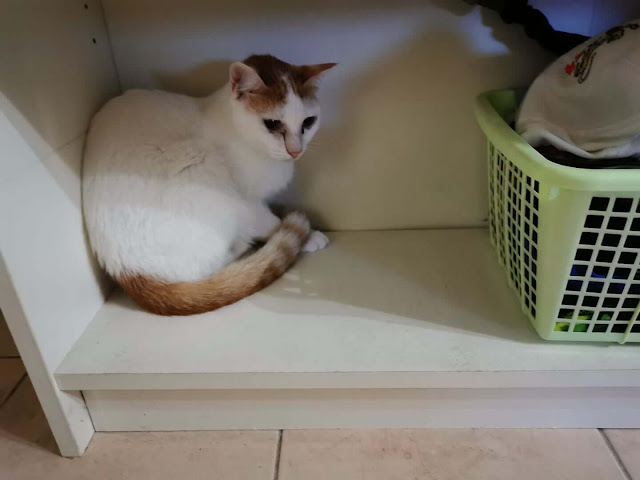 She also started to prefer hiding. Noticed her "comot" eyes? That's her eyes "bleeding", one of the symptoms of FIP.
She also looked like she had developed a fever so we sent her to the vet. She was given some antibiotics and other medicines to take.
Putih hated medicines so it was a challenge to get her to take them. 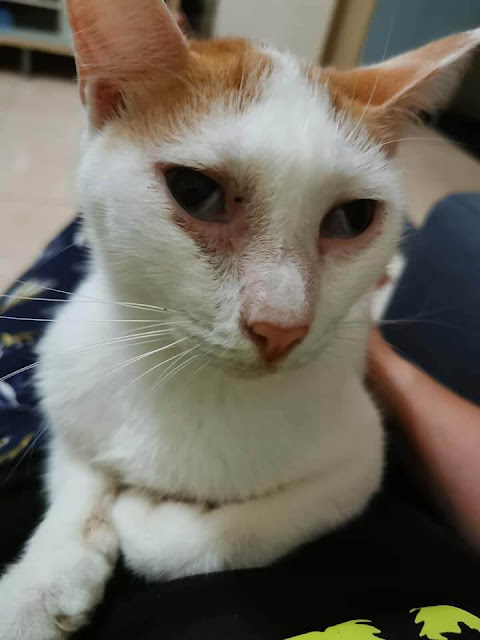 Despite taking the medicines, she still had no interest in eating and kept losing weight. So we sent her to the vet again, and this time, the vet told us she needed to do a blood test for Putih.
We left her at the vet for the test, and later received the results. 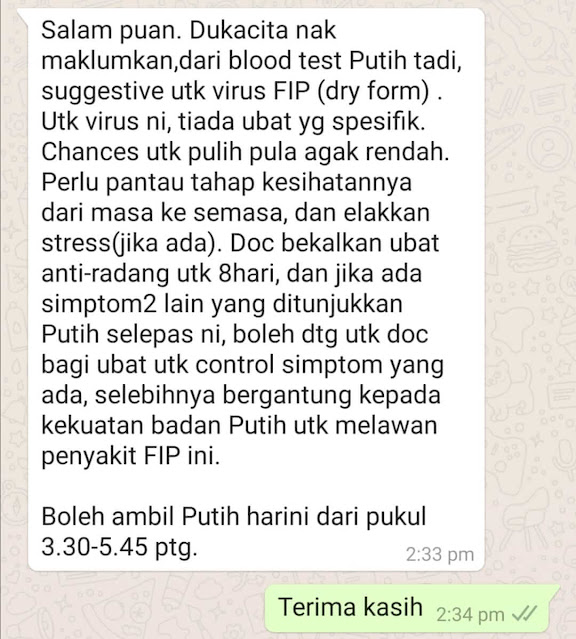 It was a sad news for everyone, but I guess I was still in denial and had hoped that Putih would be one of those few cats that would somehow conquer this illness. 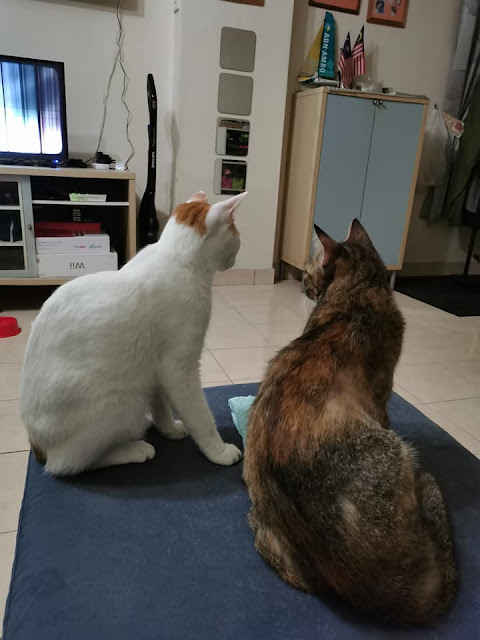 It was a weekly visit to vet after that. 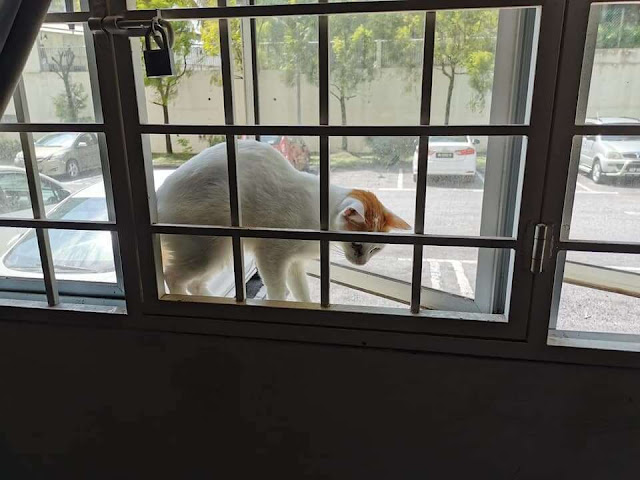 At first, she showed signs of recovering. 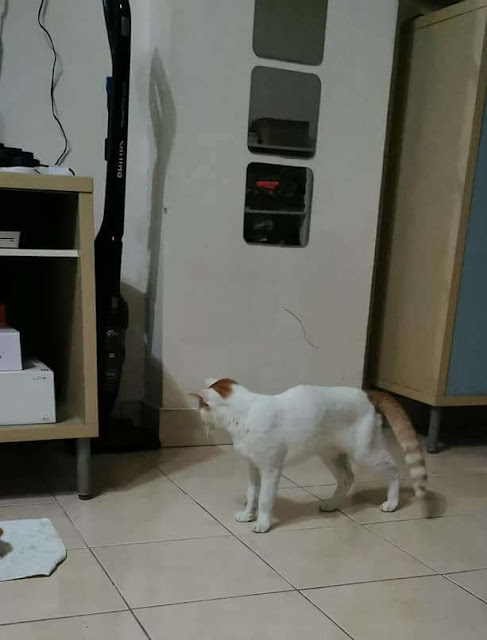 She wasn't as active as before, but she could still move and jump around and spent time perched on the window or balcony (her favourite spots). She started putting back some weight too, so the vet decreased her medicine dosage and we got a little bit more hopeful.
Her hind legs weren't as strong as before though and she would sometimes walk unevenly.
However, she started developing extreme distrust and phobia towards me as I was the one administering her medicines.
She would refuse to eat at night because she knew it was medicine time soon after she had her dinner. It was heart-wrenching to see her cowering away from me because she was the one who liked to cling to my arm when she was healthy.
I started coaxing her to eat by buying all sorts of cat treats that we normally wouldn't buy just so I could make her eat.  I would also mashed up her dry food and feed it to her, apart from feeding her wet food. Anything just so that she'd have some nutrition.
Things got worse in late September, a month after she was diagnosed with FIP. 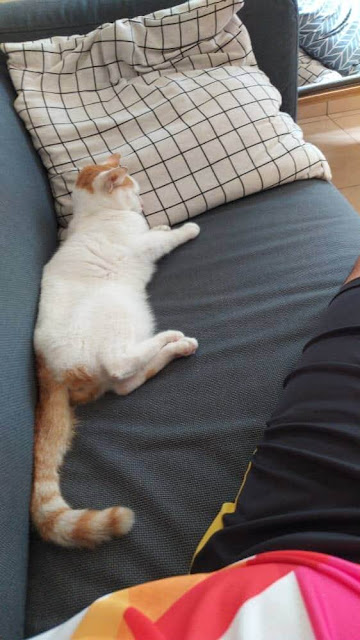 When we returned from work, we would find her sitting on the sofa which was a no-no for both our cats. But we let her stay there to make sure she felt relaxed and happy. 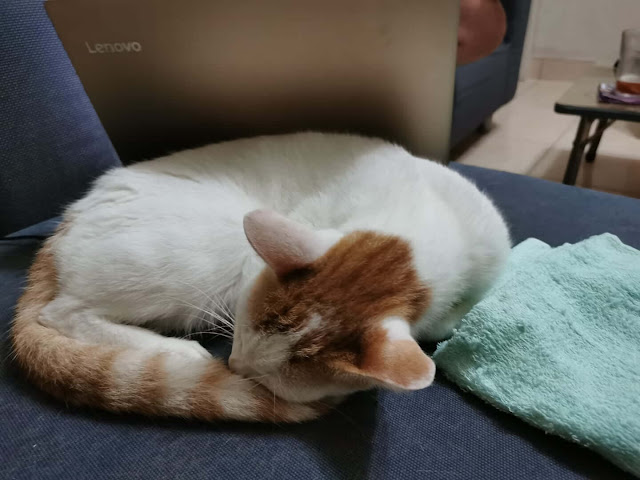 She got much weaker later on and started scooting to move around as she was unable to use her hind legs. There were a few times, she fell from the sofa as she tried to get to the litter box. 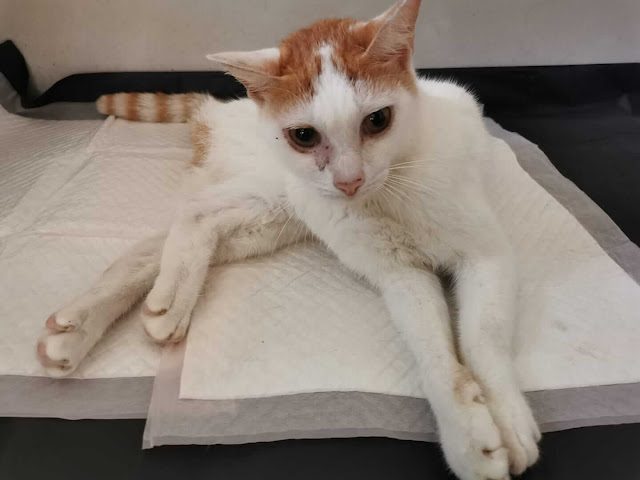 When she started getting really weak to move (but she tried many times to move around, our strong-willed little Putih), we got her these pet sheets so that she can pee or poo there. We also bought some cat diapers for her, but we never did use it.
This photo was take on Oct 2nd, 2020.
We started to change our daily routine, waking up much earlier to clean and hand-feed her every morning before going to work and tried to massage her legs to kept circulation going.
We asked her to hang in there and wait for our Son to return home for his mid-term holiday. The night our Son returns, she left out a soft meow upon seeing him. She hadn't made any noise since she lost her ability to move around.
It was a bittersweet moment for everyone.
She loved her creamy treats and I fed her water through the syringe. At first, she could eat some kibbles (dry food) but later on, she only could eat the creamy treats. 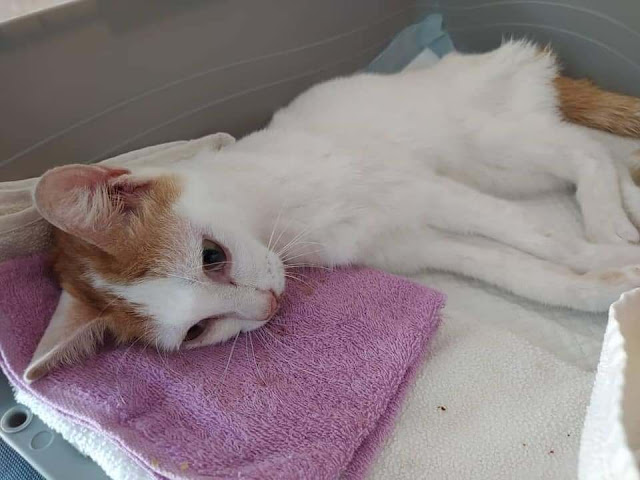 She had started showing signs of passing on and we knew it was extremely painful for her.
A week before she passed on, she had no more control of her bladder movement. So we had to keep changing her pet sheets. Any pressure on her lower body would make her pee too. She felt so fragile and I didn't dare to cuddle her during the last few days of her life. What we did was, we would put her at her favourite spot behind my laptop but made sure it wouldn't be too bright for her and stroked her often.
On Monday night, I sat by her side and told her that it's okay for her to move on. We're all ready and she can let go now. I sat by her bawling (as what I'm doing while typing this) and gave her a final goodnight kiss before going to sleep.
Hubby also said his last goodnight to her afterwards, telling her it's okay for her to let go.
As we sat beside her, she did looked like she wanted to meow something to us but it was too painful for her. Watching her experienced all those pain was indeed heart-wrenching.
Indeed, two months after being diagnosed with FIP, Putih left us on Tuesday morning. It was Son who alerted us that Tuesday morning.
It was hard to control my emotions as I kissed her one final time that morning. Her fur was so soft and while we know it's for the best, it was hard to finally let her go.
We buried her at a special place near to us and we would see her "grave site" everyday.
It was hard to lose a special family member (Putih was more than just a pet after all) but we also wanted to think of happier memories with her.
So let me share some here. 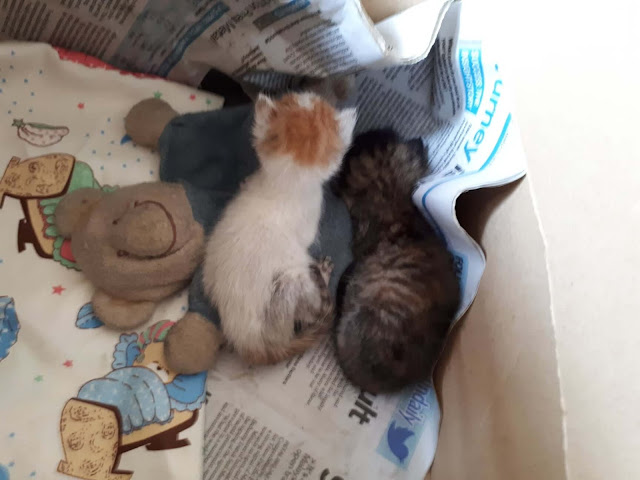 Putih and Kelabu, about a week old. We just rescued them the night before, from under our neighbour's car.
Hubby and I took emergency leave and sent them to the vet. We didn't know "who" was their mother and fed them ourselves.
We finally were able to reunite them with their mother but had to rescue them a few more times as their mom kept on running away from our home with them and hiding them in the "longkang". 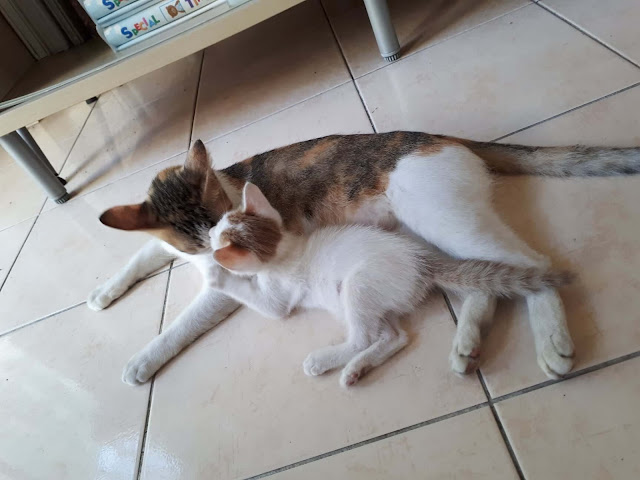 Mom and baby.
Putih was a month old at this time.
Mommy cat (she's a stray) didn't want to return home two months after giving birth so Putih and Kelabu stayed with us while Mommy cat lives outside (until now). 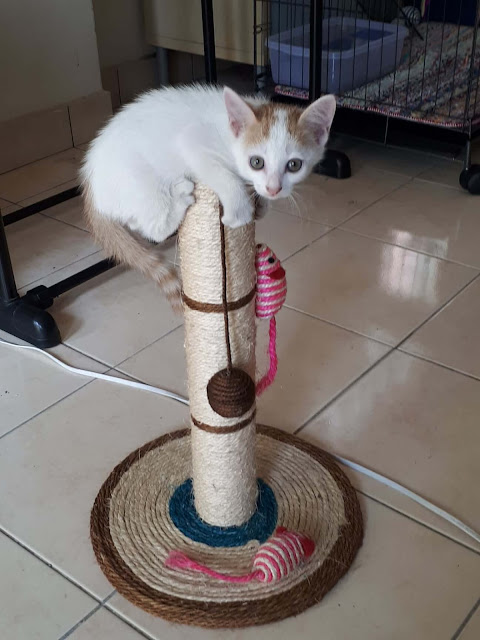 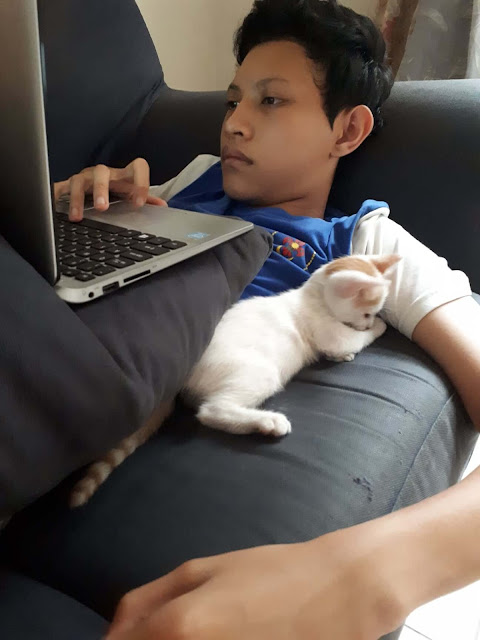 And very manja to boot! 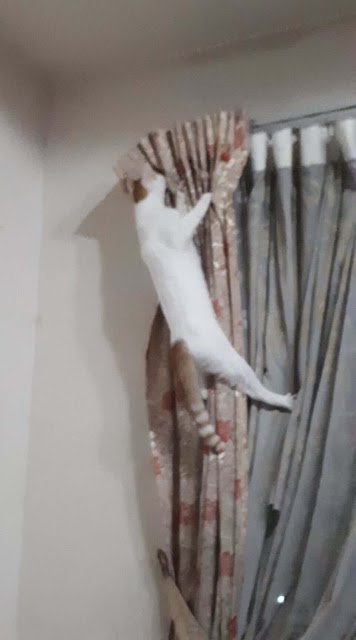 Such a little rascal too. We had to change our curtains because of her! 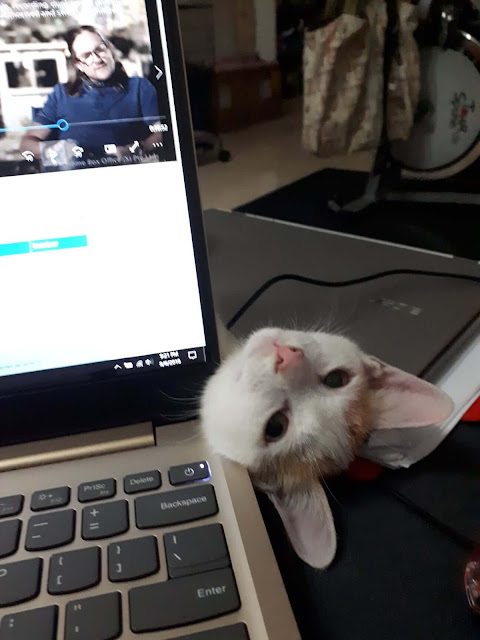 But how can you not love her? 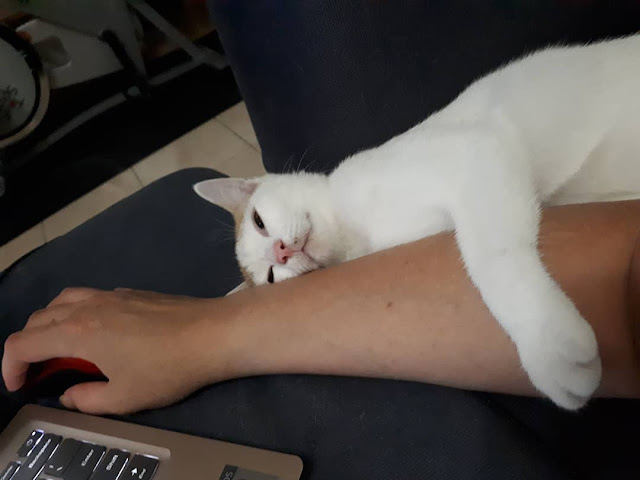 One of her favourite spots. 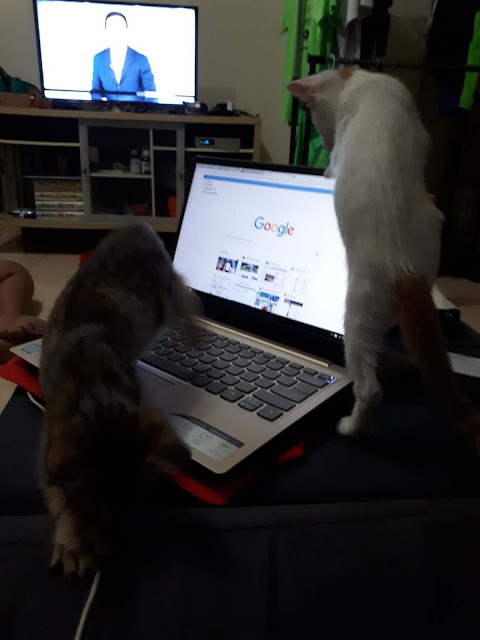 She also loved "helping" mommy when mommy tried to do some work.
Thank you Putih for all the lovely memories and everyone loves you. You've fought gallantly and lived well.
Email Post
Labels: Close to my heart Kittens