A Quiet Dinner, Welcome Drinks, Sahur And A Feast Of Mooncakes

all during our Wedding Anniversary weekend break at Equatorial Bangi-Putrajaya.
We decided against having dinner at one of the Hotel's restaurants and opted for room service. A good call, because the restaurants were packed with people. It was quite interesting to see three different crowds coming in for dinner that day. The Malay patrons for breaking fast at Cafe La Vista, then there was an Indian Christian wedding and the Chinese patrons going for buffett at Kampachi restaurant. 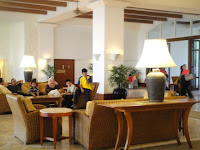 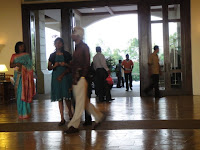 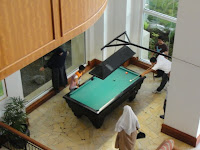 The lobby was a hive of activity, with patrons waiting to kill off time before entering the restaurant.

I came down to the lobby that evening after making a call for room service; while Zaini was monitoring Raimie taking his bath; because of this: A box of mooncakes. 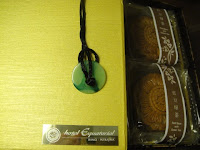 I had earlier made an inquiry to the Hotel about getting a box of mooncakes for Zaini as he loves mooncakes but was informed that Equatorial Bangi-Putrajaya doesn't carry the mooncakes that I wanted. Specifically mini green tea mooncakes. Imagine my surprise when at around 6.50pm, a Hotel staff came knocking at our room and presented us with a box of these lovely mooncakes.

So, I just had to go down and thank the General Manager personally for them. He got the mooncakes from a sister hotel in Kuala Lumpur. I was almost speechless by that gesture. (almost, but that didn't stop me from yakking away afterwards. Hard to keep my mouth shut once I start. LOL) I had a nice chat with him before going up to our room to get ready to break fast.

Again, thank you for all the kind gestures you've given to us. They are all greatly appreciated.


I got to our room just in time for the food to arrive. I tell you, this was the first time we had to get out our own food and set up the table ourselves after the cart was pushed into our room. 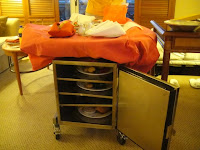 Can't blame the guy though. He was rushing to break fast too. What we had for dinner : 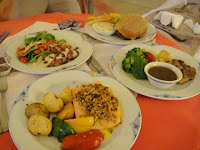 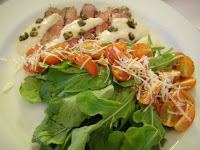 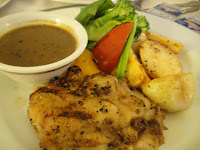 Oriental chicken for me 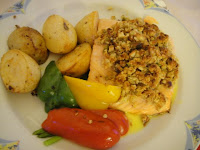 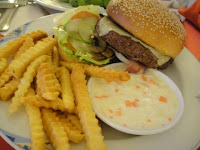 and a humongous BBQ burger for Raimie
not to mention the fruits from the fruit basket. We were stuffed!

And later that evening, we headed down to Tee Off Lounge to enjoy our complimentary welcome drinks, Citarasa. Had to wait until it was quite late to have our drinks because even at 9.00pm, the place was still teeming with patrons having a walk around the hotel after their dinner. Screaming kids included. 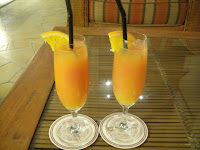 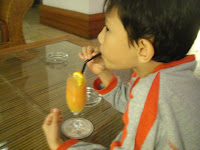 The next day, we got up early at 4.00 am to have our sahur at Cafe La Vista. Sahur (pre-dawn meal) is available for Muslim guests during the Ramadhan month from 3.30am to 5.30am. There were just a couple of staff around but we were quickly ushered to a table and I got my coffee in no time at all. Efficient service despite the early hours. 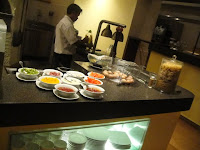 The choice of food that early in the morning was quite limited but ample enough. The omelette station was open but we passed on that. 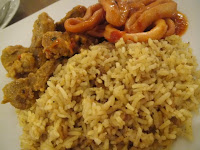 Zaini's choice of sahur. There were rice (plain and briyani) and four types of 'Lauk' - squid sambal, beef rendang, fried chicken and tenggiri masak lemak available that morning. We joked that this may be last night's leftovers. No offense! 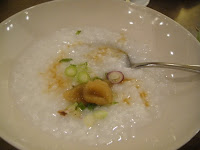 I had a simple congee. Actually, I would love to eat some croissant, but only this was available at the bread section. There were cakes available, but I don't really fancy eating cakes that early in the morning! 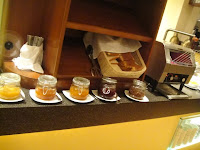 The staff, who had ushered us to our table was worried about me not eating during the sahur because all I seemed to be having was coffee and glasses and glasses of fruit juice. Shows that he was quite attentive despite being busy with other guests.

Zaini and I didn't sleep after sahur. Instead, we sat at the balcony watching the dark sky filled with flashes of lightning. I tried to take photos, but didn't manage to get any good photo of the lightning. 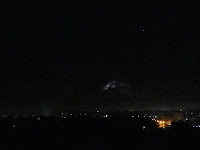 Email Post
Labels: Celebration and Holidays Checking-In Makan Time Out and About Vacation