A Day To Celebrate Excellence

Both Zaini and I are rather proud of our son. On Raimie's last day of school last year, we went to his primary school with him to attend his year-end prize giving ceremony, where he bagged second placing in his class. On Friday morning, there was another prize giving ceremony for Raimie to attend with us.
Both of us took a day off from work and Raimie was given a letter from his Islamic Primary School (known as SRA - Sekolah Rendah Agama) for exemption from attending class on Friday, Jan 22 to his Primary School (SK - Sekolah Kebangsaan). Raimie attends two schools Monday to Friday - the normal national primary school (SK) in the morning (7.45am - 1.05pm) and the religious school (SRA) in the afternoon from 2.30pm to 5.00pm and continue with his Iqra' class and reading the Muqaddam at the surau next door after that.
Early this year we were informed by his religious class teacher, Ustazah Rabiah; that Raimie had secured first place in his class for last year's exam but we thought there won't be any prize-giving ceremony at SRA. When we first received the letter from his SRA informing us about the ceremony that was to take place on Friday morning and Raimie needs to skip school for that, we were not really sure whether to allow Raimie to miss school that day but finally we decided that we should go.
When we sauntered in (we were late because Raimie had to answer nature's call. Haha) to the SRA compound, we were immediately greeted by his Ustazah saying that her important guest has arrived. It was then we got to know that Raimie not only will be getting a prize for 1st place for Year One, he also managed to bag the prize of Best Overall Student in the school. Now, that's quite an achievement, right?
Had to thank all his Ustazahs for their efforts in teaching their students. Unlike the sekolah kebangsaan that he attends in the morning, both Zaini and I were unable to help all that much in his SRA studies. Although I studied Arabic for a total of 5 years in primary school and secondary school; most of the knowledge had somehow seeped out of my brain. LOL So, if anything; Raimie's excellent showing in his studies was because of his Ustazahs. Thank you Ustazahs! 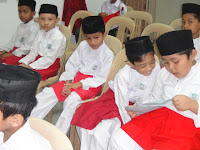 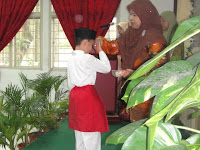 Receiving his prize for 1st place in Year One from his Headmistress, Ustazah Siti Raihan. A cheerful lady whom I first mistook as the admin staff at the school. ^-^! 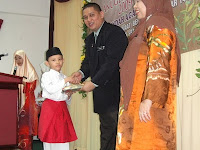 Raimie receiving his prize as best overall student from JAWI (Federal Territory Religious Department) representative.
After the ceremony, we were urged by the Ustazahs to take more photos of Raimie on the stage. They seemed really proud of him. Talking with one of the Ustazah, she told me that Raimie should work hard and hopefully go to a Islamic Secondary school (Sekolah Menengah Agama). Well, I leave that to Raimie. He still have five years to complete primary school!
We'll try and support Raimie attending SRA until Year 6 and hopefully excel in not only his UPSR  but also UPSRA. I know when he enter Year Three there will a bit of challenge in attending SRA as the classes will clash with his extra-curricular activities at SK but we will try and work it out.
Email Post
Labels: Close to my heart School