What that means is running within or faster than 2 hours 30 minutes for a 21km distance.


I realised what a folly that was this week. Maybe I can try a sub 2:30 at SCKLM 2013 but definitely not at Brooks Half Marathon which was littered with crazy inclines.

Anyhoo, totally feeling unfit this week. I only had one other run prior to Brooks Half Marathon and that was on Friday! Cycled a bit on the other days as I was resting my legs (shin splint strikes again! *sob sob*) but not really helping. *wuuuuwuuuuwuuu* 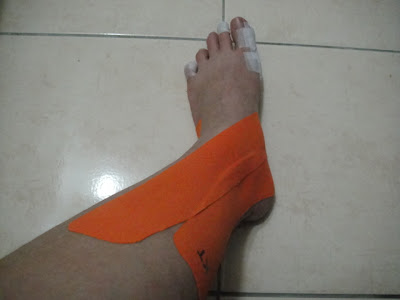 Prepping for the run. Tape, tape, tape everywhere. Somehow the KT Tape didn't hold up and one rolled down barely into KM10. 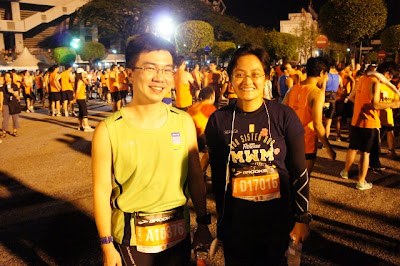 Saw Neoh just before flagged off. He asked my plan for the run, and I happily told him that I had none. I decided to ditch that sub2:30 plan and just do a whatever run. I didn't want to push it as I've been experiencing a rather tight chest these past two days. @.@ (Zaini said it's my excuse to do a slow run. Yes, he is totally right). 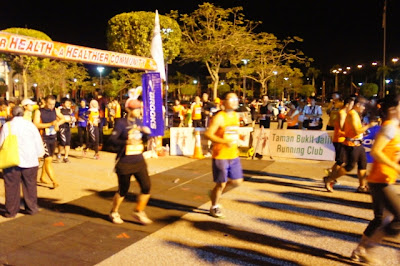 5 minutes after flag-off, and off I go. Took 5 minutes for the starting line to be clear. Absolutely a massive half marathon crowd today. So massive that for a straggler like me, it was hard to run on a clear path. So I was like, oh whatever... when I can't run and overtake people, I just walk (especially on inclines).

I didn't feel safe running this race either. Way too many honking and irate drivers abound. Man, Bukit Jalil people are sure one IMPATIENT lot. And at certain strecthes, they just zoom past us runners with nary a concern about running over somebody! @.@

OK, so some runners do seem not to care about their safety too, they way they ran outside the "coned" area. I mean, why on earth are you so impatient for? Want to podium, izit? Want to podium, don't run at my pace lah.... :(

Then there are those dark strecthes too. I am absolutely terrified running in dark places and the thought of accidentally stumbled on something and fall.

Cons aside, I must say I had fun today.

At around KM10.50, Bett said hi to me. Then lost her. Sorry, didn't managed to take photos with you, Bett!

Zaini was waiting for me at around KM12(?) and I almost didn't notice him taking photos there. 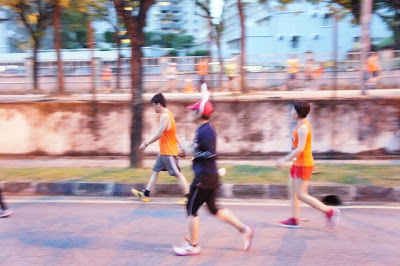 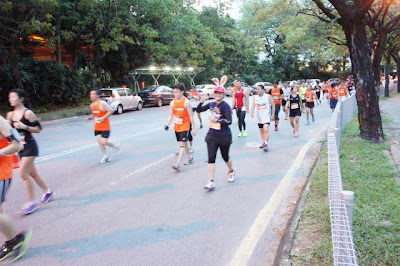 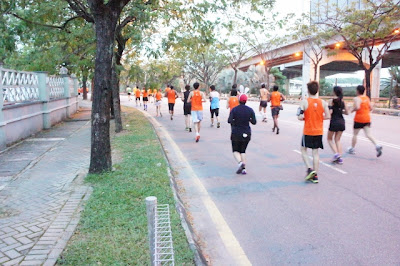 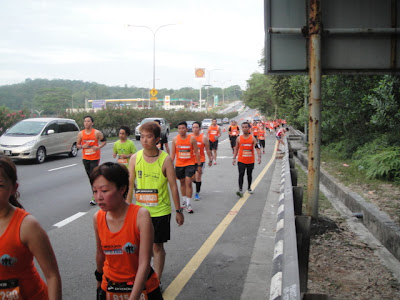 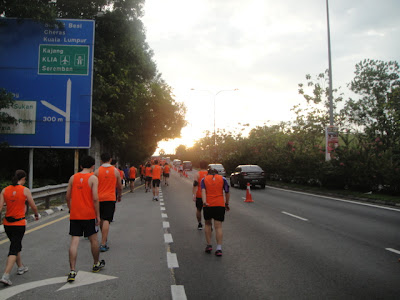 Some random inclines photos I took. Took quite a number of photos before the sun rises but they all suck. I cannot take photos when there is no sun la! huhuhu 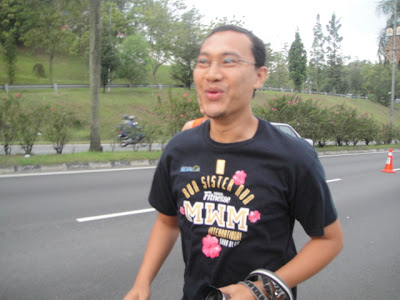 Saw this guy again with 6km to go. He paced me all to the finish line, taking lots of photos while running too plus be annoying by urging me to run faster. I DO NOT WANT TO! LOL


We probably annoyed a lot of runners as we took photos of each other! Bwahaha 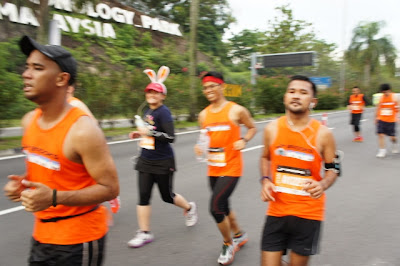 At around KM15, saw Rashid. Poor fella. He wasn't feeling well today. As a matter of fact, he threw up 4(!) times during the run. Had a bad case of food poisoning but he was still gamely running for a half-marathon. He told me he'll see the doctor after this. I hope you're feeling much better now, Rashid! 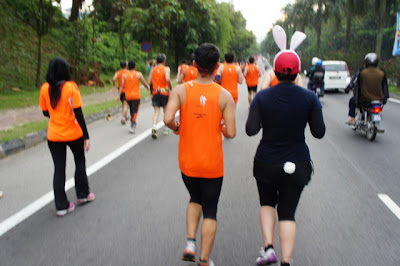 Still running together and pretty much at chit-chat pace. Yup, we chit-chatted. A LOT! 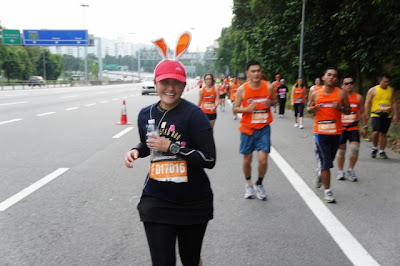 Also can take lots of photos too. ^^ 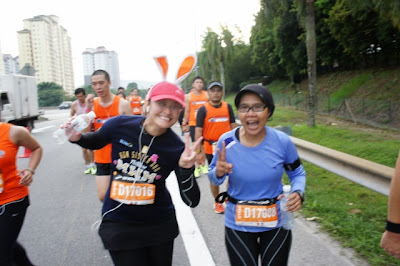 Saw KZ, a runner I got to know through Gaited Community and ran with her for a bit. She had a cramp and asked me to go ahead. Cramp also, she finished strong! SALUTE! 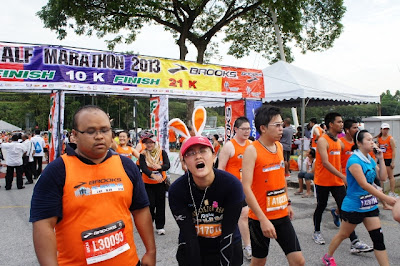 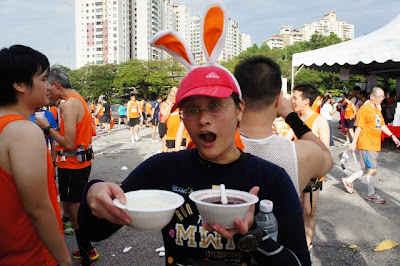 Happy getting food after the run. Got Massimo bread, got watermelons, got red bean porridge (bubur kacang merah la...), got taufoofa, got wheatgrass drink also. Kenyang, I tell you! Took a number of mineral water too. 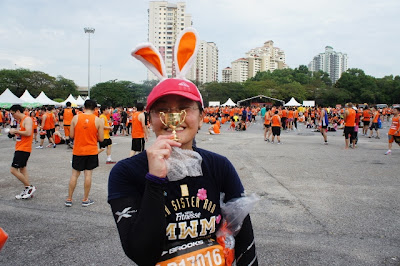 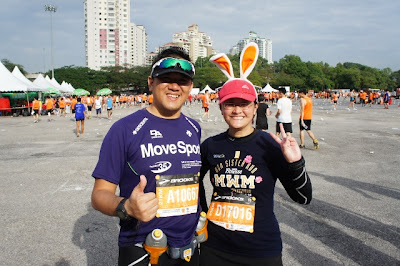 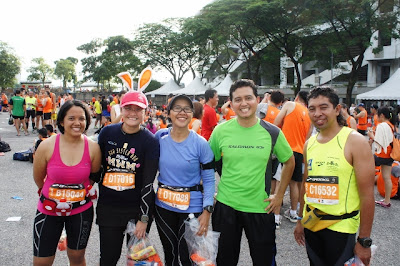 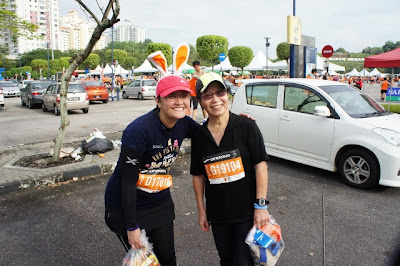 and I also got a photo with Auntie Teresa. You know, the 71year old lady marathoner that was featured in Astro ad? She just ran Standard Chartered Hong Kong Marathon last week.

The race organization, the route and the impatient drivers at the area may left a lot to be desired for but I have to say, I am happy running Brooks Half Marathon.

Now, more hill trainings to help me cope with inclines littered along a race course. I am such a wuss when it comes to hills. Next - Malaysia Women Marathon. Apr 7th!
Email Post
Labels: Itchy Feet Race Recap