I've been reading news with much worry about the passport shortage across Malaysia especially in the city areas due to the new biometric chip passport glitch by the company that handled its printing.

It's also worrying to read about friends who went to renew passports and had to queue a few times as number had ran out for the day because only a very limited numbers were allocated each day due to the shortage.

Hubby and I needed to renew our passport too but we decided not to join the panicky and long queue in July and we waited and bidded our time. There were news abound that a passport application process might take as long as six months and that probably contributed to the passport renewing and applying frenzy.

A friend went to Kuala Kubu branch a couple of weeks ago and got hers after about a 4-hour wait. She was quite worried about not getting hers done as she needed her passport urgently. Quite OK lah, I suppose and she didn't have to queue at 4am just to get her numbers.

I had an event to go to in Putrajaya, in the afternoon so Hubby and I decided we'd try and renew our passport while waiting for the event to start at 2.30pm. We thought, if there's a long queue, we go renew, pay and later collect the passports after the event. Or later later lah... 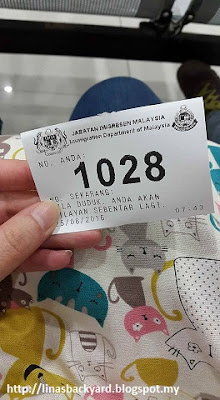 Our number was called about 25 minutes later and about 10 minutes later, made payment. Payment can be done with cash or cards (debit/credit/charge card). So convenient wei! And so fast also.

It's a one hour wait for passport collection so we decided to go eat breakfast first.

Came back one hour later, and just queued for our passports which were already waiting for us to collect. As a matter of fact, the fella in front of us held number 40.

When we left, numbers for passport renewal and application were still available and before 10am the officers there had served about 100 applicants. Talk about efficient!

Disclaimer:
I am not paid by any government bodies for this positive review.
Bad review you all viral. Good review, must also viral. Baru fair.
Email Post
Labels: Out and About Review