and my 24th one todate...
﻿
It was a happy run despite not finishing it within my target time.

It also marked the end of a 12-weeks training program by Andrew Kastor that I followed, which was published in Runner's World. Those who wants to try the training program can download it from this link.

From the start of the training program, I set a 2:25 target for SCKLM HM 2016. Not really confident I could achieve it, what with a 2:34 finish at Twincity Half Marathon (where I wanted to achieve a 2:30) but I figured no harm in setting a higher (but achievable) goal and do my best to follow it through during training and race day itself as I wanted to train progressively towards my BIG race in October this year.

I only entered a half-marathon race 9 weeks into the training program when the long run needed was a 21K. The rest of the weeks' long runs were done by myself and a couple of runs during Ramadan month with my Gaited Community buddies at Bukit Chenta.

The race in week 9 was the TM Fan Run where I ran with those in Gaited Community who wanted to do a sub2:30 HM finish and it was led by Bismi. Surprise, surprise - I finished in 2:22 which was faster than my 2:25 target for SCKLM!

I did another HM the week before SCKLM, at the Men's Health Women's Health Night Run but only managed to get a 2:32 finish.

With this two races to compare, I knew that getting a sub2:22 to match TM Fan Run timing would be hard but I thought I'd still give it a shot.

Managed to keep pace until 15K but was 3min slower than target at KM18 mark where the incline at Bank Negara and Padang Merbuk awaits. I guess more hill training is needed especially during the tired stage.

It was slower again as I approached Muzium Negara and the incline towards Dayabumi.

Although I couldn't keep pace for the final 6K, I was still pretty happy with my run.

Starting the run itself was pretty much uneventful as we checked-in Citin Hotel which is very near to the start line. I was pretty relaxed that I only got to Dataran Merdeka 7 minutes before flag-off and was still joking around with a couple of friends when another friend told me to hurry up and enter my pen for the flag-off. Hahaha

It took me about a few minutes to cross the finish line as the HM crowd was HUGE and after just a few metres of running, I realised that I had forgotten to bring along my Torrone sweets.

With no sugar source of my own (I like to suck on sweets while running), I knew I had to depend on my energy gel. I brought two along for the run, a Glukos energy gel which I bought from an FB friend and a Hammer gel which Hubby helped to buy at the SCKLM REPC.

Water stations (WS) were ample. Waaaaay too ample, as a matter of fact. The first one was located at KM4 and then it's 2K apart for the next WS until KM16.6 where the final one was 1.6K apart.

I probably could have survived not stopping at E.V.E.R.Y S.I.N.G.L.E W.S. but I did and wasting more time than I should. So kiasu wanna get all the drinks and so kiasi as if can die of thirst if miss one WS. Hehehe

Took my first gel at KM8 and the next one at KM16.6. There were also unnecessary stops at supporters "kedai runcit" for Coke probably set up for the FM runners... but since I passed that way also, I also kepoh-kepoh and enjoy some lah! Hahaha

Thank you Kura Runners for the refreshments! Not too sure whether the "kedai runcit" manned by some ladies and a little girl was also from Kura Runners but they were great too! 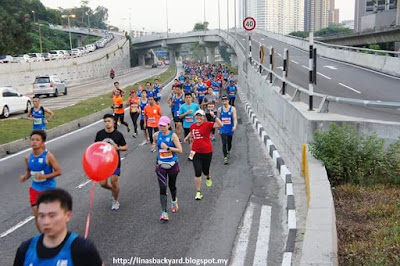 Me at KM15, happy to see hubby waiting there and cheer me up. 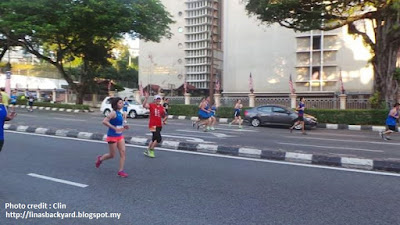 400m toward the finish line and with friends who came to cheer runners up and also runners who had finished lined up the streets. 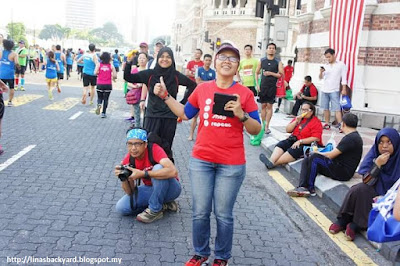 Awesome bunch of people who came to support and cheer for us runners.﻿ 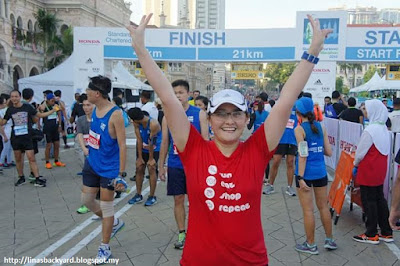 At the finish line. 2:28 Gun Time, 2:27 net time. Not too shabby but I still was off by two minutes of my target and 5 minutes off from TM Fan Run timing. 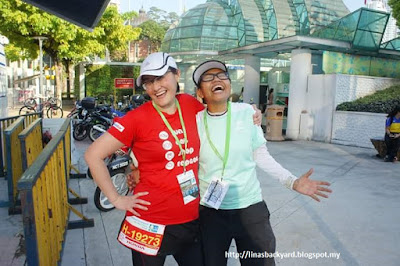 After the run, lingered a bit to take photos of friends, kacau "innocent" volunteers, sibuk here and there but didn't stay around for long.
Needed to get back to hotel, shower and all that. It's the "time of the month" so it was a tad uncomfortable to stay wet and sweaty. Huhuhu﻿ 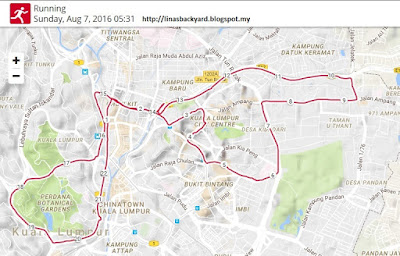 My 5K splits for the run. Need to improve on the 16K onwards pacing especially if the route has hills towards the end like SCKLM. 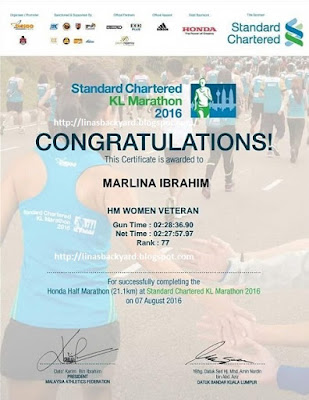 And my e-cert. Not too shabby, eh?

I'll take it easy for the next two weeks before starting on my 9-weeks training on Aug 22nd for the BIG day in October 2016.

And for the immediate action (well, immediately after being malas for two weeks); I need to shave off 2min off my HM timing first. Hopefully I can do it at Seremban Half Marathon.