My Second Half Marathon In August - CICM Responsible Care Run

I dunno what got into me when I registered for the CICM Responsible Care Run held on Aug 28th, 2016. I've done the run in 2012 when it was held in Setia Alam (race recap here) and registered for the 2013 edition  in Putrajaya (but I later DNS because it got postponed or venue changed).

Anyway, I registered to do a 21K back in June when I was looking at my training plan and saw that I needed to do 16K. Very pandai, upgrade the 16K to a 21K race. And at a super crazy hilly route some more. For training konon. Train with hills. Konon. Hahaha

The 21K field was small, what with several running events held on the same day not only in Klang Valley but around Malaysia.

As this was my first week back into training after a two weeks rest - post SCKLM; I thought I'd just go easy - 7.10min pace for the first 10K and 7.30min for the balance. Showed how ignorant I was about the route elevation.

Yup, I was totally clueless about this route other than what friends shared - that it's hilly.

Ya... this hilly. Macam mau mati lari, especially when one didn't exactly was running regularly since Aug 7th.

We were flagged off at 6.15am and the first 6K was out of Taman Botani area and into residential area. The first 600mtr and later at certain stretch was pitch black and only the lights of passing cars helped light up the road.

I think there was a water station (WS) at KM3.5 but the volunteers there were just standing quietly in the dark without moving or saying anything that most runners didn't stop there.

At KM6, we made our way back into Taman Botani and I entered and was running in front of the start line and they were flagging off the 10K runners.

The 10K runners immediately face crazy ass incline from the start and I was relieved when 21K runners were later directed to the left and the 10K runners towards another hill. Steep hill (that one with the highest spike in my graph).

From 3K onwards, I kinda followed this one lady as she was really consistent with her running and easily ran up all the inclines (I walked quite a few but somehow managed to catch up with her).

There were 3 u-turns, 1 at KM4 back to Taman Botani, another at KM11 (I think) and the last one at KM18 (both the latter ones with timing mat for checkpoints).

I brought along 2 Glukos energy gel with me and a bottle of N8 Endurance drink mix. I ate an energy gummy before the run because I couldn't find my favourite Torrone Barley Mint Sweets which was a bummer.

Dunno what happen, by KM4 I was feeling funny and slowed down a bit. A fella patted my back and told me to keep going. I just smiled and continued walking until I felt slightly better.

From then onwards, I ran while trying to stop myself from vomiting. Not sure whether it was the gummy but with a temperamental tummy, I decided to not take any energy gel throughout the run. I didn't even dare to drink the isotonic drinks provided at the water stations but I took sips of the mixed N8 Endurance drink that I carried in a mineral water bottle during the run. Yup, sips only and the drink somehow managed to carry me through the whole of 21.3K! 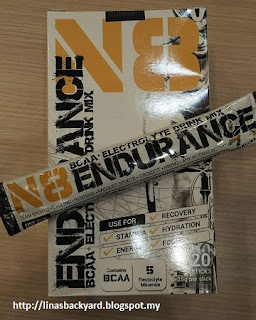 It was the first time I took the drink mix out during a race and I was glad I did!

We finally chatted with each other as I caught up and ran beside her at KM17 but she sped ahead afterwards. Later we ran together until KM19, talked about our races (it was her 3rd time running in Taman Botani - she had done 7K, 10K and this time the 21K at the park) while it was my first time.

With about 1.5K to go, I started to run again, pushing myself and thinking about the finish line as motivation. Looking at the other E (veteran) category runners who had u-turned after KM18; I thought I'd stand a chance at 5th placing (I count them one by one la...) 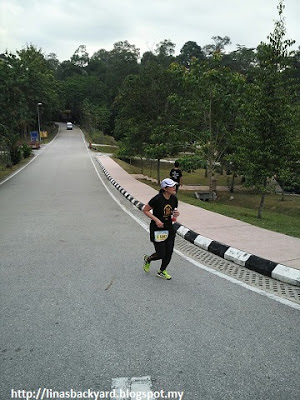 The final 300m and saw Hubby's annoyed face. He told me I can continue walking as I just missed the 5th placing spot. Demmit! I was like "How did I missed counting one runner".

But no, I run not for placing but because I want to run (occasionally have to walk because tired already...)

Friends who were on duty with the timing told me I just missed the 5th place spot and I was feeling quite down about it so I just crossed the Finish Line, got my finisher tee and medal and then went to lepak with them as they were checking the finishing runners about 150mtr from the finish line.

Hubby and Son meanwhile went elsewhere so I was free to chat with people. 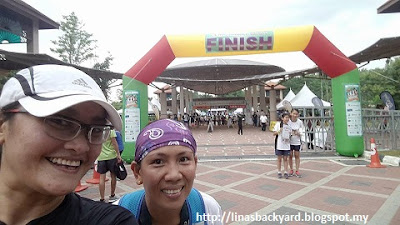 The lady from Kota Kinabalu whom I shadowed until KM19.

Congrats to us on finishing the run! :-)

I peeped at the manual results and saw that Women Open Category 5th placing still didn't finish yet and at that time, I was sorely wishing I had registered in the Open Category instead! Women Veteran kick ass!

So there I was feeling a bit glum when suddenly I heard my bib number and name was called from the stage. Wasn't sure what was happening but after hearing my name being called 3 times, I decided to run to the stage. Menang lucky draw kot. 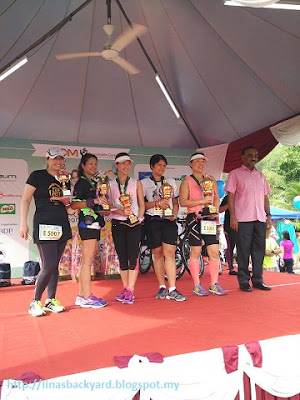 Turned out, I was the 5th place finisher! One of the top 5 had been DQed because she didn't run the complete loop. I was informed that she herself had informed the organiser about it. Respect! 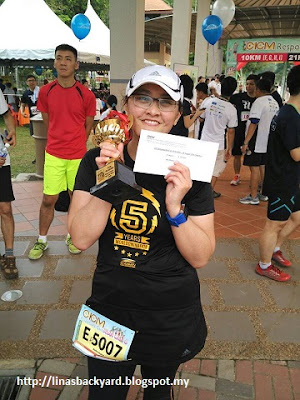 Yeay! Got trophy and cash prizes some more!

Lucky me lah. There weren't many running in my category today (there were even less in the Women Open) hahaha 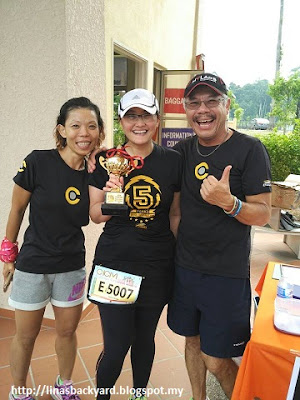 Great runners they are and equally great friend and supporter of anyone running. 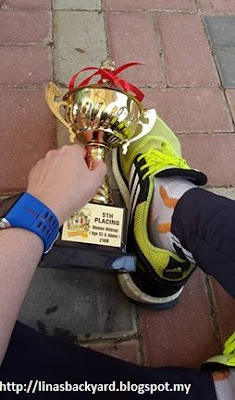 Just like Jog For Hope which I did on Aug 14th, another 5th place finish for me. 10K that time and 21K this time.

It was a happy ending this time. To think that I had seriously thought of DNSing the run due to a slight pain in my left ankle. Hubby too wasn't keen about me doing the run, what with the injury.

But I think I somewhat, somehow cure it by running today! Pain gone already! No more swelling too! Bwahaha

I finished another half marathon and will do another one next Sunday at Seremban Half Marathon. Hope I can do better (in terms of timing) in Seremban!
Email Post
Labels: Close to my heart Events Itchy Feet Out and About Race Recap Travel - Selangor