I had thought perhaps it'll be an easy session and just look-see look-see, happy run along the route (some of us did the 5K route and some did the 2.5K route) but everyone seemed to be speeding off that morning. Hahaha

Ariff, who was the RD for BDB Triple Challenge (which I did the route review in Langkawi for their BDB Climb & Run Langkawi in June); ran and chatted with me and another blogger Max of Runwitme fame as we started running.

Ariff sped off after the first incline at around 1K mark and I ran with Max until about the 2K mark. I then followed a group of 3 guys and kept following this one guy until we reached St. John school.

I decided to follow the guy as I wasn't familiar with the route and wanted someone as a guide. Truthfully, it was quite nice to have someone pacing too, albeit without their knowledge. Hahaha 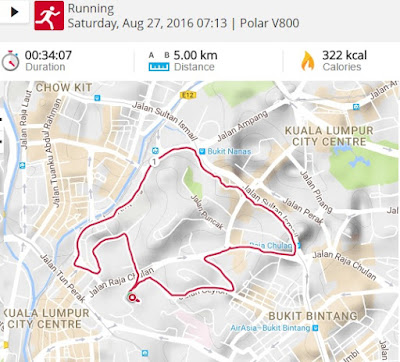 The route that we did for the 5K category.

Took it real easy for 2K and followed the guys' pace after that as I only wanted an easy, warm up run before Sunday's half-marathon.

The start will be fast as it a downhill but runners will face an incline a few hundred metres towards Jalan Ceylon after that. Another incline starts at Muzium Telekom up to St. John school at Bukit Nanas.

Traffic was a concern. Plus heat too. But I suppose the organiser will have provide a top safety measures for runners. For runners, we have to prepare ourselves for the 3pm heat lah...

After the run, everyone was treated with a generous spread of nasi lemak, kuih muih and a sinful, to die for, rugi if don't eat chocolate cake. I was happy I took a huge slice of it. Hahaha 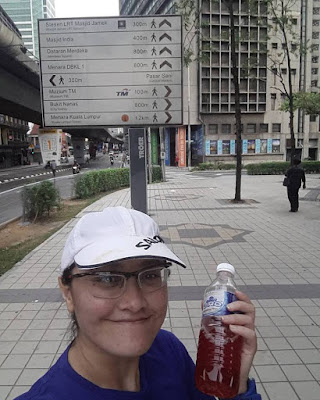 After the session, I decided to add a bit of extra mileage and head towards Padang Merbuk. There was a Merdeka Parade rehearsal at Dataran Merdeka so I stopped for a while there to see it.

All in all, a good session. Looking forward to the run on Thursday Sep 8th! A few of my friends will be running too. :)
Email Post
Labels: Close to my heart Events Itchy Feet Promo Review Travel - Kuala Lumpur