Lighting Up Shah Alam The Second Time With Ice Watch

Last Saturday, the family went down to Shah Alam to join the Ice Watch's Light Up The Night Run﻿ 2016.

It was the second year it was held at Plaza Shah Alam (which was the venue sponsor) but the running route was different from last year's edition in view of runners' safety and also crowd capacity.

We did the first edition with me & hubby running in the 10K category and this year, we did the 5K fun run with Son to celebrate his 14th birthday, courtesy of the race organiser; The Marathon Company and of course the Title sponsor, Ice Watch Malaysia. 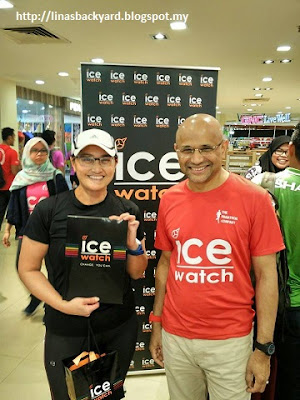 They had a media counter so I got myself registered first before going around the Plaza Shah Alam mall and to meet with fellow runners and friends before the flag-off. The mall sure was a hive of activities with most of their F&B outlets filled with runners having dinner. The F&B outlets had an extended opening night during the run to accommodate runners and were open till midnight! And yes, plenty of runners were still having their late dinner or supper when we left after the run (about 11.00pm).

The 10K flag-off was delayed while the organiser waited for PDRM to give a go-ahead and confirmation of road closure.

There was a huge crowd of 10K runners and equally big (or bigger) number of 5K runners with both categories having almost 6K participants. It took quite some time to see the 10K crowd moving away from the start line but everyone were off soon after that.

5K runners were flagged off a few minutes after the 10K runners and for us, we just took it easy.

It was really good to note that there was a total road closure for the first 2K of our route. Runners (and walkers) filled up the road and also the pavement.
After 2K, 5K runners turned left towards Bukit Bandaraya and this is where we started merging with the neighbourhood traffic.

We also started seeing the fast (and eventual podium 10K runners) runners running on the other side of the road, together with 5K runners who had by that time done about 3.5K.

The opposite side of the road (it was still full road closure at that time) was also filled with 5K runners and I saw fast 10K runners struggling to find space to run ahead because 5K runners weren't giving way. Lead runners of course had the assistance of lead bike marshall to help clear the way.

And it was at the first junction; where we start seeing runners coming down from Bukit Bandaraya that I saw 5K runners just making shortcuts to finish their run. OK lah, it's just a fun run, you say. Why need be so serious. Short cut a bit only. Right?

But it's this kind of attitude lah later will bring you to think it's OK to shortcut a 10K, 21K and even a full marathon! Yes, I know people who bragged about "finishing" a full marathon when they didn't actually finish the whole damn 42.195K! It start with ala... fun fun only...

Saw a water station on the left side of the road (where the cars were passing through) at KM3 while we were told to keep to the right. So runners who wanted to drink, had to dart through traffic, drink, and cross the road again. I decided to skip the water station.

After 40 minutes of the run (or walk), a police car pass through to signal to partial opening to the road to traffic. Thankfully, Shah Alam drivers were nice lah.

The organiser had placed road marshals at all junctions along the (5K) route and I have to say most did an awesome job. While there were no cones placed along the route (it was full closure earlier, remember) marshall stood along the route to man both runner and vehicle traffic.

Alas, some of us runners do have the tendency to not listen to marshal.

Shah Alam, being a residential area sees plenty of junctions going into housing area. It is ridiculous to stop any vehicle from entering to exiting from their own home for 2-hours. I noticed the race marshals tried their very best to take care of runners' safety and also be considerate of residents. But when marshal stopped runners (for less than 30sec, I timed); it's for the good of runner to not just dash ahead and get banged by cars. It's even more ridiculous to see walkers refusing to stop and give way to ONE car!

With about 200m to go, we saw pacers with their pacer balloons still hanging over them encouraging runners and directing them properly to either the 10K or 5K finishing lane. It was really a nice gesture by the pacers to encourage runners and one runner remarked "I feel like a celebrity".

So good job Ice Watch Light Up The Night Run pacers for the extra effort done after they themselves finish their part. I believe they were from Kyserun group.

6K runners means quite a packed finishing area when we were there to collect our medals but the lines were fast moving. We were later directed to cross the mall for our finisher treats. That was a bit of a headache with everyone cramming back into the mall to get to the other side. Directing us to go around or "tawaf" the mall would be a better choice,

There were an abundance of goodies served for us and it was free flow! Yeay!

Bread, ice cream, water... and most going for seconds (and thirds and fourths. Hahaha)

It was a fun run, as we didn't took it seriously, We were out to enjoy the night and we did.

But I guess for more serious runners, navigating through the 5K runners to finish their 10K could be somewhat annoying. I tied to help by occasionally yelling "runners coming through" when I noticed 10K runners approaching from behind but most just got startled by my shouting and never bother to give way. Hahaha

The route was good.  But I did only 5K la... 5K route was good except for the part where a lot of runners just to cut short their run and finish faster for their medals....

The race director announced after the race that they may provide timing chips for the run in future editions. For me personally, 10K with timing chips is good. 5K, no need lah. Kan?

For Son, he not only got a good workout, he also received another ice watch this year. 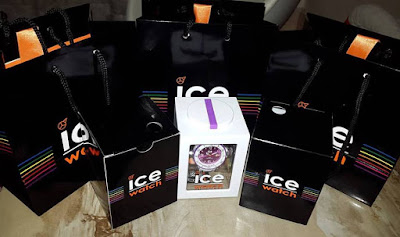 Ice Watch Light Up The Night Run is special as for both editions, a few lucky runners (make that 2,000 runners this year) received free Ice Watches from lucky draw. And runners were also able to buy RM699 watches at a promotion price of just RM99! 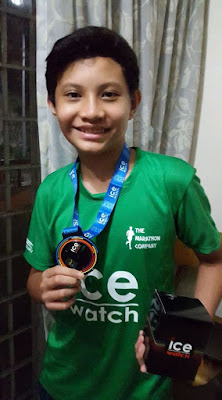