Nowadays, runners are spoilt for choice when it comes to joining and running in races, be it road races or trail events. This weekend was no different.

There were plenty of events to choose from; from cash rich, state sponsored events to events tied to brand names, to smaller scale events with less sponsors and hype.

For myself, I chose one half marathon that was organised by Cyberjaya Recreation and Cycling Club with Persatuan Sukan, Kebajikan dan Kebudayaan Jabatan Bomba dan Penyelamat Negeri Selangor (PERSKEB ) and 10senses Sdn Bhd called the Firefighters Cyberjaya Night Half Marathon (FFCNHM). A no-frills event but rather well executed, nevertheless. Not perfect as some improvements can be made but perfectly OK to me.

This was their third edition; the first one was held in 2014 and the second one in 2015. I had joined the inaugural edition but had to give the 2015 one a miss as the family was on a vacation elsewhere, and I ran in an ultramarathon instead. heh heh

While I had registered early for the race and marked my calendar, training for the half marathon had been erratic. I had kinda stopped training during the first week of September when Hubby was hospitalised and hadn't been doing much after that, other than running in a couple of 10K races the week before this half marathon.

With such terrible training, even a sub3-hour finish would be fine for me. So sad, right? huhuhu 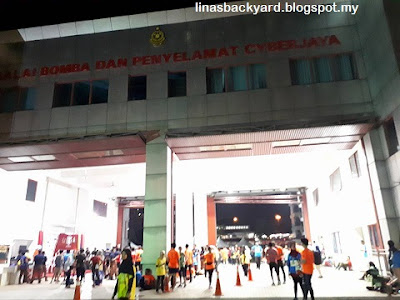 The race venue was the Balai Bomba Cyberjaya itself and apart from the race, there were firefighters exhibition and booth selling items too.

There was quite a respectable number of runners in the half marathon category of about 1,000 despite so many events being held during the weekend. About 500 10K runners too (gleaned from the results list) and the rest were 5K runners. I heard there was about 2,200 runners in total, in all categories.

But some runners not only joined this Firefighters Cyberjaya Night Half Marathon, they also run in
other races - either on Saturday morning or Sunday morning.

I find the route good and provided us runners enough challenge without being too difficult. And thank goodness there weren't such busy traffic in Cyberjaya.

A night run (actually morning run too) in Cyberjaya is nice, just for that reason.

The organiser had placed traffic cones along the route (about 80% of the route) so that was great. However, I guess because the lack of traffic anticipated by the organiser, some junctions were left unmanned and both runners and vehicles had to pandai-pandai jaga diri.

Thank goodness most drivers in Cyberjaya are patient!

The route was well-lit and where there were dark stretches, the organiser had placed mobile lighting from their pick-up trucks and bomba trucks. 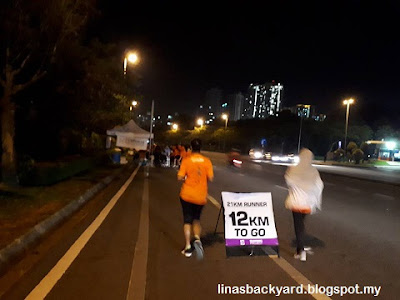 Route markers clearly showed the route of each different categories to follow and distance markers were in countdown format.

Crews and volunteers too helped by ensuring the 21K and 10K runners followed their respective route.

The most mental part of the run was after Shaftbury Square, from about KM14 until KM16.5 or so. We could see runners who had already made their u-turn on the opposite side of the road but as we run, it was just straight ahead with no sign of u-turn. So faaaarrrrrrrrr.... No u-turn yet! Hahaha

It was a great relief when we finally made our u-turn at the junction near Seri Puteri school and with only about 4K left to go. 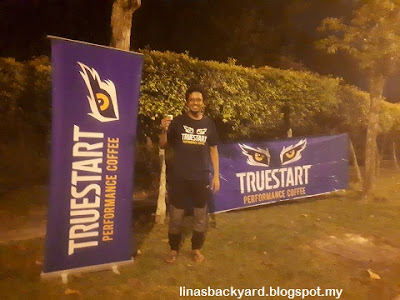 Water stations (WS) were placed at about 3K apart so that was good.

Apart from water and isotonic (100-plus which unfortunately I can't drink), N8 Sports Nutrition had a WS at KM9 and luckily, I can drink N8.

There were bananas at KM12 if I'm not mistaken and the bike marshall actually was helpful enough to carry some bananas and offered them to runners further up that particular WS.

I had pretty much just drank water and depended on sucking barley mint sweets and the N8 drink, skipping even the banana.

But I just had to stop for coffee which was served by TrueStart Performance coffee at KM17 WS.

They had both hot and iced coffee. It was heaven! And it gave me the needed boost to complete my run.

The last 3K or so was an incline so yeah, we runners faced hilly section as we were running to finish our half marathon. Suffer. Hahaha

Luckily for me, I had told Hubby earlier that I'm just looking for a slow 3-hour run so I spared myself from suffering or bonking. I certainly wasn't looking to push too much, with my lack of training and all and also for the fact that I didn't want to have a longer recovery time next week. 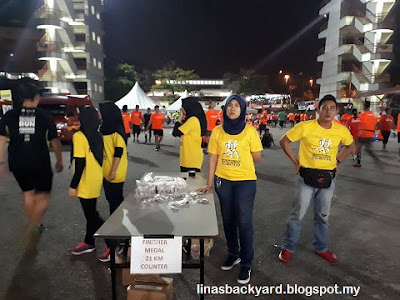 But still happy lor, can finish in less than 3-hour after all. Hihihi

Finish line organisation was good. Plenty of crews and volunteers to help show us runners the way to collect our medals and finisher tees and that help ease any congestion that might happen in front of the finish line. 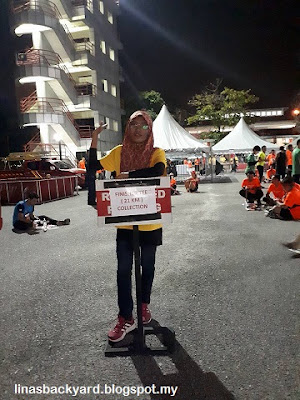 Got my medal then off I was shown the way to the tent where the finisher tees were located and also where we could get ice cream Malaysia, carrot soup and bread too.

The finisher tents for 21K runners were separated from the 10K and 5K runners and that is great! That meant, us slow 21K finishers were still able to enjoy food when we finished.

I love the carrot soup served (sponsored by Cyberview Lodge) for 21K runners. Nice to have a hot meal after a run. Old dy, tummy must have something warm. Hahaha

I also managed to taste the carrot soup served for 10K & 5K runners (got leftovers lah) which was sponsored by IOI Putrajaya. Sedap also. 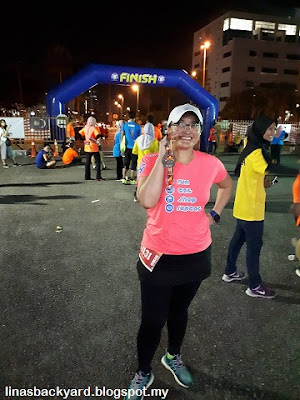 All in all, a good run for me.

So sayang my timing is so bad but that's what one gets when one didn't exactly train for it.

So lesson learnt and must commit to training after this! 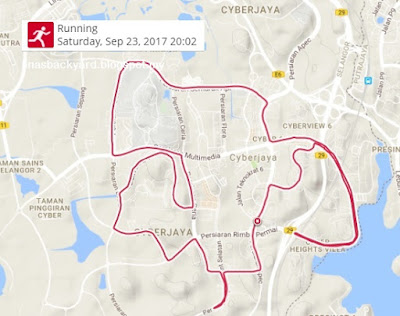 I like the route and it's somewhat similar to Twincity Half Marathon route (of course la... same area).

As I mentioned earlier, if there were more road marshalls (other than placing the traffic cones - but this was good too. Pity only, some of us runners don't really know to run inside the coned area and kept going outside of it), it would've been better but still, good job by the organiser.

I hope to join the event again, next year! I'll do better next time. Promise. Hehehe

Some photos taken during the event can be found at  Cik Arnab & En Kura-Kura page. Please go see and follow us! ^^
Results is available too, so head over this link.
Email Post
Labels: Events Itchy Feet Race Recap