Running In Malaysia's Own Airport Marathon

The marathon was part of Malaysia Airport’s 25th Anniversary celebration so I figured it’s just nice to run in the 25K category and avoid needless suffering of doing 42K. Wakaka 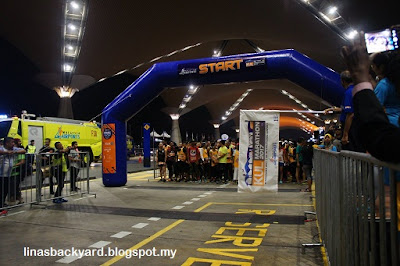 I had planned to do at least 3 runs the week leading to KUL Marathon as training but things happened and I didn’t run at all until that Sunday itself. Admittedly, the big part of not putting any run at all that week was due to laziness and not trying hard enough. In short – malas. Hahaha

Anyways, the excuses were, I wanted my blister that formed during MKH 12-hour to recover first. Then I had a few deadlines to meet and I decided to give those priority over my run. Then I reached home late. Then, it rained at night. Then, overslept on Saturday morning and I didn’t want to run when it’s hot outside dy. You know, all kind of excuses. Hahaha

The family decided to check-in to a hotel near KLIA, in Bandar Baru Salak Tinggi on Saturday as we also needed to collect my race kit (REPC) at KLIA before race day. I figured, might as well turn it into a trip instead of traveling back and forth on Saturday for the race kit collection and then for the race day itself on Sunday.

On Sunday, we parked our car at the Long Term Car Park (LTCP). Malaysia Airport had allowed free parking there for KUL Marathon’s participants. We then boarded the free shuttle bus to the Departure Hall at KLIA.

It was really interesting to experience flag-off at the Departure area itself and we were flagged-off in front of Gate 8 of the Main Terminal Building. There were even announcements made in the building itself (ala announcement for departure/arrival) for the KUL Marathon participants. Nice touch.

Another nice thing about flag-off from the Main Terminal Building was that clean toilet (with running water) wasn’t an issue. Me likey!

I was still recovering from my cough and flu and 15 minutes before flag-off, I had to dash to the toilet to vomit. Bluerk. Good thing I brought along some bread so I ate one after vomiting my breakfast that I had earlier, at the hotel. Huhu

I had wondered whether I should really start the run or DNS (do not start) but decided I might as well just run a bit and see how things go. After all, woke up so early already for the run. Waste money also for a hotel stay. Hehe

I dunno whether I heard wrong but I kept hearing the lady emcee announcing there’d be 4 (FOUR!) water stations along the route. Die. That meant what, one every 6K or so? Then it was warm up time which unfortunately for me was a yawn. I mean, we don’t need Zumba lah, for warm up but at least make it interesting and loud and clear…

Although it was still dark, I like seeing the control tower as our view during the first km or so. As I haven’t been training and I didn’t know how my legs would behave after doing MKH 12-hour the week before so I ran at a very, very prudent pace and effort.

Despite that, I felt a niggle around my left ankle (I wanted to tape it earlier but forgot) and it wasn’t comfortable. As we reached the LTCP area at around 2km, I really wished I could just dash over to the car park and wait for Hubby there instead of continuing my run. But then I figured, if I stop, I wouldn’t have anything to write or review about the race, right? And when one was generously given a slot by Ten Senses, who was the technical team for KUL Marathon, there’s a certain obligation to run in it. Hur hur

The water stations (which I mentioned earlier as announced by the lady emcee as 4 throughout the route – Hubby opined she must have announced the water stations for 10K. Ya ya ya) turned out to be placed at every 2.5km! Very very generous. But 25K runners didn’t have it as nice as the FM runners lah. They got apples la, teh ais la, bread la… Jeles.

For 25K category runners, we only came across one Petronas station along the route and that was after our u-turn at KM14. Some runners had done their Subuh solat at makeshift areas (cardboards were put aside for us) before reaching KM14 but some dashed toward the Petronas station to do it (or their toilet stop). There was a prayer tent just up ahead from the Petronas station with sejadah and telekung provided.

Anyhoo, I was still unsure whether I could finish the damn 25K at first, despite already running in it. But after 5K, it was like – a point of no return. Mana mau stop? We were in the middle of nowhere dy. And with no traffic coming on our side of the road other than medic and marshall. Sure cannot call Hubby to pick me up.

So I plodded on very slowly and being very mindful as not to tire myself out early. A friend from GC passed me at some point and it was hard to miss him as he was wearing GC’s bright pink t-shirt.

Lucky for me, the route was really kind for those who didn’t train because it was rather flat with just a few bumps here and there to make it a bit “interesting”. I probably could’ve just run up all the incline but I didn’t. Malaslah Hahaha

I chose to walk up the inclines but not too much because whenever I walked for too long, I’d start my coughing fit. To avoid that, no choice lor. Run lor. Slow also never mind lor.

But after the u-turn and 14km of running, I looked at my watch and I had done it in 2-hours. Damn slow. But I consoled myself with the fact that I was still running (with a bit of walking) rather steadily up to that point.

It was after KM17.5 water station that I decided that I didn’t feel all that bad and maybe I should stop goofing off and start running faster and aimed to reach 21K in 3-hours because that’s the cut-off for my next half marathon in December. A belated target, late in the run. Later, after reaching 21K, I made another target. To reach 25K below 3hour 35 minutes. Baru nak lari betul-betul. Haha

A number of runners had by now reduced to walking or some with spurts of running and walking but I decided to up my pace and only stopped when I approached water stations.

Before the u-turn at KM14, we were running with virtually no traffic (except when we head out from the airport terminal area and roundabout lah) but traffic was busier (and fast!) after KM14. Dashing to cross the road to get to Petronas Station was scary.

It was good that traffic cones were placed throughout the route but speeding cars that passed so near beside our lane was kinda scary. Equally scary was to see runners running so near to the outer side of the closed-off lane and seemingly quite unperturbed at speeding cars just inches away from them.

We were served cold mineral water and 100-plus at all the water stations but the last two water stations ran out of paper cups when I got there. Some runners (including me) resorted to picking up paper cups from the trash, washed them and re-used them again. We did that instead of chugging mineral water out of the 1.5ltr bottle. I wasn’t annoyed over this because it’s rather understandable experience for slower runners like me but what got me annoyed was to see the timing mat fella at the last CP puffing away without nary a care. Can someone please have an SOP that ban crew members and volunteers from smoking during an event? In front of runners?

It was here that I saw a long traffic jam as we ran towards the finish line. No honking at the runners but I heard some irate drivers asking volunteers about the jam. I hope nobody cursed the volunteers that day.

Malaysia Airport, in my opinion, need to blast more information about the marathon prior to the race day and that needs include any road closure that might affect other airport users. The info we get through the Malaysia Airport Facebook page was sparse and we only see more a few days prior to the event. 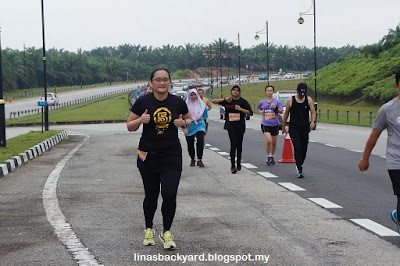 Back to the race, with just a few hundred metres from the Finish Line, I saw Hubby making his way back to the Finish Line because it had started drizzling. But lucky for me, he turned around and saw me approaching and dashed back to take my photos. Hehe

Then it was a dash towards the Finish Line, jostling with other 10K runners. One actually elbowed me. Haih. 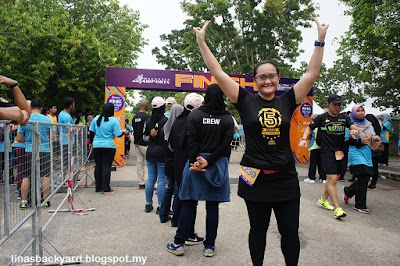 After crossing the Finish Line, the volunteers asked 25K runners to collect their medals and finisher tees at the tent farther up as the ones given out at the Finish Line were for 10K runners.

I took one bottle of mineral water and two bananas and head out to the Finisher Items tent. Hubby helped to queue for some bihun goreng for me while I queued for Teh Ais. Alas, the teh ais ran out while I was still queueing. Despite telling Hubby I didn’t want to eat, I managed to wallop the bihun goreng clean. Lapar juga rupanya. ^^ 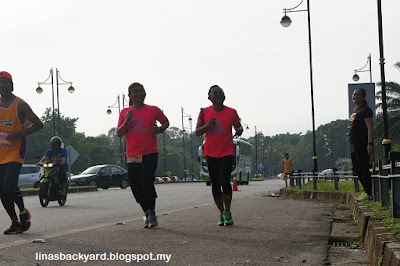 We stayed behind and cheered for marathoners for a bit before making our way back to our hotel.

All in all, it was a nice run for me. It was a pleasant surprise for me to discover that despite not running (and not working out at all) for a week, I still managed to run – albeit at a much slower pace; rather comfortably and still felt good at KM25. I kinda felt that I could still run more (and maybe do 42K heh heh).

And that’s probably how I should feel anyway for a non-target race. Unlike after Newton 30K or UM24 where I was ready to declare I’d stop running long distance after finishing them. LOL

KUL Marathon made me yearn for more and I guess that’s good as I do need to prepare for my December races. Jangan malas training! Hahaha

Kudos to Malaysia Airport for their inaugural marathon. Of course there are pros and cons in the event – just as I had written above but overall, it was a good event. I had a fleeting thought to suggest a midnight marathon but then, if they do it, we won’t be able to see much airplanes (because it’s dark) and I couldn’t take much photos too. Haha

I hope the next edition won’t be about numbers game but rather aiming for a quality marathon event. And I will be back to run with the airplanes again.

Congrats to everyone who finished their run yesterday, regardless the distance.

And thank you to Malaysia Airport, the technical team, crews, medic, traffic police, Malaysia Airport staff and volunteers for a great run experience for me (drama and all).

p.s SCKLM will be celebrating its 10th anniversary next year, so I totally should run 10K in SCKLM 2018 to celebrate its anniversary, right?

Some photos taken during the KUL Marathon 2017 can be viewed at Cik Arnab & En Kura-Kura Facebook page.