I never really got around writing about our Nikko trip, did I?

We decided to head to Nikko for our Dec 2017 trip  and unlike our Osaka trip in September the same year, Son tagged along this time. It was after all, his birthday treat trip.

We did Koyasan in September and I hiked alone at Minoh park during that trip but this time around, the family hiked along Lake Yunoko and Lake Chuzenji and enjoyed the view of Senjogahara Marshland and the three big waterfalls - Yudaki, Ryuzu and Kegon. 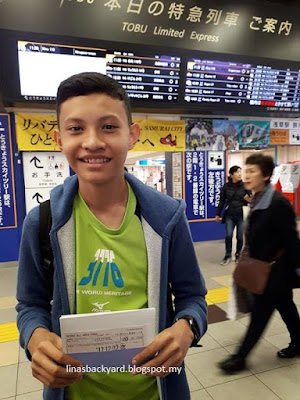 We got ourselves the Nikko All Area Pass for our trip to Nikko from Asakusa.

We bought the Nikko All Area Pass at Tobu Asakusa Station for 4,520yen per adult and the pass was valid for 4 days with the following condition:
With the pass, we could choose to ride Limited Express Spacia and Reverty, after paying a surcharge of 1,080 yen on top of the 4,520 yen for it but we decided to opt out from it. We weren't that much in a hurry and 1,000 yen is actually a lot of money if times three. And we wanted to just take it easy and enjoy the scenery and train ride.

We do need to make a few transfers along the way but it was easy as it was just a matter of getting off one train, walked across the platform and get in another train. Of course, with Limited Express Spacia, you can be spared of such "hassle".

The trip on local line was of course longer than using the limited express train and we bought bento at Matsuya for our lunch during the journey. 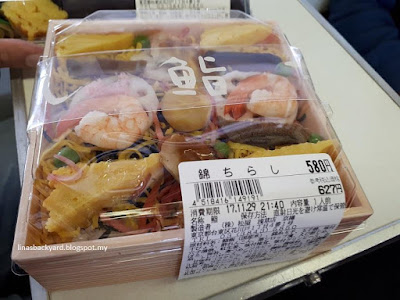 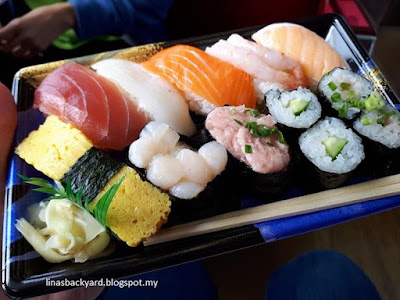 
Simple, supermarket bought sushi but these were way nicer than any sushi served in restaurants here in Malaysia. I'm serious. 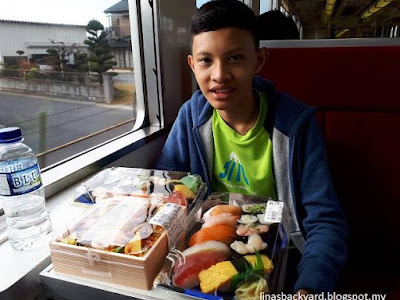 It's not ekiben but we enjoyed supa-bought bento in the train too! 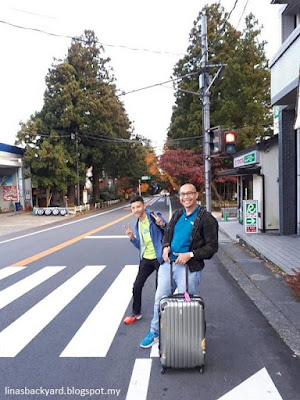 We arrived at Tobu Nikko Station a few hours later, and although our trip was made in December 2017, some autumn foliage could still be seen,

Not in their full splendour as we got there late but it was still nice to see nonetheless.
Our journey was not yet over because we still need to take more than an hour long bus ride to Yumoto Onsen, where we spent two nights in a Japanese inn there.

Yumoto Onsen is sulfurous spring resort that has the history of almost 1,200 years. You can see the source of the hot water springing out at Gensen-Goya (source hut), in the Yunotaira marshland at the outskirts of the spa resort area. I'll blog about it someday.

The area is also quite popular with skiers during ski season. 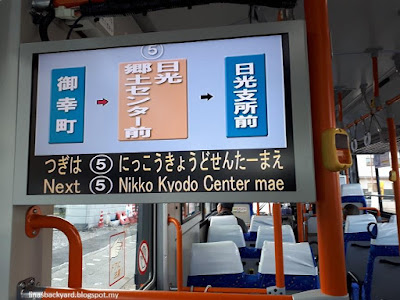 We boarded the bus and the fares was included in the Nikko All Area Pass.

Yup, because it plies the tourists route, there were multi-language signs in the bus. Not to worry.

As Yumoto Onsen where we stayed for two nights is located right at the end of the bus route, we managed to pass by major sight-seeing sites as we made our way to our hotel.

And the trip was made interesting because the bus driver was friendly and obliging in informing the passengers seated behind me by telling them nice spots and stories of the area we passed.

And we just listened in and enjoyed the ride quite a lot despite it going through the crazy zig-zagging road up the mountain called the Iro-hazaka.

The Iro-hazaka connects Nikko to Lake Chuzenji and it has 48 curved slopes. This road would be spectacular to ply through at the height of autumn season (not to mention the traffic jam too). 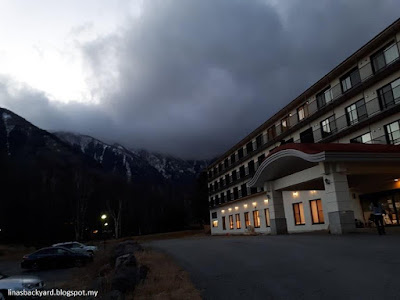 Finally we made it to our hotel and it was already dark although it was just 5pm.

With the strong wind and temperature that suddenly dipped to 2 degrees, the hotel looked imposing. 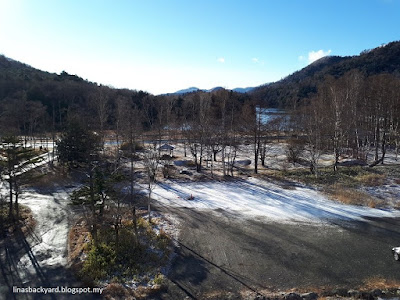 But the view from our room the next morning was awesome.

We had a view of Lake Yunoko where we'll be hiking along it later that day.

Check in was easy.

Although we were asked whether we could understand Japanese, the front desk staff spoke a mixture of Japanese and English with us.

We were informed about the onsen facilities available and its operating hours and also about dining hours. 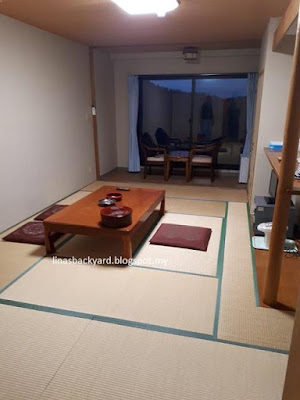 The room, with breakfast and dinner for three cost us about 18,000 yen per night which was quite a bargain for us. 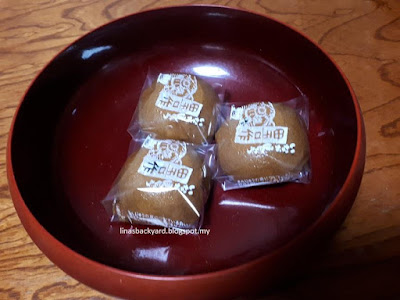 As customary, snacks in the room. 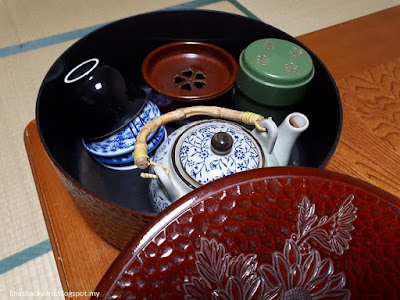 And of course tea and its utensils. 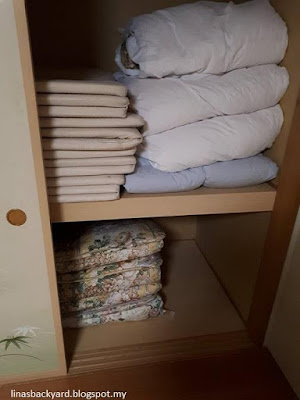 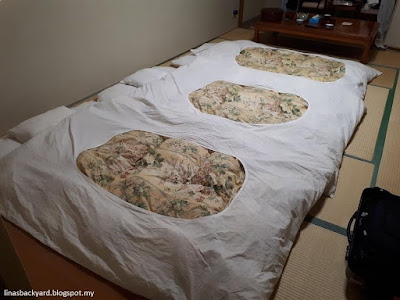 While waiting for dinner, we went for a soak in the onsen which was located at the ground floor of the hotel (both indoor and outdoor). Later we had our dinner at the dining hall. Time for breakfast and dinner are fixed and an announcement will be made when meals are ready to be served.

After dinner, we returned to our room and saw our futon (bedding) were all laid out for us and all we had to do was lie down and relax. 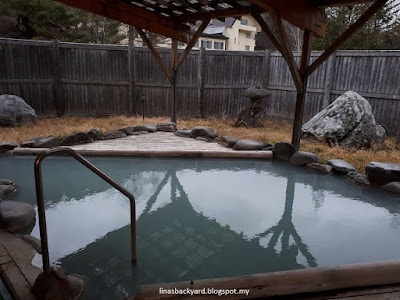 Our plan for the next two days was to hike along Lake Chuzenji and then relax and soak in the onsen after our return and that was exactly what we did.

The next day, we hiked about 16km from Yumoto Onsen to Lake Chuzenji and managed to view the famous Yudaki Falls, Ryuzu Falls and Kegon Falls.

On the third day, we visited the usual famous Nikko sightseeing sites such as Nikko Toshogu Shrine before making our way to Kinugawa Onsen for a night's stay there.

I'll try to blog more about Yumoto Onsen and its sulphorous hot springs, our hike and Nikko in general in future. Soon than later, I hope.
Email Post
Labels: Celebration and Holidays Checking-In Close to my heart Out and About Travel - Japan Vacation