SCORE Run Conquer The City 2018 is a two-series run, with its Night and Day edition.

The Night edition was held on Saturday, May 5th 2018 at Anjung Floria, Putrajaya and the Day edition will be held on July 22nd, 2018 at Dataran Merdeka, Kuala Lumpur.

It was a busy Saturday for us and we were out until evening and returned home for a short rest before I prepared to go run that night.

Dinner for me was a simple Gardenia Butterscotch bun and sugarcane drink bought at Hero Supermarket in Putrajaya. 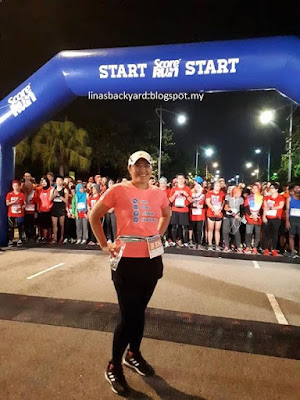 I joined the 13K category this time and a few of my friends did too. I was trying to locate a friend who said she's already in front of the line (she's a podium placing runner) but try as I might I couldn't locate her there. Rabun mah. Hahaha

She finished 10th place in her category! Congrats Yanie!

I bumped into a friend who was doing the timing at this race and he offered to take my photo in front of the starting line.

And this is the only photo I had for SCORE Run Night Edition in Putrajaya! 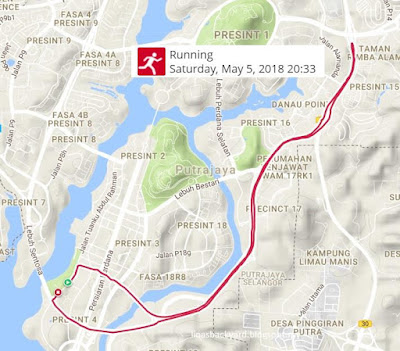 Running was pretty uneventful. The route followed a standard 10K route in Putrajaya but because we were in a 13K race, it went on for a couple of km before we made our u-turn at KM6.5. A no-brainer for both organizer and runners who are used to run in races held in Putrajaya.

But those extra distance saw us causing traffic jam at two sections of the route and Putrajaya, not being famous for its patient drivers; had us runners being honked at those two sections.

But kudos to the traffic marshalls and traffic police at these two sections for managing both human and vehicle traffic well.

The route saw its fair share of hills and downhills and because I didn't run at all this week, I took it easy. The huge 13K crowd helped to slow down my pace too anyway.

I was just happily plodding along, trying to be conservative as the night was really warm with just the occasional breeze to keep us cool.

There were only 3 water stations allocated in the 13K route (compared to 5 at Besraya Highway Challenge for the same distance), at KM3, KM6.5 & KM10 (according to my GPS watch because I didn't see any distance marker along the route). While the volunteers did their very best to serve us, I noticed that they were quite undermanned and overwhelmed. No biggie for me because I can pour my own drinks anyway (and help pour for others too).

I do make a point to thank volunteers while running in a race but I also am not hesitant to "scold" those who aren't doing their responsibility.

I saw a girl holding the traffic wand at a junction at KM2.8 being engrossed with playing her handphone and I got pretty miffed. When I saw another girl doing the same thing at KM9.5, I told her "sudah-sudahlah main handphone tu."

Then, as we were approaching the last WS, runners behind me were shouting "Runners keep left" as there was a concrete mixer truck approaching slowly.

Granted, the driver was really careful and patient while driving through us, but where was the race traffic marshalls, that they can allow the truck to pass??? Oh yeah, playing with their handphones.

The traffic crew and those wearing orange vest located at the last WS didn't do anything when they saw the truck approaching and just kept on chit-chatting. Nice.

As I said, the run was pretty uneventful, just another night run for me. It did feel like I was running in a small, no frills but rather expensive race because distance markers were non-existent until the last 5km.

I reached the finish line and joined the queue for my medal. I approached the second guy standing at the medal table and asked for my medal. He asked whether I got my bib ticked yet and I answered not yet. He insisted I get my bib ticked before he'll give my medal which is weird for me because I didn't see anyone with a marker after I crossed the finish line. In the end, I just walked away, without my medal and about 50 mtr later, a girl approached me, wanting to tick  my bib. "What for?" I asked. "I wasn't given a medal."

I saw some unripened bananas given away to finishers and decided to skip that. After thanking the volunteer who were giving out mineral water, I left the race venue and head off to where Hubby & Son were having their dinner.

Leaving Putrajaya at 11.00pm, and driving pass the same road I had ran earlier, I saw traffic cones that were used to close-off two lanes of Persiaran Timur were still left on the road. Without a shadow of a crew picking them up. In my humble opinion, if there are no runners on the road anymore and it was already beyond the supposed COT, the traffic cones should be removed ASAP to avoid causing more inconvenience to road users.

Seeing me returning without a medal, Hubby joked that I might as well just run at home, at night instead of taking the trouble to go to Putrajaya to run. True also lah. Cheaper some more. No wait, running at home is free! Hahaha

And it was quite nice to see a sea of red filling up the road in Putrajaya.
Email Post
Labels: Itchy Feet Race Recap