After spending two nights in Yumoto Onsen, we checked out and made our way to our next destination - to Kinugawa Onsen.

Compared to Yumoto Onsen, Kinugawa Onsen is much more livelier, with many hotels and ryokans dotted along Kinugawa River.

Kinugawa Onsen is nearby to tourists attraction such as Tobu World Square and Edo Wonderland Nikko Edomura so one can combine visits to these theme parks with a relaxing stay at one of the inns in Kinugawa Onsen. 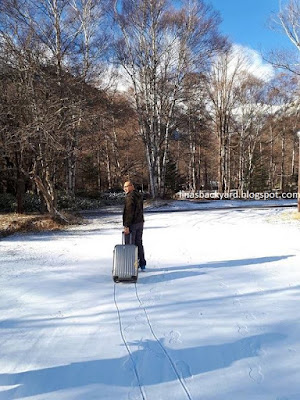 It snowed the morning we checked out from our hotel in Yumoto Onsen.

It was nice to walk on the road covered with a thin layer of snow to get to the bus stop that would take us to Shimo-Imaichi station.

While we saw snow covering the side of the roads and trees on the higher elevation (our hotel is  located 1,400 mtr above sea level), it was progressively warmer and we didn't see any snow when we got to Lake Chuzenji and when we zig-zagged on the iro-hazaka, the zig-zagging 48 curved slopes that brought us up and down the lower elevations of the central part of Nikko. 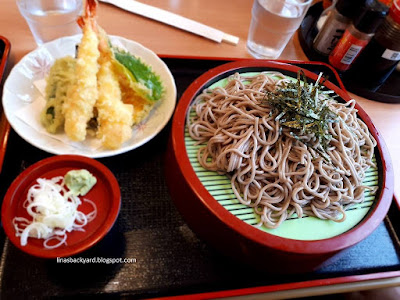 We had an early lunch at a restaurant near Tobu Shimo-Imaichi station. There were a number of shops dotted along the main street but some restaurants were opened yet when we were there.

Son had this soba & tempura set. 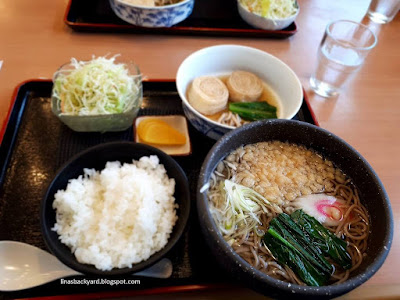 Hubby and I decided to try Nikko's local delicacy - yuba ad we chose the set with soba and rice that came with a bowl of yuba.

Yuba is made from the skin that forms on top of soy milk when it gets heated. It's beancurd skin lah...

But I tell you, this yuba is so delish!

After our lunch, and using our Nikko All Area Pass that's valid for 4 days, we board a bus and headed to Toshogu Shrine with a bus load of other tourists. 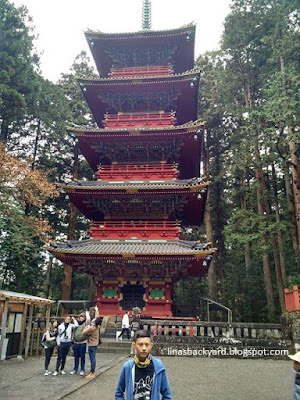 We spent a few hours walking around the shrine and instead of boarding the bus again, we walked back to Tobu Shimo-Imaichi station and continued our sightseeing of the area on foot. 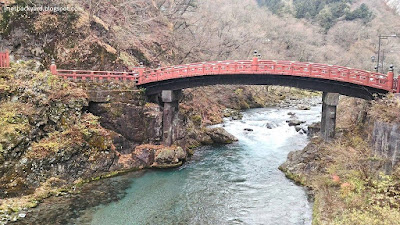 One notable sightseeing spot is this bridge - Shinkyo Bridge; a sacred bridge that stands at the entrance to Nikko's shrines and temples.

The bridge is ranked as one of Japan's three finest bridges together with Iwakuni's Kintaikyo and Saruhashi in Yamanashi Prefecture.

We later board our train to Kinugawa Onsen. 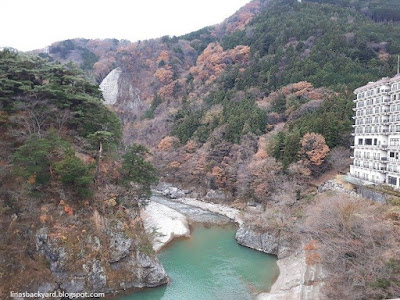 Our hotel was located by the riverbank of Kinugawa river and is only about a 10-minute walk from the train station.

We walked past several holiday apartments/inns and cafes and restaurants before we reached our hotel so the area was rather lively.

There's a footbath in front of the train station but we skipped that and hurried over to our hotel instead. 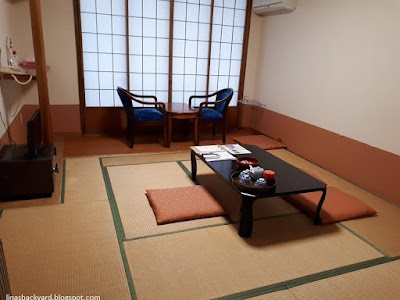 Check in was easy as the staff were conversant in English and we noticed that there were some Indonesian students doing arubaito (part-time) work at the hotel, taking care of diners for breakfast and dinner.

The hotel have a good number of foreign tourists and of course, there were waaaaay more guests here compared to our much quieter stay at Yumoto Onsen.

Our room was nice although not as big as the one we enjoyed at Yumoto Onsen.

But both are similarly priced and at less than 18,000 yen for three pax with breakfast and dinner per night, we considered it as a bargain. 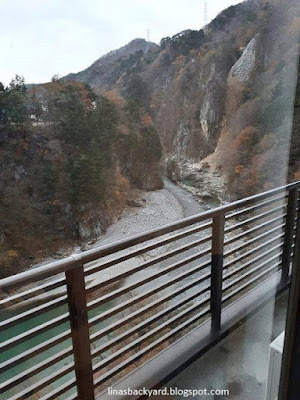 The view of Kinugawa river from our room. Would be nice to open the window and sit by it, watching the river flows by but it was winter and it was COLD! haha

Before dinner, we decided to head to the onsen for a soak first. 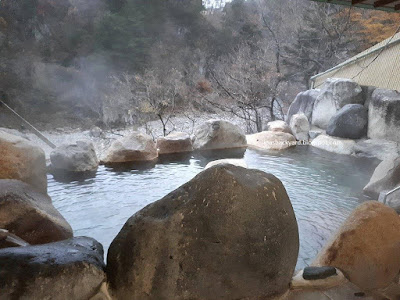 The female outdoor onsen has a view away from the main road but the river below is still visible. I had the bath for myself as I soaked myself in the hot water and a party of three came in right after I finished my bath. 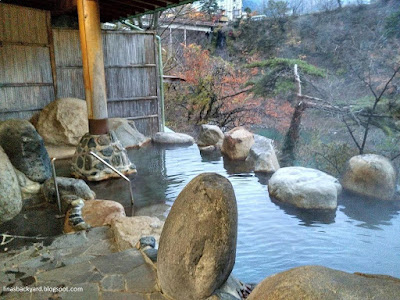 The male outdoor onsen has both the view of the main road and of the river.

During check-in, we made a reservation to use the private onsen and got a slot at 10.00pm. Slots for the private onsen (which one can book and enjoy without others joining in) for a 30 minutes slot each. All the earlier slots had been booked but we didn't really mind the 10.00pm slot.

We enjoyed our dinner, relaxed and later went down to the private onsen. 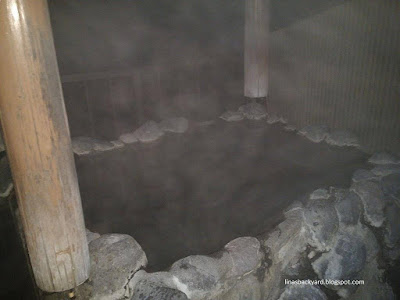 It was already dark of course, when we were there.

We only stayed in Kinugawa Onsen for a night and we head back to Tokyo the next day using the last day of our Nikko All Area Pass. 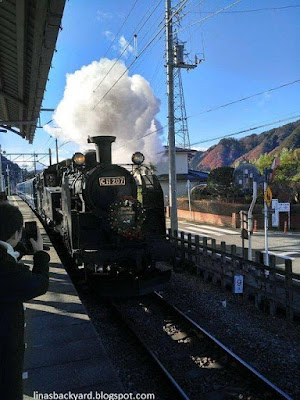 One of the highlights of travelling between Shimo-Imaichi - Kinugawa Onsen is this steam locomotive. Both just looking at it passing by, puffing its white smoke as it made its way to its destination or of course, by boarding it.

This steam locomotive, SL Taiju has been in operation since August 2017, and "Taiju" is the other name of the Tokugawa Shogun who is enshrined at Nikko Toshogu Shrine.

One need to make a reservation for a seat and tickets is priced at 750 yen  for adults and 380 yen for children for the 35 minutes train trip.
Email Post
Labels: Celebration and Holidays Checking-In Close to my heart Out and About Travel - Japan Vacation