What do you do for Son's 16th birthday? 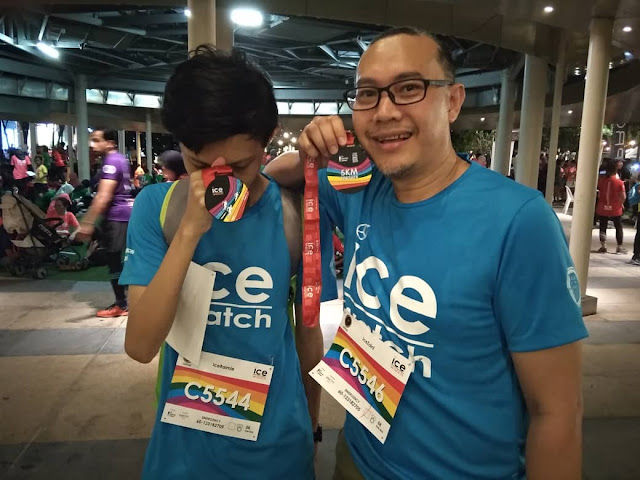 We signed him up to a 5K run at Ice Watch Light Up The Night Run (IWLUTNR2018) held at IOI Mall, Putrajaya of course.

We had joined the two previous editions held at Plaza Shah Alam before, as the run always nicely coincided with Son's birthday. Getting free Ice watches to add to his collection (he had received two before this) was pretty cool too.

IWLUTNR2018 is fun, not only because it's a fun run but because participants get to choose their favourite color for their event tees. On race night, we could see red, blue, green, pink, purple, yellow and orange filling up the road at IOI City Mall, Putrajaya.

Some runners who had registered for the VIP slot received free Ice watches with their race kits and other runners could win free watches through its lucky draws. Discounted Ice watches were also sold during REPC and event day.

The  night started a bit ominous as we could sense rain had started to fall but fortunately, it was just a drizzle and the run went ahead without a glitch, weather wise.

The 10K flag off started promising as I saw the road being closed-off for traffic before the flag-off. Traffic was halted to let the 10K category runners through but the road was opened again pretty soon after; right after the last of the 10K runners passed through and before the 5K flag-off which I suppose to avoid further traffic jam and also to appease irate drivers/shoppers coming in/out to the mall.

I'm not sure whether ample notice was made by the mall management about the impending road closure to their tenants and to be relayed to their customers like what Mid Valley Megamall did whenever they held their Mid Valley Charity Run.

10K runners had to make 2 loops of the route, and 5K only once. It got a bit chaotic when 10K runners made their u-turn to complete their second loop and ran alongside the 5K runners and then, with traffic being allowed to ply the road too.

I heard from someone, the people who was supposed to man the traffic flow decided to let cars pass through to avoid pissed-off drivers after a while. Not too sure about this, as I wasn't there to witness it.

We got to the finish line before the huge crowd of other runners arrived, and was able to get out from the queue for medals and refreshments quite quickly.

The organizer had two separate lanes for finishers - 5K & 10K but despite the obviously big signages, plenty of runners seemed confused. I guess having the signages made as arches would be better next time?

We joined the queue, got our mineral water and banana and then join the queue for Milo. I kinda miss the free flow of ice cream and Gardenia bread that we enjoyed in previous editions though. Hahaha

We lingered for a bit and took some photos before deciding to head home. Heading back into the mall, we could see the mall being swamped by participants of IWLUTNR2018.

Lucky we paid our parking with our Touch & Go (no, this is not an ad for T&G) so we skipped the long queue to pay for parking. Phew.
Email Post
Labels: Events Itchy Feet Race Recap