After our lunch at Malay Tea House in Central Market and admiring the architecture of the Sultan Abdul Samad Building, it's time to admire the Dataran Merdeka (Merdeka Square).
A prominent landmark in the heart of Kuala Lumpur; the Square commemorates the historic event that occurred there, when at the stroke of midnight on 31 August 1957, the Union Jack was lowered for the last time and Malaya became an independent nation. 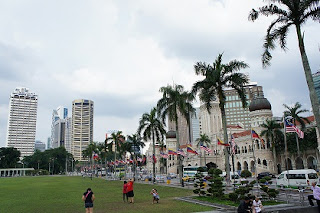 A view from the Dataran, of the Sultan Abdul Samad Building. 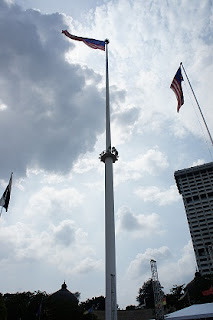 This 100m (328 ft) high flagpole, reputedly the tallest in the world, soars above the Square. 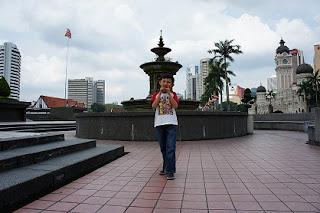 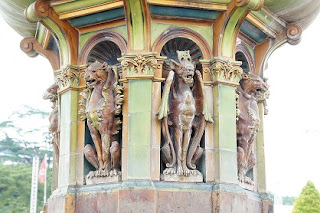 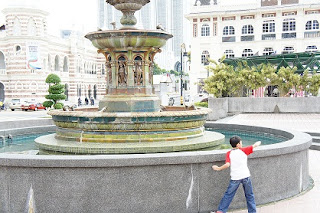 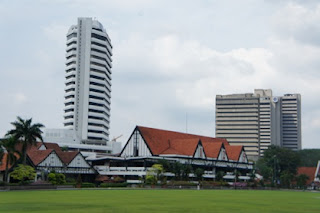 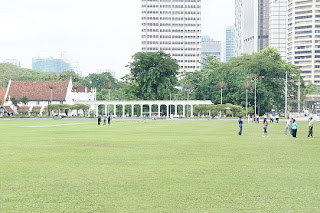 The Padang (field) was the focal point of much activity during the colonial era and was originally the cricket green of the Selangor Club (now Royal Selangor Club).  It was originally owned by the Royal Selangor Club until 1987 when it was acquired by DBKL or City Hall. In place of the Padang, a piece of land at Bukit Kiara was given to the Club which now forms the Royal Selangor Club Kiara Annexe.
The Padang was officially renamed Dataran Merdeka on 1 January 1990 in conjunction of Visit Malaysia Year 1990.
Trivia: Do you know that in 1926, after a bad flood (worst ever?) in Kuala Lumpur, the Padang was used to dry currency notes by Standard Chartered Bank? Wow! I wonder how the security was when all those cash were left drying in the sun like dried squids. :D
Email Post
Labels: Out and About