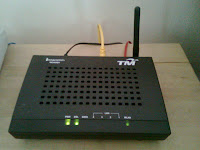 We've finally got ourselves a Streamyx account. After many years with Maxis Broadband and less than a year using Celcom Broadband, we now are proud users of Streamyx.
We've been using it for a month now, and so far so good. It doesn't have the awesome speed I experienced with Celcom for downloading my Korean drama but I guess I can live with that.
I can finish downloading a 700MB file within half an hour with Celcom but the fastest I experienced with Streamyx so far is an hour. A plus point of using Streamyx so far, for me is that Streamyx doesn't throttle the speed and limit our usage. With Celcom, once I use my 5GB limit, good luck dowloading anything within 8 hours! Yup, it'll turn slow unless I top-up and pay more to use. And during my "OCD" phase wanting to finish a Korean Drama, Sungkyungkwan Scandal, I did top-up RM50 for another 5GB just so I can download all the episodes in one go just so I can watch them all quickly!
There's a problem though. The house being wi-fi'ed now, and with each of us having our own notebook each (yup,including Raimie); we may be sitting physically together in the hall but have less interaction now. The three of us are too busy staring at our own computer screen!
Now, do we get another broadband account for my FIL's house? After all, when the school holiday's over, we'll be back to staying there on school nights.
Email Post
Labels: Rants and Ramblings