An Indonesian Fare At Bumbu Desa

On one of those rare occasion I do go out to lunch with the office people, eating somewhere nice is good. On Tuesday I went to Bumbu Desa at Mid Valley Mall for an Indonesian gastronomic experience. 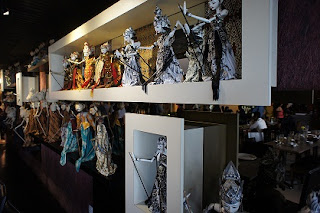 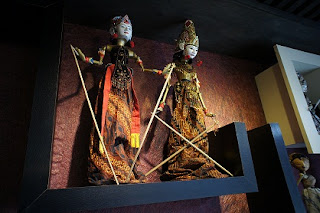 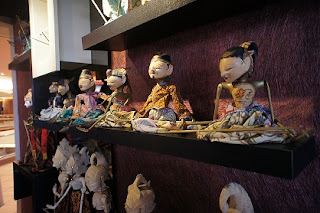 Pretty interesting decor with the Indonesian dolls lined up.
This was my first visit to Bumbu Desa so I have no idea what taste good so instead of flipping through the menu or deciding by looking at the array of food displayed on the counter and choosing them myself,  I called up in advance and ask for recommendation and opted for a set for 5 pax, priced at RM180.40 (and they throw in a 10% discount afterwards). Take note though. Although the food are lined up buffet style, the price charged ala-carte, and per dish of your choosing.
I didn't take much photo once I started eating so quite a few of the dishes served weren't captured. I was concentrating hard on eating. ;p
The few that I got were: 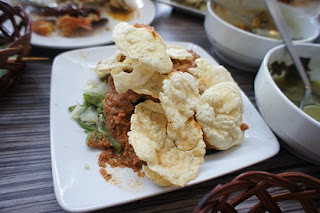 Gado-gado, which is somewhat similar to our own "pecal". Steamed vegetables doused with peanut sauce and served with emping (a cracker) made from seeds. 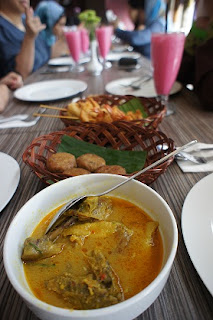 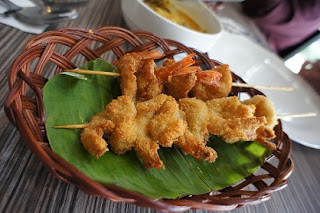 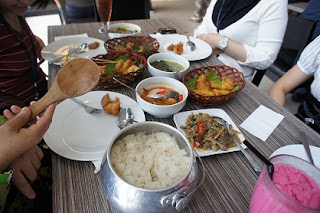 Some of the food me and my group ate.
In the photos : Gulai Ayam (chicken in yellow curry), Asam Pedas Patin (fresh patin fish cooked in sour and spicy gravy soup), Gulai Daun Sinkong (cassava leaves cooked in spicy yellow curry), Perkedel Jagung & Kentang (a blend of sweet corn/potato, egg and flour, deep fried to a golden crisp), Udang Tempura (prawns tempura), Tumis Jamur (whhite mushroom cooked with spices) and all washed down with either Ice Lemon Tea or a very, very sweet cincau bandung (the drinks in pink, for those who don't know what a bandung drink is).

Those in our set but not in the photo : Ayam Cabai Ijo (marinated chicken served in green chillies), Talapia Bakar (deep fried Talapia fish) and lastly for dessert we had Kolak Biji Salak (a mixture of tapioca and sweet potato flour, mixed with gula melaka and served with coconut milk).

There were mixed reviews about the food  from my group, but for me it is OK and I sure was full. So full I decided to skip dinner. With all those dishes served and paying on the average of RM32/pax, I think it's a good value.

Price is pretty reasonable and they have individual set menu too ranging from RM15.90++ to RM22.90++. Would you like to check them out? :)
Email Post
Labels: Makan Time Out and About