or translated as 1Student, 1Sports, 1Malaysia. While I laud the effort for a student to at least participate in one sports at school, I really, really hate to overusage of the "1" slogan and it being pinned to everything. Political propaganda in everything including my son's schooling? Enough with 1Malaysia already lah people!
While I hate political propaganda, anything that made my son go out and be active, I will support the event and this initiative for all student participating in sports at school in a commendable effort especially nowadays that parents are more inclined to stress on academic excellence and neglecting the need for their kids to be active.
Anyway, just like other parents and school-going children all over Malaysia; we woke up early on Saturday and headed off to Raimie's school. Part of the road had been closed off to make way for the children to run, and teachers were busy monitoring the situation.
We dropped Raimie off at his school and instead of waiting around, we decided to go to the Lake Garden (or should I say the newly renamed Taman Botani Perdana) for a jog.
The 1.5km run had already finished by the time we arrived back to Raimie's school and there was a "Sukaneka" event in full swing. 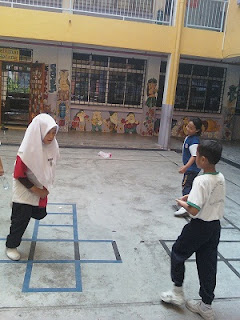 There were futsal, netball, congkak, ting-ting (hopscotch) and even games for parents to participate in. Didn't know that the day was going to be so much fun with plenty of activities other than the run because if I did, I surely would have brought my camera along. As it is, I just made do snapping photos with Zaini's handphone. 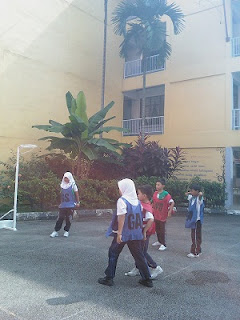 Raimie playing netball. Yes, mixed team netball. ^^ The girl playing WA for the blue team was good, and the boys in red team (my son included) were no match for her! But I tell you, girls can play football but boys really can't play netball. LOL
I like the fact that the teachers at this school aren't so hung up about gender segregated issues in sports at fun events like this. There were mixed teams for futsal too. 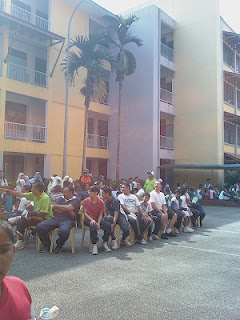 Zaini got roped in for musical chair shortly after he was spotted by the teachers there. It sure was hilarious watching the male teachers and parents fight for chairs with the students. Guess who won? It was Raimie's Dad. But Raimie wasn't happy because he said Daddy played dirty. Haha

We won tickets to the Malacca Zoo for four which we already agreed we'll pass it to Zaini's colleague. ^^
For the girls & mothers & female teachers musical chair event, the teachers called me up to join but I ran away! LOL Even the headmaster coaxing for me to join in proved futile. I was still sweaty from my jog, my hair all over my face and sure as hell stinky. I don't really want to be near people and stink them up! ^^!
All in all, it was a fun day. Kudos to the teachers at school for organising  such a fun event. I wonder how was the event at other schools? I noticed a Chinese school nearby held their sports day the same day and the school next to Raimie's school did nothing much other than let students and parents mooch around the school waiting for the time to go back.
Email Post
Labels: Itchy Feet Out and About School