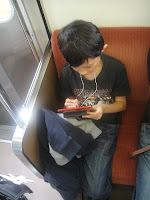 It can be hard to stop a child from being restless on a journey, right? It's not so bad if we are travelling in our car and he started being restless and whine and such because he would just disturb us and I can just scold him of being annoying. But if we are using a public transport, keeping him in check and making sure he didn't disturb other commuters is important. Sure don't want people to be annoyed with us.
How to you keep your child occupied on a long journey?
For us, because Raimie and Zaini are both gamers, whenever he gets bored of the scenery or the waiting, we'd allow him to play with his Nintendo DSi, provided he has a seat to sit on first! He is not allowed to play with his game while walking around! No, no, no.
And like whatever treat we give him, playing with games comes with a condition. He has to behave nicely to get the privilege to play it. No whining, no tantrums, no annoying behaviour. Do it and the game will not be at his disposal to play. 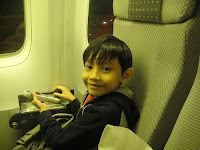 When he was smaller, whenever we are on a plane, he loves to check out the seats in front and at the back. To make him stay still, we used to bring magazines and books and even colouring books to keep him occupied. Now that he is bigger, he is just content playing and checking out the entertainment system on the plane.
He'll immediately put on his headphone and look for the remote once he was seated in his seat! However, no such luxury when we are flying to Japan with AirAsia this year-end. I'm so not gonna pay anything extra for entertainment. He'll just have to read a book!

That said, it's nice to see him using his imagination to keep himself occupied on long journeys at times. Shows that he doesn't need technology all the time to stimulate him.
We pamper him, we do but  I think we are strict to him too. I just hope we are doing it right. ^^
Email Post
Labels: Close to my heart Rants and Ramblings Vacation