Running For A Cause In The Bad Haze 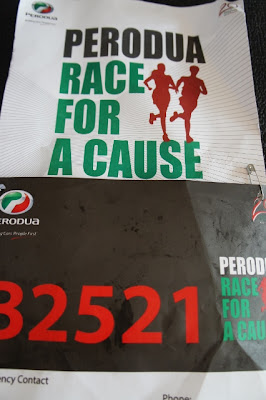 I wasn't supposed to run this Perodua Run For A Cause. It clashed with McD Olympic Day Fun Run which I had already signed up and run with the family.

As luck would have it, haze was bad this week and since McD Run has plenty of school children registered to run it; it was postponed till after Raya.

The haze caused a few friends to feel unwell, and a friend passed her bib to me. Thanks Aina!

After knowing about the McD Run postponement, I had planned to "bandit" this Perodua run. I needed a 15K run this week and following the runners in this run and running along the route would be safer than running alone. I prepared for my own hydration by wearing my hydration bag this time.

But as I got a bib, I had less guilt running alongside other runners.

I had an ambitious timing and aimed to finish at 1:45. I promised Zaini I'd finish before 2hours. Zaini was annoyed with me yesterday and told me to buck up and run "properly" instead of just mucking about during races.  Otherwise, I have to stop going to races and just run around the carpark. Wuuuuwuuuwuuu 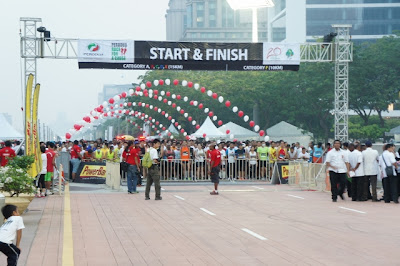 A hazy day and runners still turn up in droves. We are crazy!

Volunteers at the race handed out face masks to everyone there, by the way.


I started my run at what felt like an easy pace. Saw Has just as we were approaching the Seri Gemilang bridge and tapped her arm. Then saw another familiar runner, Maryati on the bridge and said hi. ^^

The first 10K was rather nice and flattish but I just shuffle shuffle along the way despite my plan to do intervals today. I was like, if I can hit 1:10 at 10K then it's OK. 11K came and it was 1:21. Oh dear. Guess I've been enjoying the water stations too much. Yup, I stopped at every water stations which was placed 2.5km apart and drank two cups at each stops. 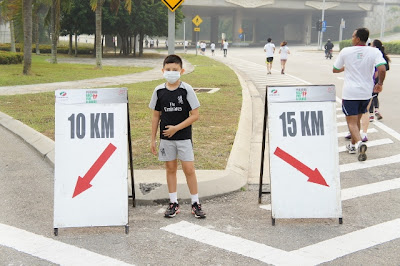 Raimie and Zaini waited at around KM10 to cheer me on and took plenty of photos of me and other runners. ^^ 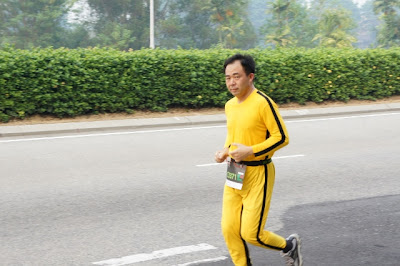 Like Bruce Lee who was running this morning. Hah Hah


I was ever ready to wimp out as I was approaching the dreaded incline after the 4th water station at KM11. But then, I remembered my promise to Zaini and tried to shuffle on. I really do no want him to be more annoyed at me. I have lotsa races lined up! LOL

At KM14.50 there was a final incline (more of a bump actually but try running for 14km, a bump can feel like a hill! mihmihmih) and I planned to stop and just walk that incline only to see the boys had stationed themselves on top of it! How to stop? Sure kena scolded if I stop to walk there. Huhuhu 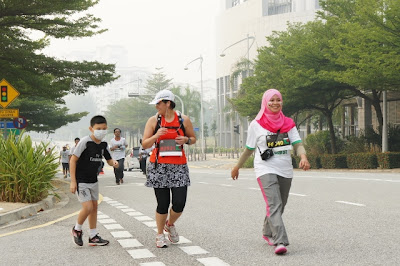 Raimie was waiting to cheer me on. 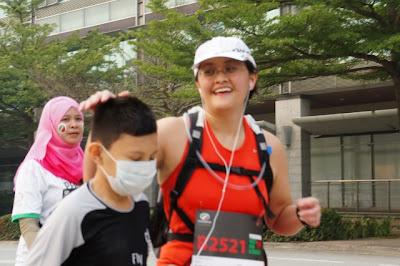 Ruffle ruffle hair a bit and I thought he'd follow his Dad to the finish line and wait for Mommy there. 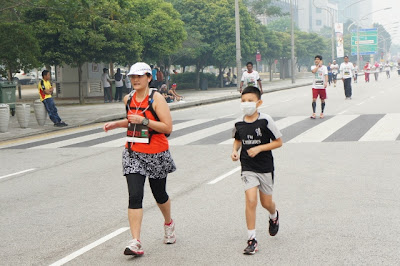 Instead, he ran with me all the way to the finish line. Mommy is super touched. ^^ 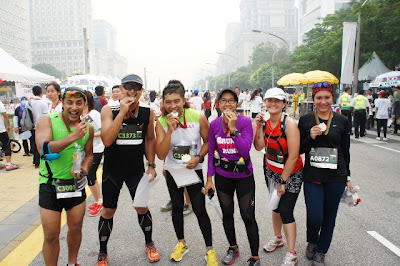 Then, it was time for photos. Lots of them! 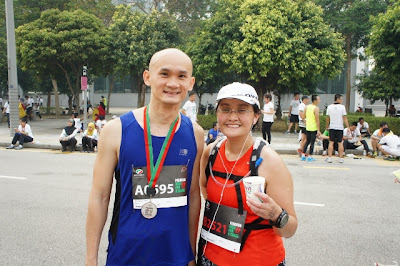 err... some random guy who I just asked to take photo with me. I really need to ask people's name lah in the future. 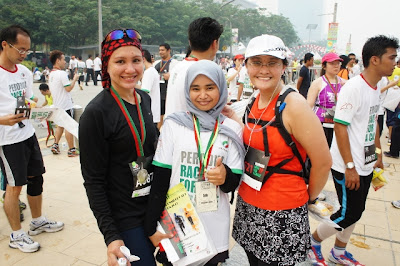 Millie, me and Nita who managed to bag 5th placing in the run. She missed a podium finish at the Alpha Run as she finished 11th yesterday. 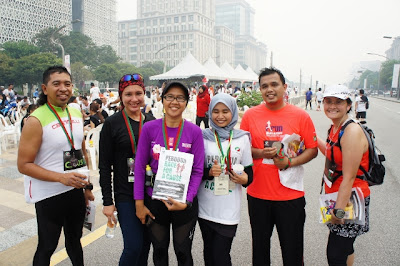 Met Mat Joe (the guy in Malakoff shirt) for the first time today. He had earlier said hi to us. It was funny, Mat Joe. You rode your bike and stopped in front of us and gave salam. We initially thought you wanted to ask for directions! HAHAHA ^^! 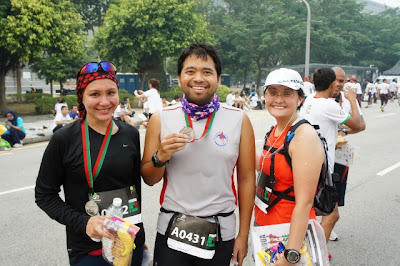 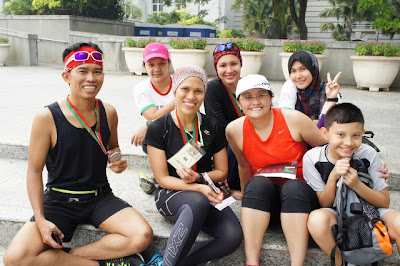 Then went to the steps of Palace of Justice to look for Bett, who wasn't feeling well today. She decided to skip the run but went to support her husband who was running.

The ladies, with another podium winner. Eena (the lady in black) got 4th place! Beside her was an ultra-marathoner; Ray who was doing his speedwork running this 15K run.

After that, time to scrounge for food. I tell you, Ru is totally right. I run for freebies and goodied bag! There wasn't much of a goodie bag at this run; just a snack pack but the refreshement stalls available for runners after the run were awesome!

There were games for kids too like bull ride, bouncy castles and stuff.

No Milo van but Dutch Lady was giving out chocolate milk instead. Great recovery drink, that. 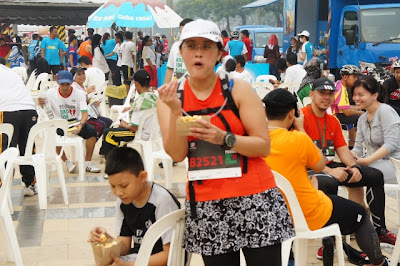 Got free popcorn too. FREE! Eat, eat, eat! LOL Kenyang, I tell you.

Yeah, haze was bad and we took a risk going out but then again, it is worse here in my housing area than in Putrajaya. Staying indoors feels like the same as being outdoors. o.O