That's what Zaini told me after I finished today's Mizuno Wave Run 2013. I finished the 16km run in more than 2 hours! I told him I didn't run much because I was hungry. Tough love from that fella. :(

I have to agree with him. I actually walk more than ran after KM9. It was like, meh... why suffer? I lost focus and interest and determination after that 9th km. WTF is wrong with ME!!!

But that said, it was FUN! FUN! FUN! I ran on empty stomach which wasn't fun (or comfortable) but I had fun finishing the route and meeting familiar and unfamiliar faces who made the effort to say hi to this slow poke.

The route was a reverse route of PNM 10K route + Powerman route... something like that lar... 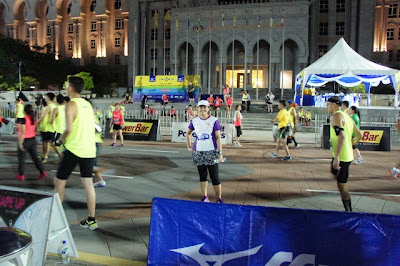 Me at the start line, probably 4minutes after flag-off. No pressure. No need to jostle and run in the crowd. ^^

At the first km or so, saw Andrew who just finished running 16K and  was just starting to run the race proper at one of the junction, talking to one of the race volunteers (Kelvin). Decided he was busy so didn't say hi to him only to have him shout "LINA!!!!!! SOMBONG!!!!!" LOL Soli Soli...

At around KM4, Bett said hi. I asked her the wehereabout of the rest of the gals and I guess they all had sped off in front of us.

Elvin said hi shortly afterwards. It was really a surprise since that was the first time (right?) we met. Then, just as we were passing by the Jabatan Peguam Negara, Hanim; who is Nannoor's older sis said hi. She was running fast and she said she wanted to catch up with her sister and another lady runner, Millie. Hanim is a sub-5 marathoner, by the way. *\0/*

Run run a bit more until I lost focus and decided to walk. This was just approaching KM9. While walking, Erma (a blog reader and also happen to be the younger sister of my MRSM mate) said hi and whizz pass me. Wuuuwuuwuu

I was feeling dizzy from hunger as I was so "clever" and only had a cup of coffee for breakfast. Didn't check the kitchen last night and didn't realize there was nothing to eat except Mamee, 2kg of grapes and a packet of patin masak tempoyak. Not really anything I want to eat so early in the morning. Sit around and watch TV for a bit and then, at 4.30am decided to go out for a short run. Ran for half an hour or so, got back home, change into a clean set of clothes and then off we went to Putrajaya.

Furthermore, I can't seem to sleep and woke up at 3am. So excited ah? Even dreamt of being late for this race. One and half an hours late. This is the second time I dreamt about being late to a race! o.O

Took a packet of energy gel as I was approaching KM10 but while it did give a surge and boost, it didn't help appease my hunger. Bumped into Elvin again after Pullman. He walked a bit with me, took photo, chatted a bit before asking me whether I want to run. I told him to go ahead as I was feeling... lazy! Bwahaha

He ran off and then I decided to trot for a bit until I approached the Seri Gemilang Bridge. Walk, then ran downhill, walk lagi, then run a bit lagi. Like that lah...

Just before the last water station, a GC runner; Atan Mustaffa said hi. I told him I pancit. LOL

Ran a bit in front of him, stop at the last water station to drink and trot off slowly again. At the last KM or so, he ran up to me and said he's following/pacing me. Not for long la... I walked at the last incline and he continued running and I ate his dust. ;p

Running the last 500m was not easy. The wind was blowing really hard and there was debris flying everywhere not to mention it was hard to run against the wind. 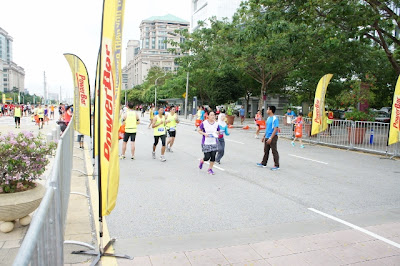 Approaching the finish line. Cap in hand as I was scared it got blown away by the strong wind. Another GC member was there taking photos. ^^


The line for our goodie bag after the run was surprisingly bad. I don't understand why the goodies were not packed inside the plastic bag to be distributed to runners. Instead, we were first given an empty bag, queue to take our mineral water, then the Perskindol sample, our medal and a pack of cereal and suff them in the bag ourselves.

It's surprising since Pacesetter event usually run like a well-oiled machine. A volunteer did apologize for the hold up though which was nice of her to do. Can't help to notice that there simply weren't enough people manning the goodie bag/medal tent.

Then off to another sponsor tent; a bakery. A posh one at that, with one opening soon nearby Bangsar Village. Posh buns and cookies after the run! After that, off I went to join the loooooong Milo queue. 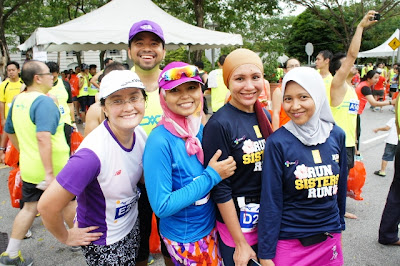 Met the ladies and one guy while queueing. 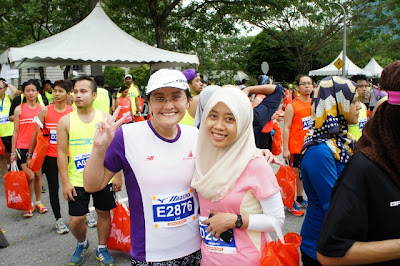 Finally managed to take a photo with Erma this time. ^^ 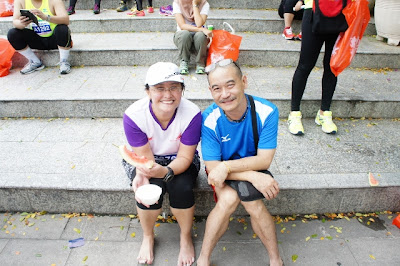 Then, disturb a volunteer and a very familiar face in the running circuit for a photo. In hand, watermelon slice and a bowl of warm taufu fa. Me likey! Pacesetter events sure got good eats one, I tell you. 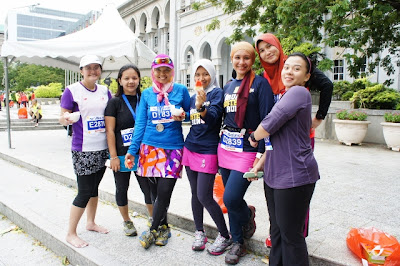 Then, lepak some more with the ladies; Has, Nannoor, Hanim, Millie, Betty and Aina. We (Zaini and I) didn't linger for too long as it did look like it was going to rain soon. 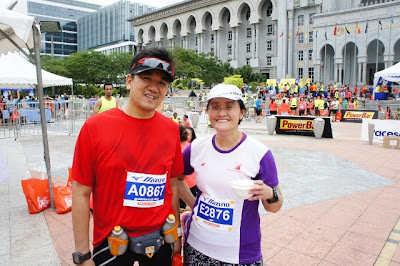 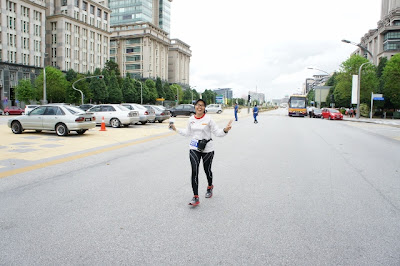 Walking towards our car, we saw these two crazy runners. They are amongst a few groups of hardcore runners doing 16km + 16km run that day. They ran 16km before the race started and continued with the second loop afterwards. Andrew, who I mentioned earlier was one of them. Actually, Andrew clocked some mileage before the race, race and ran 16km, and then... continued running after the race. HARDCORE!

For you guys and gals who are training for SCKLM 2013, all the best! Much respect to you all. :) 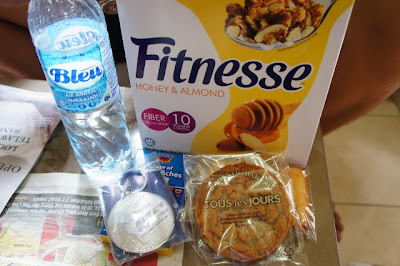 The bounty after the race. Bolehla...

photo update, credit to the ever marvelous Tey 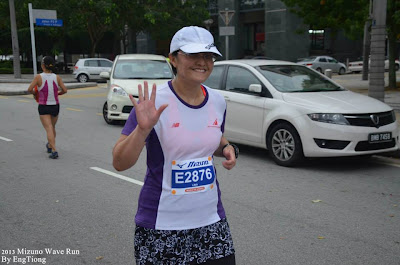 another 50m more or so to the finish line. ^^
Email Post
Labels: Itchy Feet Race Recap