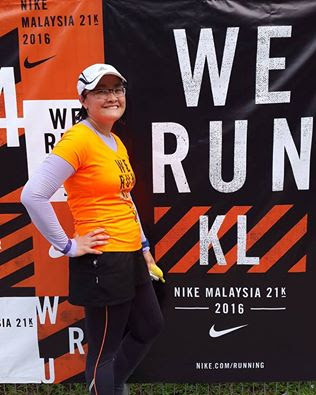 I joined Nike We Run KL 2016 not so much for the hype but rather because I needed the mileage. As usual lah... No race, so lazy to go for long runs one.

But I haven't done any running at all for three weeks since Bukit Jalil Half Marathon in March and only started running with a 5K on Monday, a 6K on Tuesday and that was it.

With no training for almost a month and Nike We Run KL 2016 not being a target race for me; I only wanted to do an easy run and hopefully maintained a 7:30min/km pace for the 21K. Finish in sub2:45 also good.

As I made my way to my pen (above 2;30), I marveled at how many elite runners that didn't look elite were in the elite starting pen. HAHAHA

Even the sub2 starting pen were almost filled with runners. Man, I didn't know there were so many sub2 runners for a 21K... 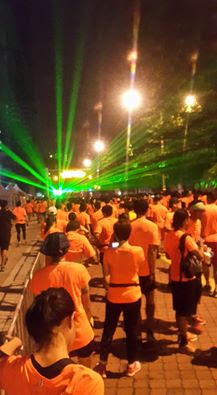 Before our start, we were entertained with laser lights and fireworks at the start line which was nice. We were flagged off at 5;30am and it took me almost 3 minutes to finally cross the start line.

The Nike We Run KL 21K route was rather flat and is good to chase for a PB, I think. I stuck to my plan to run easy and just followed the crowd. However it was quite surprising to see a number of runners who had started in the faster pen already reduced to walking as early as the first km.

Some parts of the route was totally closed-off for traffic which made it nice for us to run and certain parts, only one part of the road was closed-off with cones.

Water stations were generous, located about 2K apart but most served lukewarm mineral water and isotonic. I only got a cold drink at one water station. With such a warm and humid weather for us to run in, it would be nice to have a cold drink... Ya ya ya... I am manja. Sue me.

Cannot fault the traffic control, the marshall and the volunteers at this run but I wish the organiser had something fun for runners to enjoy while running along the route, It was too quiet! Probably because all the fun crowd went to run in Route 68 instead. :P

Plodded along and got passed by a whole lot of friends who always have encouraging words as they passed me and finally crossed the finish line in 2:44.

Anyways, again - nothing to fault the organiser for the run. Everything went like clockwork.
They had an area where runners can dip their feet in ice after the race, For a 21K run! Luxury!
Stretching section too where volunteers helped runners to share.

I just wish I had a more fun run.
Like I did at Bukit Jalil Half Marathon. Got taufufa and watermelon to eat, milo to drink and lucky draws some more...
That said, I will not complain Bukit Jalil HM is expensive ever again! LOL
Email Post
Labels: Close to my heart Itchy Feet Race Recap