Langtang : Summits of My Life 3 By Kilian Jornet Charity Screening 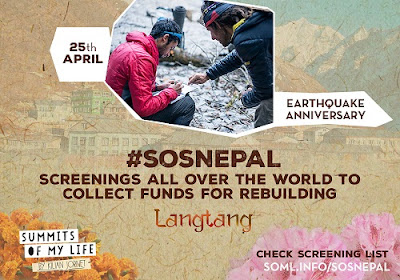 Yesterday, on Apr 25th 2016, a special charity screening was held all around the world to mark the anniversary of the earthquake that devastated Nepal in 2015.
Excerpt from Summits of My Life blog:
Kilian Jornet presents ‘Langtang‘, the third film in the Summits of My Life project. Directed by Sébastien Montaz-Rosset, the film is the story of a journey to the heart of Nepal.
In April 2015, ultra runner Kilian Jornet is preparing for an expedition to Everest as part of his project, `Summits of My Life’, together with alpinist Jordi Tosas and filmmaker Sébastien Montaz-Rosset.

Two days before departure, a 7.8 magnitude earthquake hits Nepal with devastating effect and Jordi’s beloved Langtang Valley is all but eradicated. Putting their original objective to one side, the team travel to Nepal with the hope of offering help in the place that they hold in their hearts.

"Langtang"‘ is very different from the previous films in the Summits of My Life project.

Athletic objectives are put to one side as the film documents the days following the earthquake with the team being some of the first to enter the Langtang Valley. Their emotions are reflected in the film, as initial confusion gives way to optimism. The Nepali people remain positive and optimistic as they gather their strength to rebuild their lives.

“Langtang was a very particular experience for me, I have never filmed anything so emotional. It may seem like a tough story but it’s also very optimistic. Only the nepalese people can win this fight”, Sébastien Montaz-Rosset explained.

From Malaysia side, I excitedly jumped on the bandwagon when I heard Team Running Project is getting on-board for the special screening here and offered my help.

MYNIC Berhad, which is also the organiser for Mybuddies run had generously pledged to donate 5 euros for each viewers at the screening held by Team Running Project to be donated. With the pledge, Team Running Project was able to offer complimentary viewing for the public who are interested in the cause.

With the kind sponsorship from Ten Senses Sdn Bhd, the team got a hall rented at GSC IOI City Mall, Putrajaya.

Moola Snack Bar was on board too, providing a snack bar for each of the Langtang viewer that night.

With just a small hall available, the team had to "ration" the viewers for the screening. Sorta.

Running Project offered a number of seats for the public and ALL were taken up in a matter of hours. Those who weren't able to get a seat were put in waiting list for any cancellation.

It sure touched me at how much the running community are interested in Kilian Jornet's cause.

The team had also a list of special invited guests - ranging from representative of running groups, race photographers, runners and sponsors too. Not many though and it was a pity that we can't invite everyone. We wanted to, but we didn't have enough sponsorship $$$.

I was also touched at how humble people are. A top marathoner asking what he could do at the screening. Well-known race photographers insisted on taking photos at the event despite being told to just come and watch movie. Guests offering to pay for the seats.
Anyways, if I may be bold to represent Team Running Project here:

We would like to express our heartfelt gratitude at everyone's support in helping Langtang. 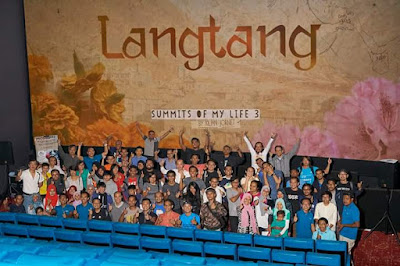 On top of the pledge from MYNIC Berhad, the team collected about RM700 that night from the viewers.

All proceeds collected will go towards Summits of my life charitable project. The proceeds will go towards re-building 116 houses in Langtang and allow the families there return to their homes.

For those who wish to donate, you can do it directly to:
http://www.migranodearena.org/es/reto/8922/langtang/