The Inaugural Nilai Half Marathon

I only knew about Nilai Half Marathon from a friend's sharing at Facebok a few months back. At that time, the HM fits into my training plan but I hesitated into joining due to lack of information and the fact that it doesn't have an online registration portal.

It was only on Tuesday, a few days before the half marathon that I finally contacted one of the HM committee member to enquire whether they could still accept late registration as registration had already been closed at the end of April.

Lucky me, they still have slots available. I got the form whatssaped to me, which I duly filled and whatssaped back with a copy of M2U transfer for my registration fee of RM50.00. Pretty easy actually. Who needs online payment portal and pay extra $$$ for the convenience again? hur hur

Although I had known about Nilai Half Marathon a few months back, signing up to the HM was rather a rash decision. My last long run was at Nike We Run KL in early April and I haven't been training since.

With the HM looming just a few days, I "crammed up" a few running session but I know it wouldn't be enough. For Nilai Half Marathon this time, it's just a case of finding an avenue for my mileage and hopefully not do too bad. 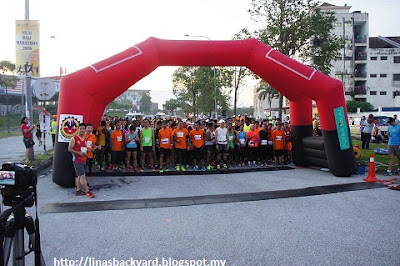 The flag-off for Nilai Half Marathon was at 7.00am which is pretty late for a half marathon here but I didn't get too worked up over it. Just run lah.

Nilai Half Marathon only offered one distance category which is of course the half marathon (21K) for Men Open, Women Open, Men Veteran and Women Veteran. 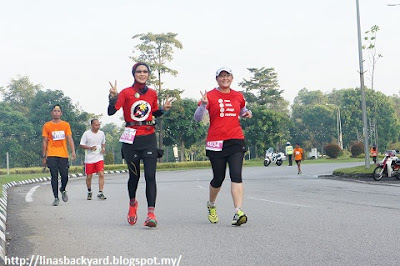 Although the turnout was less than 500 runners, I feel the number is quite respectable for a half marathon run especially for a first time event. More so seeing that strong runners came in droves to run in Nilai Half Marathon.

Just like Nike We Run KL, I knew that I'd start having problem after the 10K mark because of my lack of training and mileage and sure enough, for Nilai Half Marathon I started to struggle after reaching the 13K mark. The 7min pace I did for the 13K went down as I started to have walk breaks in between.

The undulating route was actually nice and we ran around some nice neighbourhood apart from through the town's center but yeah, after 13K and what with the heat and all... I wilted. Huhuhu

Most of the route was coned off for runners and the traffic police and Majlis Perbandaran Nilai staff who were on duty manning the traffic did an awesome job. Runners were not left alone along the route as we would always see one of the crew along the route. Thank you!

That said, some Nilai drivers were impatient. One lady driver in white Myvi refused to slow down or stop despite being instructed to, in front of one of the water station. So dangerous lah!

There were 7 water stations along the route, placed about 3K apart. At the 11K water station, we were served bananas and at two water stations, the organiser provided handkerchief soaked in iced water for runners. I like the handkerchief! After using it, I kept them in my pocket so that I can use it later. ^^

All the hills we had to tackle, and we still needed to tackle one last hill just 2K from the finish line. Ugh.

Just as I was approaching Dataran Nilai, I saw hubby waiting for me by the roadside. He told me I was the 20th Women Veteran to finish. Damn. (As if I can aim for a top 15 lah... Muahaha).

Still couldn't see the finishing arch despite already clocking 21K and I followed the runners in front of me towards the entry point of Dataran Nilai.

I already clocked 21.20K when I made a left turn for the Dataran and not seeing a finish line yet, I was like - F**k it. Not gonna run anymore. And I wasn't alone who felt that way. Runners in front of me stopped to walk too. 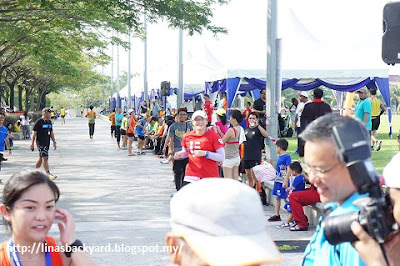 We started running again about 200m towards the finish line and when I crossed it, I already did 21.60K.

The Majlis Perbandaran Nilai YDP and Labu ADUN were at the site, congratulating runners and to hand-out the finishers' medals. 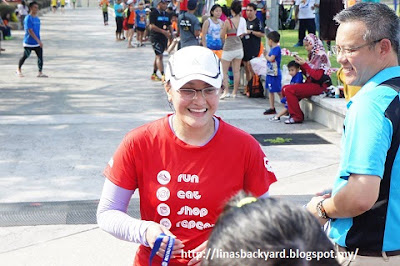 But as always, I declined to wear my medal. I took it and put it in my pocket. Hihihi

Got my medal, a volunteer passed a bottle of chilled mineral water which she opened for me and a banana and later I lepaked around the finishing area with a few friends while relaxing and waiting for the lucky draw session.

It wasn't an easy run and not only because I didn't train. The route was a tough one and one that I'd love to repeat next year.

The organiser had promised that Nilai Half Marathon will be a yearly event and will offer more cash prizes.

Truthfully for me, I don't care much about prizes for podium winners. Or what kind of medal they offered. Or what t-shirt they gave out.

But I do appreciate what the organiser had done for this first Nilai Half Marathon in terms of taking care of runners.

It's so nice to just go out and run and return to the basics of running, sometimes. 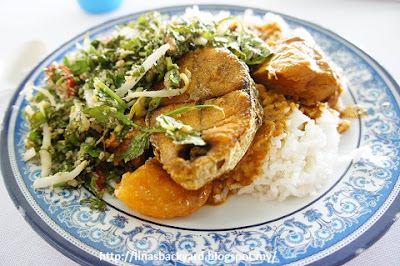 Apart from prizes for top 15 runners for each category (and there were even international categories), we had a lucky draw session with 50 prizes up for grabs. Alas, no luck in winning anything this time.

After the lucky draw session, we were treated with a lunch buffet and it was delicious! 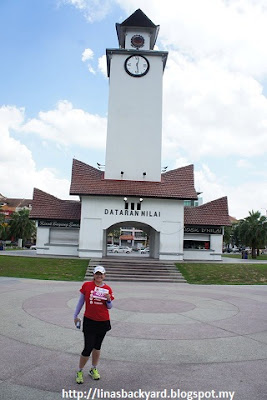 Thank you Nilai Half Marathon for an enjoyable morning. 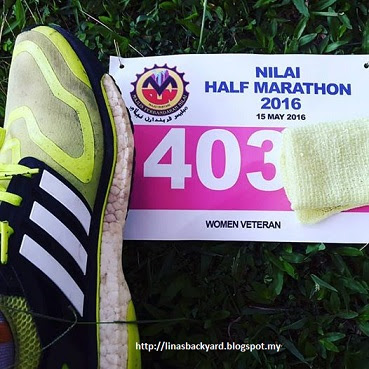