So, I'm back to Larian Bomba after a two-year hiatus.

Just like my last Larian Bomba in 2014, we ran in the same route. There are still no timing chips, still limited medals given, still two water stations... It's pretty much the same. Hahaha 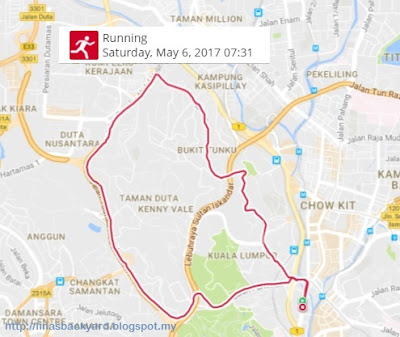 But with that, you get the old-school way of running in races. No-frills, hand-drawn race map by FTAA, cheap registration fee (RM30) and you had to fight for your medals (well, Men Open had to fight for the 150 medals allocated. We in the Women Open category pretty much had it easy despite the 120 medals allocation). And FTAA officials still scold me for wearing my bib wrong, and not on my chest. Hahaha

Anyhoo, had a bit of drama prior to running it. I was suffering from a bad case of gastric since last Sunday and had yet recovered fully from it.

A cup of oat for breakfast, two charcoal pills and two Actal plus 4 toilet visits later, we made it to the starting line of Larian Bersama Bomba 2017. 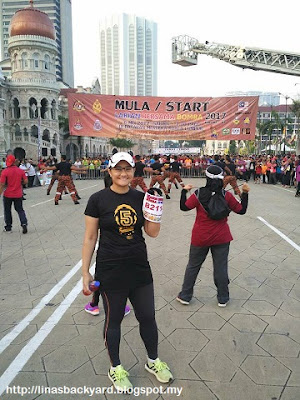 Just in time to see abang Bomba doing some warm-up routines before 10K flag-off at 7.30am.

The weather was kind to us and we had an overcast morning.

I told myself to be easy with the run as I was still feeling a tad nauseated. It was pretty much running at perceived effort and I didn't glance once at my watch, in order to train for the upcoming Standard Chartered KL Marathon and I kept telling myself, it's OK to be slow just as long as I tackle all the hill, running.

Did that, until I reached KM5.5 thereabouts and I started walking. Hahadoi. Another walk breaks was at the flyover near Jalan Parlimen. It wasn't even steep or long but I always, always walk at that stretch. Grrrr...

Along the route, we saw plenty of Bomba trucks and abang Bomba, of course.

As I reached KM9 and approaching Padang Merbok, I ran. I knew that the route will be over-distanced and I knew I had about 2km left to go.

It was a downhill stretch and I thought I'd just run at a controlled pace to finish, but there was this one lady who kinda made me annoyed.

She kept running into me, making me move to the side in order to avoid her and she kept glancing at me. Not sure why though. So I just revved my engine and sped ahead and told myself, I better finish in front of her! LOL 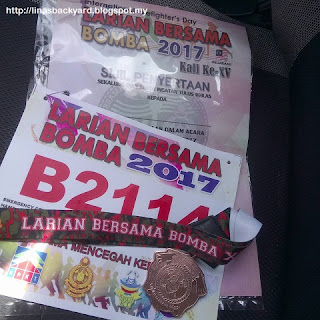 And finished ranked 30+ and got my limited medal.

Had to eat three Torrone sweets this time, just to run a 10K because I needed to feel full. A bit of angin in the tummy, then sure habislah my run. 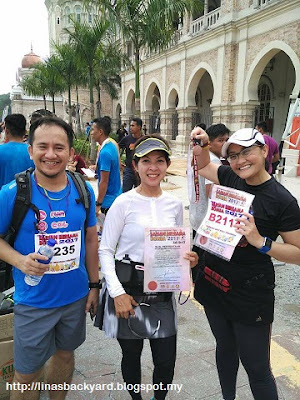 Lepaked a bit at Dataran Merdeka after the run and met with friends and fellow GC members before making our way home.

Cannot linger too long. I need to eat!

All in all, a productive morning.

Congrats to everyone running!