Just like last year, we were back to Kuala Kubu for the Highlander Series Bukit Kutu last Saturday.
The event is a part of a two-day running festival held in Kuala Kubu Baru, under the Visit Hulu Selangor 2017 program. The second race was the Hulu Selangor 30K which was held on Sunday.

Just like year, Hubby and I helped out at the race and this year, Son tagged along to help too.

Last year's race was a 12K trail run and the distance was added to make it a 15K trail run this year. One runner mentioned that she hoped that the distance will be increased next year as she wants to try running up to the peak.

Half marathon category next year? Why not? Hahaha 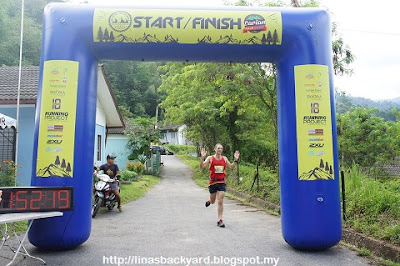 It was not an easy route but runners were quite satisfied with the challenges given. (I heard la...) Have to say, he was really dedicated and serious doing his task.

Runners in Highlander Bukit Kutu 2017 needed to check-in (i.e. report to secretariat) before the start of the run and later, check-out (after finishing the run).

The reason was for their own safety. Organiser needed to make sure that those who went in the trail ALL came back safely and accounted for.

We did make it easier for runners to do the check out as we jot down each bib numbers as they pass through the finish line arch and collect their medals so that they did not need to be hassled in doing it. 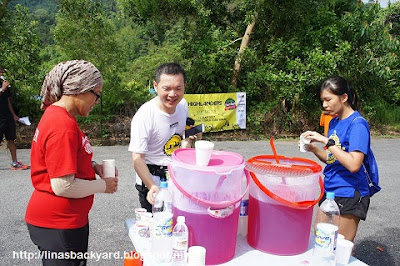 Just like last year, it was still a no-frills, low-key event this year. There was an increase of participation this year compared to last year, but as the emcee announced during the event, the total numbers of participants allowed will be capped at 500 pax max (as advised by the Renjers).

And oh, to hike up Bukit Kutu, one does need a permit.

After the event, and after the prize presentation ceremony; runners were encouraged to join the organising team and also members of Majlis Daerah Hulu Selangor (including the Yang DiPertua Majlis Daerah) and gave out packets of rice to the Orang Asli in Kampung Pertak.

Part of runners' fee were used as contribution for the Orang Asli Kampung Pertak.

Photos of runners at the finishing line can be viewed, click here. Also in the album were top 20 (Men Open and Men Veteran) and top 10 (Women) results.

And on Sunday, we were back to Kuala Kubu for Hulu Selangor 30K. Both to help out and also run in the event. :-)