Kuala Lumpur, May 8, 2017 – Fresh from its roaring success last year, PUMA Malaysia is all set to bring it to the next level with the fourth edition of the PUMA Night Run in Cyberjaya. With RM16,500 worth of prizes to be won, the run is looking to attract 12,000 participants this year. 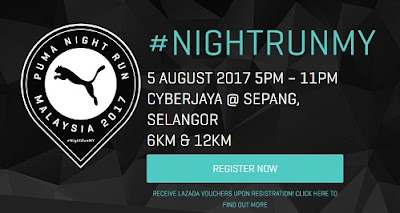 PUMA Night Run 2017 will also be the first time for the run to have two running categories to choose from as there will be a 6KM run for the fun and leisurely runners, as well as a 12KM run for the seasoned competitive runners.

The entry fee for the PUMA Night Run Malaysia 2017 is set at RM119 for 12KM and RM89 for 6KM (All prices are exclusive of GST). Upon successful registration, all participants would receive the PUMA Race Kit which includes a PUMA Night Run tee, PUMA towel, PUMA shoe bag, finisher’s medal (to be given after the race) and other sponsored freebies. In addition to that, PUMA is also loading up the Race Kits with some super cool goodies such as glow in the dark shoe laces, LED arm bands and glow sticks to add to the fun.

PUMA is known as one of the pioneers in the night running scene having first introduced the run in 2014 as a platform for runners from all walks of life to celebrate the joy of running and experience a carnival-like atmosphere filled with activities and performances. The run will end with the ultimate after-run music performance, featuring Singaporean Kpop artist Gen Neo and renowned local artist, Black.

PUMA has also released the official full-length video that captured all the fun and excitement from last year’s PUMA Night Run Malaysia, which can be accessed through the official website.

Registration for the PUMA Night Run Malaysia 2017 is now open and participants can register via www.puma-nightrun.com.my.
Email Post
Labels: Events