After Larian Bomba on Saturday, Hubby and I joined Coway Run on Sunday, thanks to The Marathon Company who graciously extended the invitation to us.

I'm trying to control my pacing and slow down to my goal marathon pace, in preparation for SCKLM 2017 which will be held in 2 weeks' time and I still went a tad too fast during Larian Bomba. 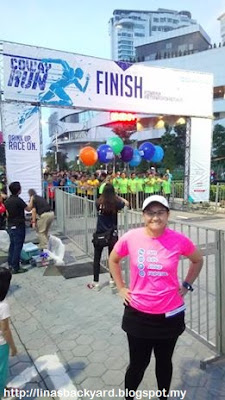 I told myself to take it easier during Coway Run.

Coway Run had pacers so I thought maybe I'd just follow the 7:30 pacers this time.

But after realising they were doing a 6:40 pace for the first 2.5K (up to the first water station), I decided to ditch them and ran by my own pace (which I didn't know since I'm still trying to gauge it by feel instead of constantly looking at my watch). 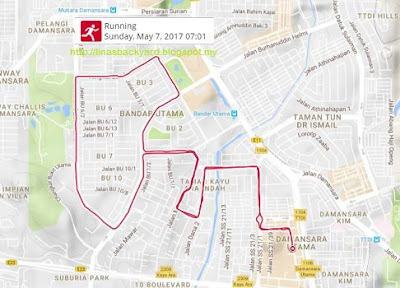 The 10K route covered neighborhood backyards (jalan belakang rumah orang) and despite the lack of marshall along the route (only a few were seen at junctions, together with traffic police) and weird placing of traffic cones; the route was quite safe for us to run - simply because the neighborhood drivers were patient and careful.

I find the route nice, with good sections of uphills and downhills but hubby said it was boring for him.

For me, I find the miles just melt away (maybe because I was pretty much holding a Zone 3 effort lah).

And while we were on the left side on the road, we saw D&S (Dignity And Services) Run on the opposite side of the road. Two run in the same neighborhood, on the same Sunday! But we didn't exactly merged with them and there was no confusion on the route. For me lah. 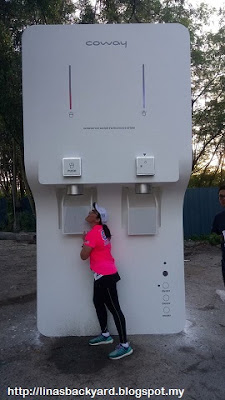 Arrived at the 2nd WS and saw a number of runners queuing up to take photo with the Coway's giant water purifier, and I joined the queue.

Thanks Adik Pengakap for helping to take our photos!

Very enthusiastic WS crew at the 2nd WS, a lady was shouting encouragement to all of us. Thank you!

After photo and a drink of the filtered/purified Coway water, I continued my run and had so far resisted the urge to be lazy and walk.

Although I was in front of the 7.30 pacers, I could still hear their voices and knew that they weren't that far behind.

At around KM8, I bumped again into a runner who came all the way from Perlis to join Coway Run. He came and ran to support Coway. Such a good agent lah! We talked a bit before he sped ahead in and I was still trying to maintain the same effort.

When we reached the last WS, I knew the route would be over-distance and I also knew that we'd face an incline before finishing. Damn mental lah! Hahaha

At KM9.9, I took a walk break and chit-chatted with a fellow runner for a bit before making an attempt to run again. By this time, the 7.30 pacers had passed me and they were shouting to runners to follow them if any of us wanted to finish in 1:15. 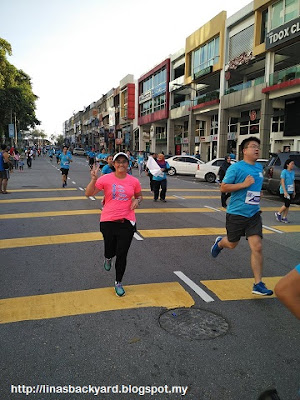 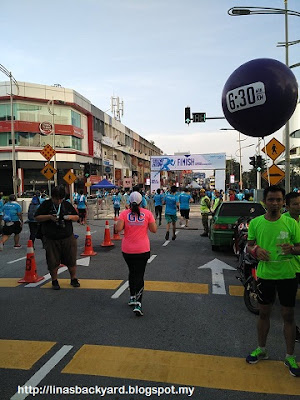 So actually, I kinda failed to nail a 7.30 pace, which I wanted to maintain for SCKLM FM.

Anyways, I do have more trust in SCKLM pacers. Hahaha

All in all, traffic control during the race notwithstanding, I did enjoy my run.

I was given a bottle of Coway water, a banana and my medal (of course). 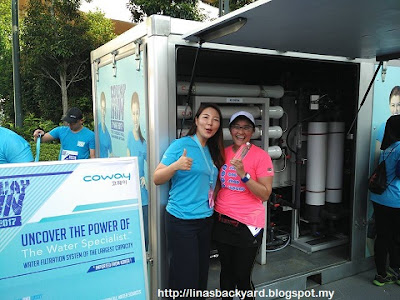 Then went to take photo with this Korean lady before going off to drink more Coway water. Bahahaha 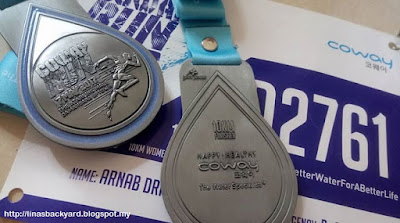 His and Her medals.

Thank you again The Marathon Company for a good Sunday outing!