A Special PJ Half Marathon Edition

It was PJ Half Marathon's 30th year in 2018 and the organizer had came up with a special category to celebrate its 30th year edition. They added a special 30K category to the popular half marathon event!

Anyhoo... Long story short, I got lazy in training and didn't want to suffer needlessly with running a half marathon after three weeks of non-existent training mileage so I contacted the organiser and they had graciously allowed me to downgrade my category to a 10K. 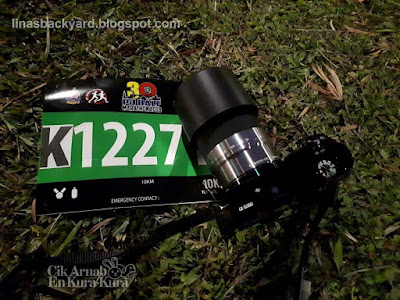 There was a hiccup at the race kit collection day when my name wasn't found in the database. I had to wait for over one hour to get the bib issue sorted but a crew finally helped to assist me and I got it settled.

Because I ran in the 10K category, Hubby and I only left home at 6.00am and we parked our car at Taman Jaya Park. There was still ample parking there when we arrived and we just had to walk a few hundred metres to get to the Start Line at Padang Timur.

The plan was, Hubby will take photos until I finished my run and then it was my turn to take runners' photos. We weren't official photographers of PJ Half Marathon, of course but it's something we like to do at races that either one of us attended.

Despite the emcees repeated announcement on the Start of 10K category and reminding 3K runners not to start together, I noticed many runners with 3K bibs starting together with us. Perhaps they do want to run 10K but the slots were sold out when they wanted to register. *bersangka baik* Otherwise, it's pretty stupid to do that lah!

There were 2 water stations along the 10K route, at 3K and 6K mark. The route was well marshalled and although there were a few junctions that weren't manned, the traffic seemed to be rather patient with us runners. Cars that shared the route with us, where there were no total closure were driving slowly and carefully beside runners.

Despite not having any training mileage for the last three weeks, the first 6K of my run went rather well. I was plodding along slowly and steadily and was quite happy with my 7:30min pace. All through the first 6K, I was thinking, "Hey, the hills here aren't that bad!"

Yeah, then we reached KM7 and the hills got longer and steeper and I was reduced to walking most of the uphill section. Demit. Hahaha

The 10K route was nice and it pass through both the main roads (with traffic excellently controlled by traffic police and race marshalls) and around housing areas. 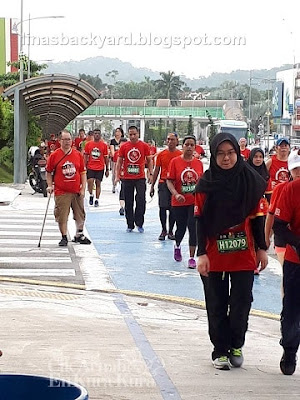 At around KM8 in front of Jabatan Kimia, I marveled at this guy's grit at doing his 3K with his cane and all. Respect!

There was a sign later telling runners we had only one km left. I looked at my watch which only showed 8.3km and wondered whether the 10K route was underdistanced.

Then after running for another kilometer, there's another sign telling us that we had another one km to go. 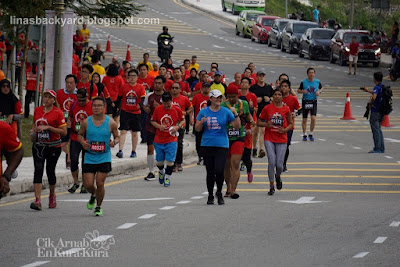 After all the ups and downs along the route, it was thankfully a downhill at the final kilometer as we ran towards Padang Timur where the Finish Line was located.

I crossed the finished line, saw a few friends, helped push a guy on a wheelchair to the field area and to collect our medals (there was no ramp to assist him to enter the field section and three ladies - one was a fellow runner and another one was a volunteer I called to help us had to help him), took my medal, bread and joined the looooong queue for 100 Plus. I had thought runners would be given a bottle of mineral water upon finishing but tarak.

After taking a few photos with friends at the field, I joined Hubby who was busy taking photos by the roadside and took over photography duties.

It was a fun morning. Initially I was glad to run in 10K instead of 21K but later, I wished I had just run 21K instead! Hahaha

Photos that we took at PJ Half Marathon can be viewed at our Facebook page Cik Arnab & En Kura-Kura. Do LIKE and FOLLOW us for more race photos and updates.
Email Post
Labels: Events Itchy Feet Race Recap