I went for another SCORE Run last Sunday, after running in the SCORE Run Night Edition earlier in May 2018. 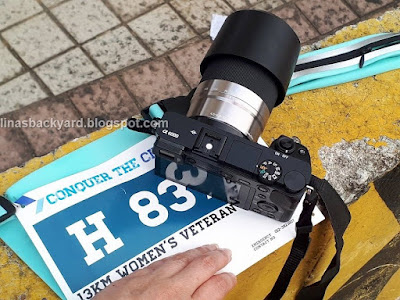 Despite the Start Line at Dataran Merdeka, the run route was a departure from the usual running route that we would run in, in other races. The route (for 13K which I entered) was reminiscent of the old SCKLM and the last Nike Half Marathon route. 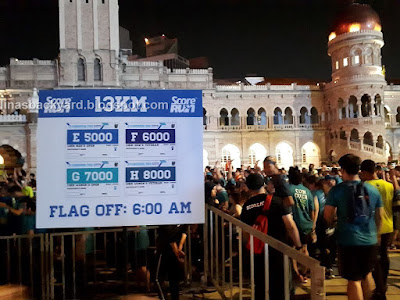 My category the 13K; was flagged-off at 6.00am. A bit too early for my liking for a short distance and even Hubby grumbled. Hahaha. It’s also too close to Subuh’s prayer time. Because it was only a 13K, some runners opted to flag-off much later so that they can observe their Subuh prayers.

I was at the opposite of Masjid Negara when I saw the 21K runners passed by. I stopped for a while to take some photos of them and wave to a few friends who did the 21K.

I started way at the back and after I cleared the timing mat, it was a really slow start for me as there was already a massive number of runners in front of me and most of them were walking.

Although it was good to see a HUGE number of runners or walkers (in any categories in any run), with such a huge number, I really need to be mindful to arrive way earlier than I usually do and start farther up in front to avoid walking behind others for 1 or 2 km before the crowd started to thin a bit. Having to be patient to be able to start running when one was finally able to do it wasn’t really a happy start for any form of race.

It was a humid morning with no breeze whatsoever for the first 4km or so and well, nothing much to see along the route too. Yup, morning run in KL can be a torturous experience. I kept wanting to cut short my run and head back to Dataran Merdeka but oh hell… I didn’t bring any money to board the LRT. hahaha 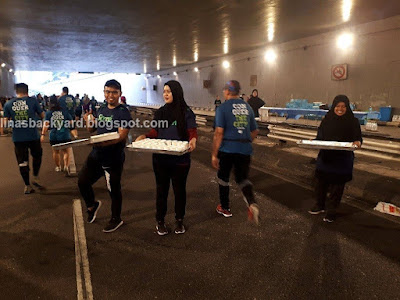 It’s pretty much running up one flyover over another until we made our u-turn kat KM6.5 mark. 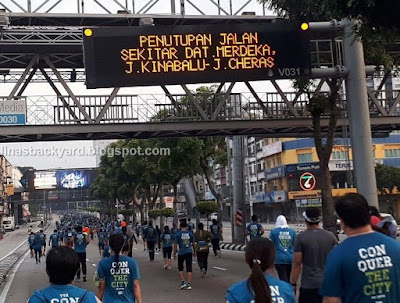 I have to say, despite a non-scenic route, it was pretty nice to be running along a fully closed route. Unlike Putrajaya where it would be impossible to do a full closure of the route we ran in, SCORE Run Day edition was better managed in terms of safety and traffic control.

However, same as SCORE Run Night Edition, the organizer was still being stingy with their distance markers. I only saw distance markers placed countdown style with “5” kilometre left onwards for 13K runners.

Why the double inverted comma? 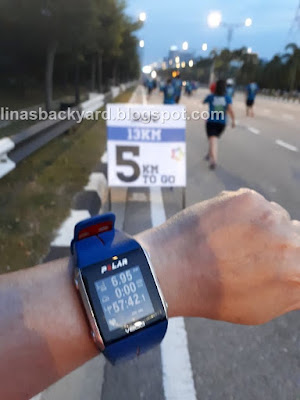 Because my Polar reading was approaching 7K when I saw this ‘5KM To Go” signboard.  That would mean, I just need to run 12K? 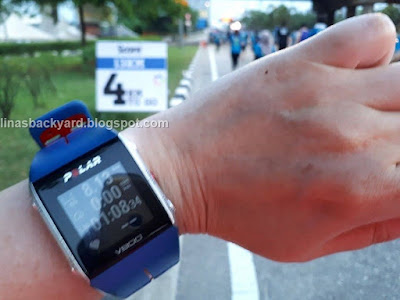 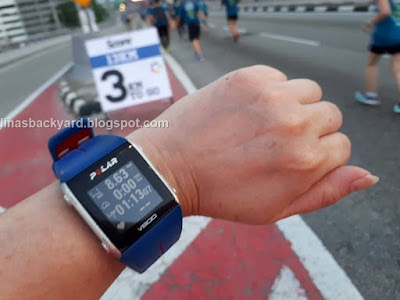 Then another distance marker was placed a few hundred metres away from the second signboard. A runner beside me also agreed that the distance markers didn’t tally with our GPS reading.

Either both our watches' GPS went wonky (could happen if we were running areas with high rise buildings) or distance marker suka-suka hati placed. Huhuhu

Anway, I didn’t see any distance marker for 21K runners although they ran partly the same route as 13K runners. I guess they just had to agak-agak and calculate their distance lah.

Along the route, I bumped into a fellow runner from up north and we started chit-chatting for a bit before I went ahead to finish the run.

Being slow, the slower 13K runners merged with the 5K runners as we approached KM10.5.

Then at KM11 (my GPS reading tallied with the distance marker here. Yeay!), it was near impossible to run or even brisk walk as 21K, 13K and 5K runners merged into a two-lane flyover heading to Masjid Negara.

Morale of the story – if I really want to run in a race, I really have to run faster to avoid merging with other category runners who were flagged off later. Otherwise, tahan saja lah. Other people also pay money to join the event what. Hahaha

Anyhoo, 21K runners later made a turn to head to Lake Garden while both the 13K & 5K runners went straight ahead when we were running towards the Main Post Office building. 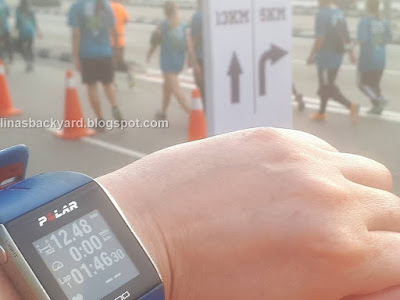 KM11 distance marker was spot on. But KM12? A sign the run is gonna be overdistance? Luckily, it wasn’t a lot otherwise, pengsan! LOL

The Finish Lane and Line were separated for each category as we approached the final 50m or so – 21K to run in the left most lane, 13K head to the middle lane and 5K runners to the right. It was good, in a sense that there was proper control for distribution medal, finisher tee (for 21K runners) and refreshment. Runners then could rest, refresh and wait for their friends at the Dataran’s field area. Tents and mats were placed for runners’ comfort which was nice.

And it was waaaaay better than the queue at SCORE Run in 2016 when it was held at Berjaya Times Square.

What wasn’t so cool was, I kinda pity the 21K runners who were finishing their run.

There was a Milo van parked just a few metres away in front of the finishing line, right beside the 21K lane. What it caused was – 21K runners had to dodge other runners who had finished, to cross the Finish Line. 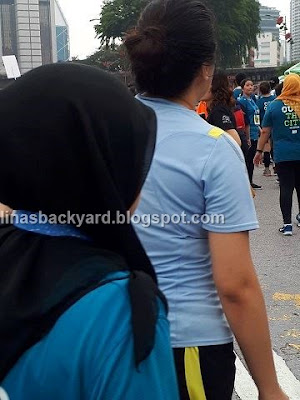 There was this one official photog too who didn’t seemed to be too bothered about his safety as he was standing right in the middle of the lane for finishing runners as he was busily taking photos of the Celcom Staff that had a truck opened at the event. He could’ve collided into runners and maybe fall down when he was walking backwards trying to focus on the food trucks and non-runners!

I almost shouted at him to move away but luckily, he stepped away before I had the chance to do so

Hubby needed to send Son to school that same morning so I had to wait for him to arrive before I could start taking photos with my camera.

While waiting for him, I snapped some photos using my handphone.

Photos taken by us between 8.00am to 9.20am at SCORE Run Day Edition can be viewed at our Facebook page Cik Arnab & En Kura-Kura.

It was fun meeting friends and some were even kind enough to bring Milo to me as I was busily snapping photos of other runners.

I will be running in NPE Highway Challenge next week so see you there, if you’re running in it too!
Email Post
Labels: Itchy Feet Race Recap