Madam Kwan's For The First Time

First time for our son, that is.

Hmmm....I have to tell you, taking Raimie out for a meal to a place that offer local cuisine isn't something we do often. He eats out at restaurants, yes; but it's either Western, Japanese or Korean mostly. Local food usually meant either eating at a Mamak place or stalls.
We were undecided where to eat last Friday and out of the blue, Raimie wanted to eat at Madam Kwan's and vetoed out my choice of going to Pasta Zanmai. It's been awhile since I last eaten at Madam Kwan's. I think the last time I ate there was with a blogger friend, Anna who was on vacation in Malaysia. Zaini of course, would go to Madam Kwan's for lunch with his colleagues. He's more high-end than I am! (~_^)
Didn't order anything special for dinner, normal stuff like
Zaini and I have two very different personalities, he's the calm, neat one. I'm the impatient and messy one. And our different personality can be seen even on our dinner plate! 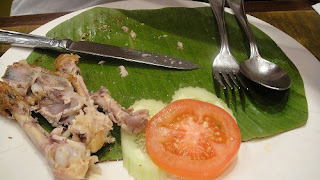 Which one would be mine? I think it's pretty obvious. 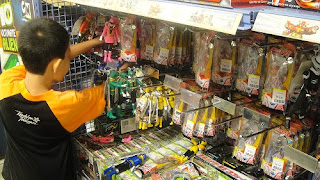 After dinner, we let Raimie go in to the toy store nearby. Poor boy though. He's been conditioned to only see and touch those toys and not expect us to buy any.  We only allow him to buy toys of his choosing once a year, on our vacation. Where? Head to Urutora No Hi if you didn't know the answer yet! (^o^)
There is of course exception to this rule, that's when we decide to give him a treat but he knows its a privilege and not something for him to demand.
We bought him the Nintendo Wii on the condition that he gets either one 100% paper or be the top scorer for one paper on his year-end exam. Even his Disneyland visit came with a condition. Get less than top three placing in class, no Disneyland visit last year! We don't want him to grow up expecting everything be served on  a platter. He has to earn it and work for it.
Anyway, got his mid-term result on Friday. Zaini went and met up with his class teacher while I waited for the UniFi technician at home. Not much issue at school but his teacher did mention that Raimie can be quite noisy at times. His spoken English ability needs to be improved and as does his Malay Language comprehension (imagine that!). We do know that Science and Maths aren't much a problem for our son so no issue on those two subjects. Of course he is quite strong in Islamic studies too. After all, he always emerge top in class in Sekolah Agama. Sorry if I sound like I'm bragging about my son because I am! ಠ‿ಠ
Email Post
Labels: Close to my heart Makan Time Out and About School