It's The Carpark For Me 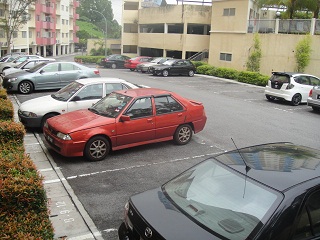 The area I live in is not flat, and "blessed" with many inclines so when I first started running, the little inclines that I needed to face served as my early, pre-hill training runs. *^-^*
I was so self-conscious running around the apartment blocks at first but the fact that my neighbours can see me served as a motivation for me. I pushed on and not stop and walk because I would ashamed my neighbours would see me wimp out, especially when some of those neighbours are my colleagues too. Being vain does serve a purpose, sometimes! LOL
My neighbours and the security guards are so used to seeing me doing my nightly runs by now. The guards were looking somewhat interestedly each time I make a loop when I first started out; 6 months ago but nowadays they don't even bat an eye at me even if I do a midnight run!
I guess if I live in a terrace house, it'll be harder for me to do a night run so I consider myself lucky to have an area that I can train relatively safe. But even if I don't, I think I'll find a way to train safely. Where there's a will, there's surely a way.

And come to think of it, my treadmill motor breaking down was the best thing that ever happened to me, running wise. It made me go out and find other alternative. And being out and seeing other joggers/runners made me want to run more and better. I find it hard to imagine pounding the treadmill for two hours and not be bored to death.
Email Post
Labels: Itchy Feet