There'll sure be a deluge of race reports posted for those who participated in the PBIM and I'll have loads of fun reading them soon, I bet! :) And congrats to all those running and finishing PBIM! You guys did great!!!!

For me, no PBIM yet. Instead, on the same day the PBIM, I joined the IOI Community Run and did 7.7K. My last race for the year. I would love to join some of the races scheduled in December but we'll be away and I value my vacation more than running a race! xD

The day prior to the Run was ominous for me.

On Saturday, we endured traffic jam from Seri Kembangan all the way to IOI Mall in Puchong, because I needed to pick up my race kit. Arriving there, and going in the mall, I realised that I somehow lost the parking ticket that Zaini passed to me moments earlier. After searching for it in futile, I told the now already pissed-off Zaini to let it go because I'll just pay for the lost ticket. What for frowning and fretting over split milk, right? Especially if it's me who had done the spilling! xD

I woke up at 4.00am on race day to get ready (which includes a whole load of stretching) and at 5.30ish, the rain decided to pour. Zaini already *complained* about the ungodly hours I wanted us to be at Bandar Puteri (6.30am, by the way) and the jam, the lost parking ticket and now the rain, I was ready to DNS (did not show) the race! But of course, Zaini drove me there without much prodding despite me telling him that it's OK if I don't run today. Ah, all the drama!  Kakaka 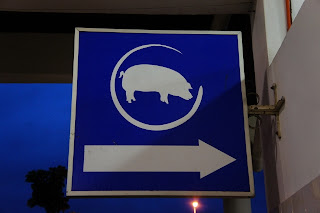 Arriving the race venue, the first order of business was making a pit-stop. I had my first toilet break at the market nearby, the Puteri Mart. Of course plenty of other runners making a stop there too. *^-^* 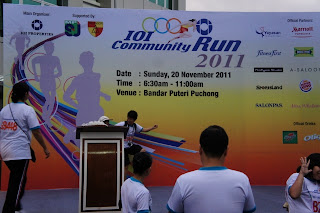 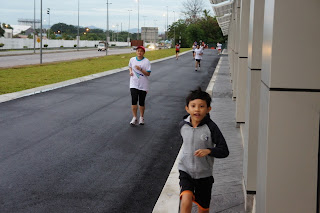 My own warm-up session. Raimie sportingly accompanied me while I was warming up. There sure were plenty of runners putting on their game face, doing their warm-up sessions. Hmmm... I thought all hardcore runners had gone to Penang.

Then another pit-stop at the portable toilet. Loooong queues there. 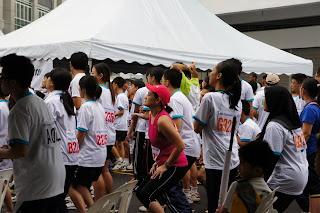 and then, the warm-up session by Fitness First. Can't really see the stage area and didn't really understand the lady who were giving instruction. I thought she said "break" when she meant "breathe". Adoila... make sure your pronunciation correct or people like me cannot understand what you were saying. huhuhu 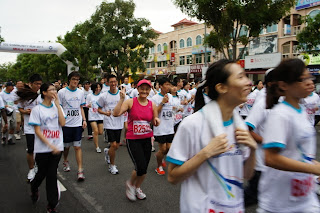 At the start of the Run. Can't really run any faster since the human traffic was bad. xD It took an effort to swerve amongst the runners and it sure didn't help when after 150-200m from the starting line, there was already an incline runners had to face. Plenty of runners decided to stop and walk. I know I'm not fast but in my mind, I was like - "Keep to the left, keep to the left folks" to the walkers just to avoid colliding into them especially those who sprinted as suddenly as they stop in the middle of the lane. ;p

I was running blind in this race, that is to say; I have no idea how the route was beforehand. And for some reason, my Nike+ started to register my mileage in miles instead of KM and I really don't know how to translate my pace in miles! @.@

I decided to run at a conservative pace and checking on how far I ran only occasionally because I had to mentally convert the miles I clocked in back to KM. Maths so early in the morning! Ugh, my head hurts! Kakaka

Three inclines later, I arrived at the water station. I was hoping for a Gatorade drink (after all, Gatorade supported this Run) but only gotten lukewarm plain water. I should've brought my own bottle. :(

As with my trainings, I realised that I am now becoming quite lazy in pushing myself. I mean, you won't see me running at a  pace that made me wanna puke anymore these days. Also, I only can pick up my pace later in the run, usually in KM3-4 despite doing all the warm ups earlier. I wonder how I can rectify this and yet not make me hit the wall way before  the finish line? 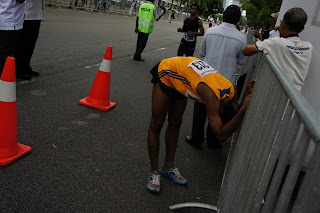 One of the early arrivals, puking. I think Zaini told me that he was in top 5 or something. 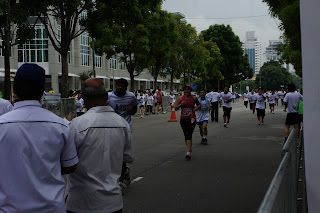 A few more metres towards the finish line! Wooohooo! 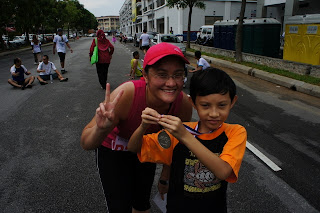 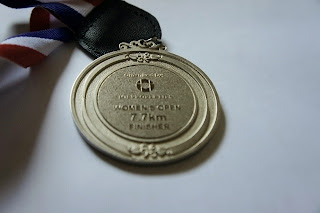 Barely managed to get one of the limited medals given out. 200 medals for Men Open and just 100 medals for Women Open. Raimie told me that I am great and that's all I need! ^^ 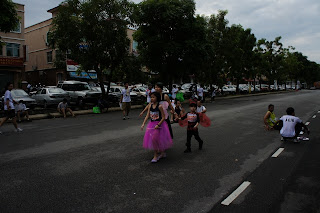 I think I only saw two group of runners in costumes. One guy (whom I think I saw at PNM too), running in a white work shirt and holding an Astro boy figure and this family here. Cute, aren't they? 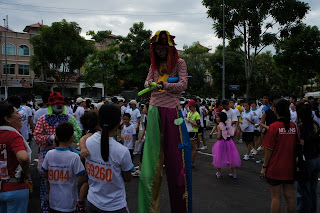 There were clowns at the Run 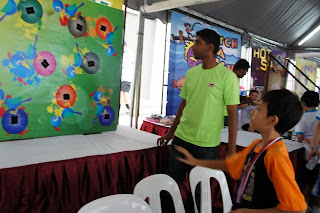 and few carnival games too. The Oligo stand had a looooong queue so I skipped that, queued for my goodie bag instead (another looooooong queue) while Zaini went and pick up a few cups of  lukewarm Gatorade for me.

There were plenty of traffic drama during the race. In between the route and at intersections, we could hear vehicles honking and drivers complaining to traffic police about the hold-up. I heard one traffic police saying "Keep on honking" to those irate drivers. LOL

Then, at the start/finish line where all the runners are now milling around, a car decided that it had to pass  through that road and were honking aggressively. Even if all these runners gave way to him, he definitely couldn't pass through because of the medal and certificates table were blocking/closing the road. And runners were still arriving to the finish line! The driver was booed loudly but I think that he felt that we runners somehow did him wrong because he actually stepped out from his car to pick a fight. Like, for real? What makes him and his one, single car so special against 4,000 runners, anyway? We runners pay our road tax for our vehicles too, you know. Unless of course, he owned the road lah... 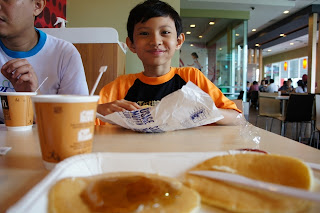 We didn't wait for the lucky draw and decided to head back early and had our breakfast at Bandar Puchong's McD. Breakfast for me was hotcakes because I needed my sugar boost!

Raimie was stoked and had actually said that he wanted to enter a race in future. OK, so now Mommy just needs to find a fun run to run with her son! :)
Email Post
Labels: Itchy Feet Race Recap