Let's see... why is the title like that? Because the race organisation for this so-called Taiping "International" Marathon was a mess. Big one. There are plenty of hate comments abound over at FB and I won't get into too much detail about it.

I prepared and braced for the worst coming to this race, especially as I've read Doc Julin's post about last year's event a few times over. Despite that, I still registered for it and went to Taiping. Why? Because I wanted to visit Taiping for a "Cuti-Cuti Malaysia". Zaini is rather free this month so I took the opportunity to schedule this trip. If you know us, you'd know that it's hard to see us vacationing somewhere local other than the few places we always visit. KL, PD and Cameron Highlands. That's about it. @.@

Anyway, back to the race.

Let's start with the +ve first :
Just three +ve? How about the -ves?
But despite all that, I had to admit that I had fun. I didn't have any expectation and with that attitude, I just had fun. Also, this run was just like my SCKLM run way back in June. Same kind of weather (overcast and not too hot) and lucky me - I had my first day of period on the day of the run... AGAIN! Boohooo!!! 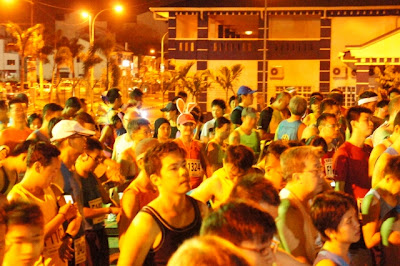 At the starting line. We were sheperded to the MPT building and somehow was "locked-in" there. Can spot me, right?


I started off easy. Can't run fast anyway since the first few KM was congested with us half-marathoners and the road was dark! But despite the darkness, few guys (one in a tiger cap) hollered hi to the "rabbit" an urged her to run faster. muahaha

Immediately faced an incline not even into the first kilometre and was silently cursing those who said the route is relatively flat. An "ayam" - well, he's a barefoot runner wearing the Chap Ayam runners vest said hello at KM5 while we were climbing a flyover. *pant pant* I didn't stop at the first two water stations because I ran with a Gatorade drink. Maintained a 7min pace for about 10K, I think.

I was running with a strong wind pushing from the side before the KM10 (IIRC) and it rained a bit. It was rather hard to run when one was wearing something as un-aerodynamic as a rabbit's ears! Decided to took it and the cap off for a bit, but put it back on because I can't see with all the rain on my specs.

Took a bottle of mineral water at the water station near Giant, threw my empty Gatorade bottle and ran with the mineral water bottle all the way back to the finish line. I was looking forward to isotonic drinks after KM12, but they served Pop drinks. I didn't know Pop is an isotonic drinks. @.@ Such a waste though giving runners full bottle like they did for this Taiping International Marathon. I saw plenty of unfinished bottles strewn all along the road. 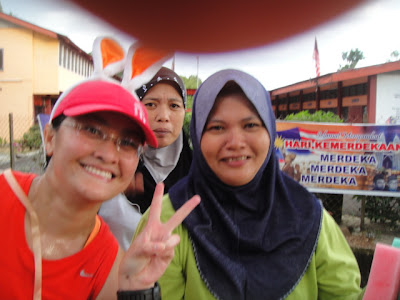 Decided I was going to have fun despite the chaos of the run and went all stupid, disturbing unsuspecting people. Took photos with these ladies at a water station because they said I was cute! Bwahaha!!!! 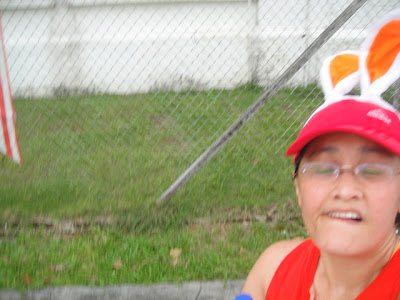 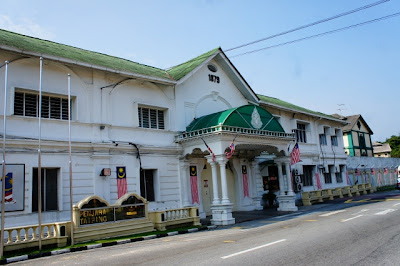 Second attempt - without me in the photo proved to be a much better success. 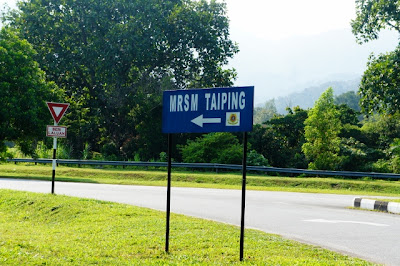 Found this en-route the run. It wastaken because of nostalgic reason. I was an MRSM student. Not Taiping's but my bestfriends (who are all smarter and more hardworking than me) went to Taiping after finishing their SRP (younger people now sits for PMR. Me old already). The creme de la creme of MRSM students all over the country were selected to go to MRSM Taiping while the rest of us continue on studying at our school.

Trivia : I went to three MRSMs, all in different states! No... not because of indiscipline, wokay! What's MRSM anyway? It's short for Maktab Rendah Sains MARA or MARA Junior Science College. I was in one from Form 1 - Form 5. 5 years of boarding school and I had enough!

Anyway...
After the second flyover climb, we turned left (a police traffic encouraged me to run faster as rabbit cannot lose to tortoise. Thank you Abang trafik!) and it was shady route all the way and on to Taiping Lake Garden.

Met more friendly race mashalls giving out the second check-point ribbons and bantered a bit with them. Also had nice support by the nice lady over at the mat check-point. Thank you for saying I'm cute! Muahaha And encouraging us to go faster. ^^

Hollered hi to a few dog owners walking their dogs... because the dogs are on leash! Dog owners at my place just let their dogs loose to chase me, while they talk on their handphones. Yikes!

It was during the final kilometre that a Kenyan lady marathoner ran past me... leisurely. By this time, I was already run-walking but perked up and made a semblance of running upon reaching McDonald's as I saw many photographers there and they are all pointing their lenses (perasan!) at me! Heard people cheering for "rabbit" and I can't help but smile and pickep up my pace. 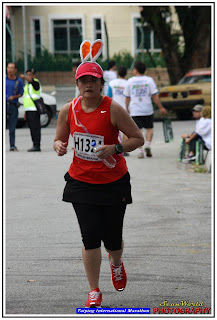 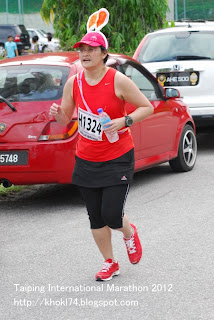 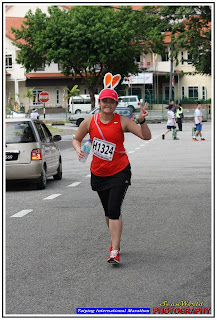 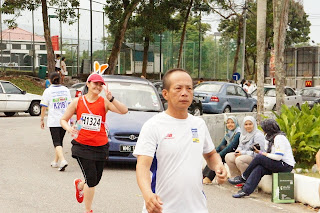 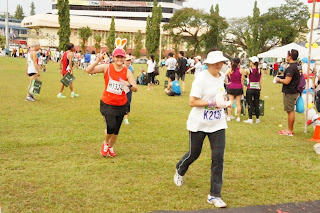 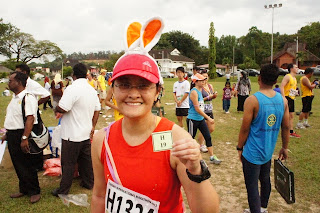 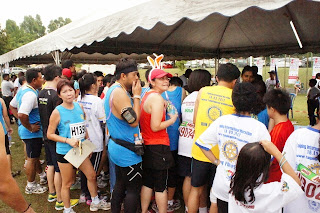 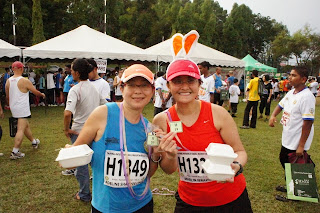 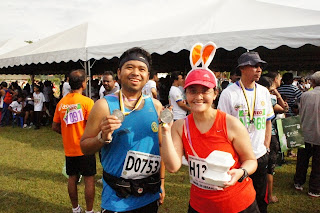 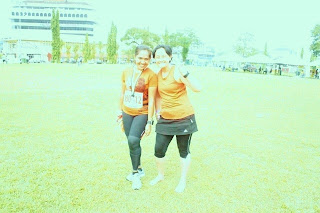 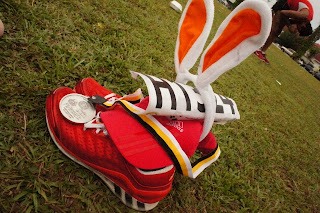 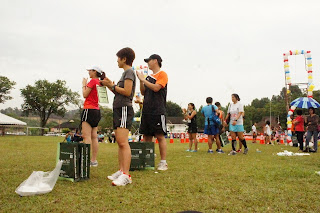 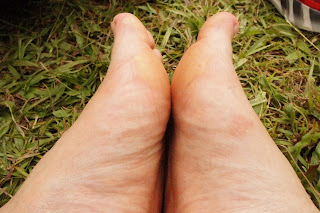 scripts for this interactive photo album is sponsored by
[SK] @ http://sk0617.blogspot.com [LINK]
A cramped-up face. Senggugut on full force! Ugh. 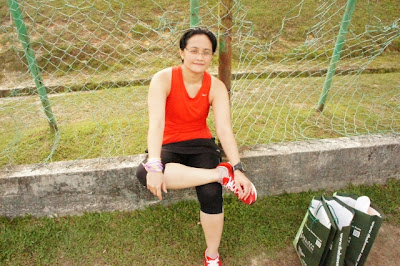 All in all, despite possibly running in the worst organised running event; not that I entered a lot though - I had plenty of fun going to Taiping for this. I told Zaini I definitely want to return to Taiping again next year but for another race and not this one!

Full marathoners, despite their timing deserve respect and of course cheering, clapping and all the support to make it to the finish. It's a pity the race officials didn't see it thay way. I was glad that Zaini humoured me and let me stay and lingered to cheer. ^^

Later, I got another fun! I met with the super generous, exteremly friendly Y & Y sistas! That... soon! :)
Email Post
Labels: Itchy Feet Out and About Race Recap Travel - Malaysia Travel - Perak