Pisang Relay, The Second Round

We entered the inaugural Pisang Relay Run held in Taman Bukit Jalil last year. It was held during the Mother's Day weekend last year and what a perfect Mother's Day celebration it was for me! ^^ Read the post about it here. 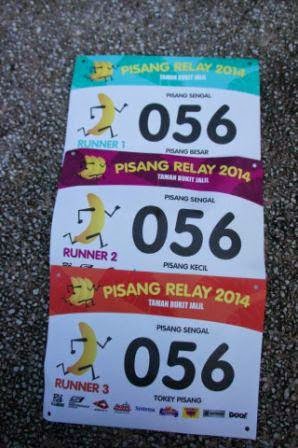 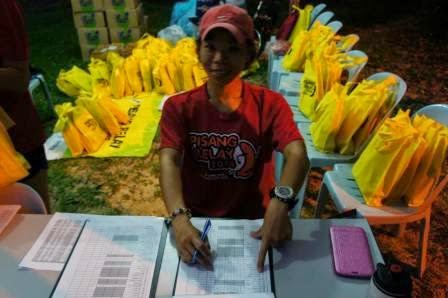 We did not have the time to collect our race-kit on Saturday so we collected our race kit on race day and it was pretty fast and efficient. Thanks Hong Lan! ^^ 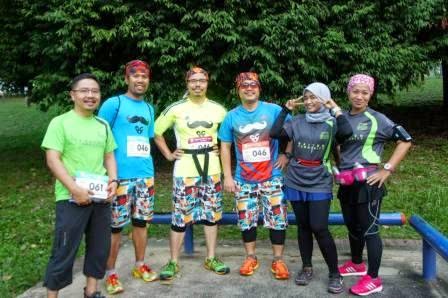 Race day. Met and chatted with friends before the event started. Here, with the GC bunch. 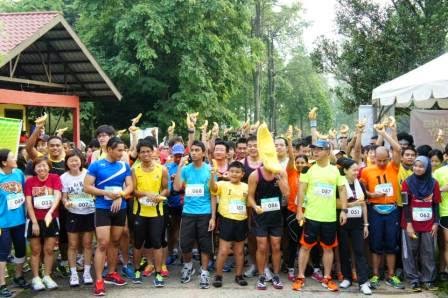 At the starting line.


The event started at 7:30am sharp after a warm-up session conducted by Celebrity Fitness.

Yup, you saw right. There's a guy with a banana on his head. Banana-san and his team joined last year too. LOL

Pisang Relay is a fun run event but by no means everyone was running slow that day. There was a mixture of really fast, podium placing runners, runners running with families and slower ones. Good mixture.

It needs to have the "fun run" approach as it is held in a particularly well visited public park and we're sharing the paths with others. ^^

We faced an incline almost immediately upon starting and the rest of the route is by no means flat. A good hill speedwork training can be done here. *pant pant* 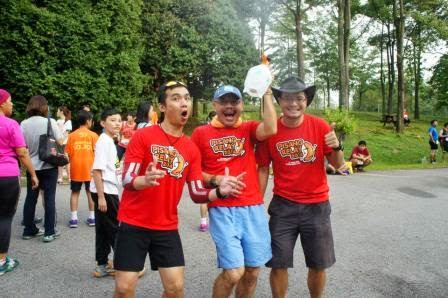 With the volunteers in charge of water spraying. These guys are a HOOT! Thanks a bunch fellas for your cheeriness! It's infectious! 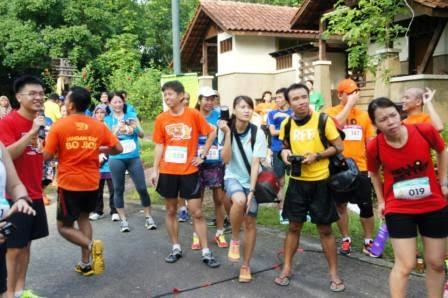 At the "transition" area you saw runners getting ready for the baton (banana) handing-over and dedicated photographers waiting to take us runners' photos. Love them photogs!

Anyway, a noticeable difference from last year's Pisang Relay; there was no announcement made when a runner was approaching this area for the next runner in the team to get ready and be on stand-by unlike last year. I guess it was because the crowd was bigger this year? 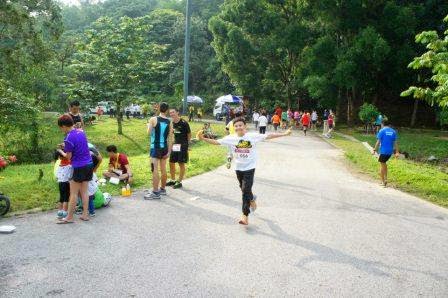 Raimie with another 1.5K more to go in his second loop. Each of the runners in the Pisang Relay needed to do two loops of 2.72K. Yes, you see even little kiddos doing them! Salute!

This is what I love about this event. Anyone can enter. Not many running events have family run categories or allow those under-12 to participate and that's why despite the rather high fees to enter Pisang Relay, we didn't mind paying for it for a chance to run together as a family team. Milo Breakfast Run is another great event for those wanting to run with their families. Another one would be McDonald's Olympic Day Run, which I'm waiting for the registration to open. 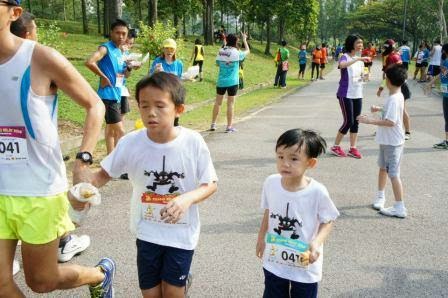 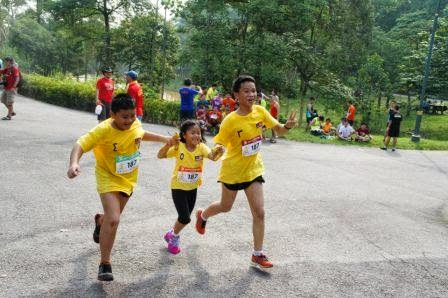 And aren't these cute kids tough? Gotta respect them! There's even kids only team. How cool is that?

Most teams chose to finish with their third runner running hand-in-hand which is so nice ans sweet. Teamwork! 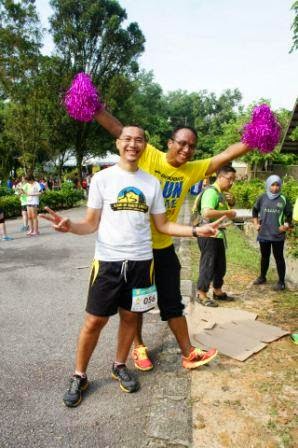 Also sweet is the support from those not running that day but still came to cheer and support their friends. Thanks!!! 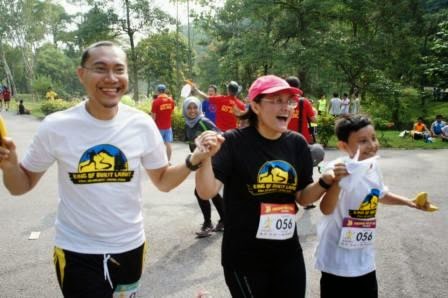 We may be the last few teams to finish but who cares?

And to GC members, thank you for staying back until I finished the run. *muaks*

We finished the run, collected our medals, had our breakfast and waited for the lucky draw to start. 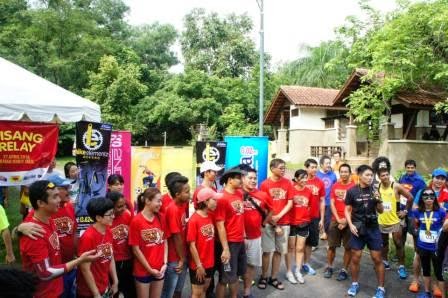 First, thanking the volunteers for their time and effort in making this event a success and ensuring us runners to have a fun time. 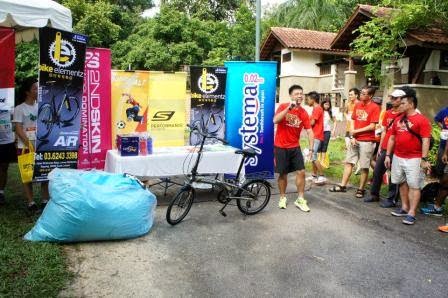 All ready for the lucky draw! 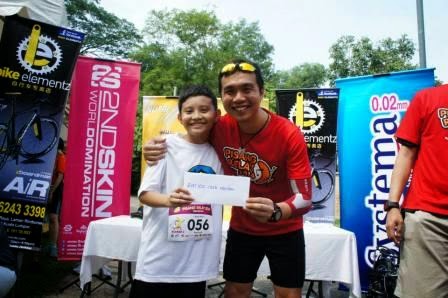 We were lucky this year. Son won a RM100 voucher from Bike Elementz. Yeay! 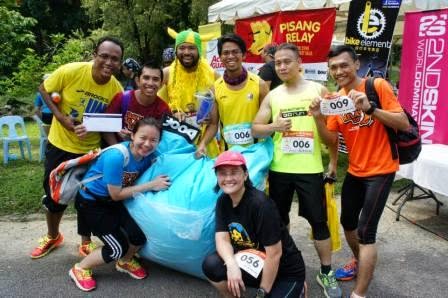 There's even a prize for best costume with the prize of a Doof valued at RM499. Congrats Aizat for winning it. He was also lucky to win a lucky draw prize. 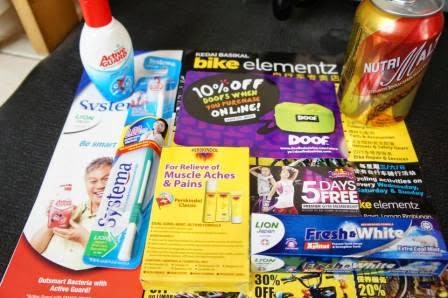 Our goodie bag. First time I received a toothbrush and a toothpaste in my goodie bag but they will certainly come handy! 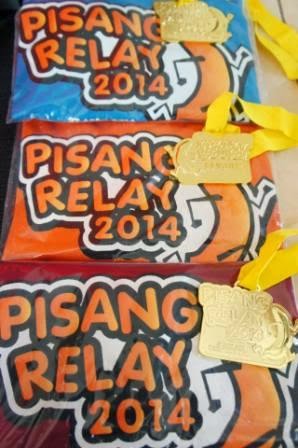 We chose to purchase the event t-shirts and here they are with our medals. The tees can be another team shirt for our next run together. :-)

We had fun. We had our workout. We met friends, old & new.

If you want to see more photos taken during the event, head over to my FB album. Enjoy!
Email Post
Labels: Itchy Feet Out and About Race Recap