I'm not really sure why both Zaini and I got excited into registering to the PACat Adventure Team's organised event in Taiping called the "King of Bukit Larut" but we did. Despite knowing the elevation of Bukit Larut is 1250m above sea level to the peak (which we only covered 10.5K of the 13+K uphill route) and this "King of Bukit Larut" is a hill run. I guess we like the organiser and have so far enjoyed their ermm... low key events tremendously.

Sometimes, it's not about the glamour of running, getting medals, technical event or finisher t-shirts or hoarding goodie bags but rather the enjoyment of a run itself. Period.

The event was flagged off on Sunday, Apr 20th at 7:30am. We made our way to Taiping early Saturday morning and reached Taiping around 10.00am. We lepak"ed" at the McD near Lake Garden for a bit before making our way to the race kit collection area. We had agreed to help-out a little bit, if our help was needed. 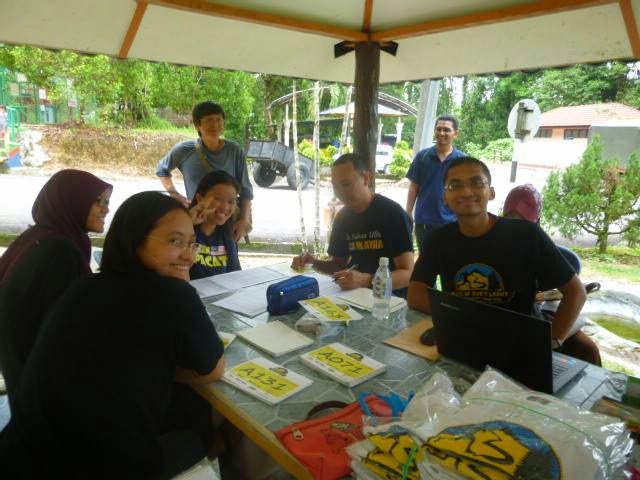 With some of the tireless people behind the event. 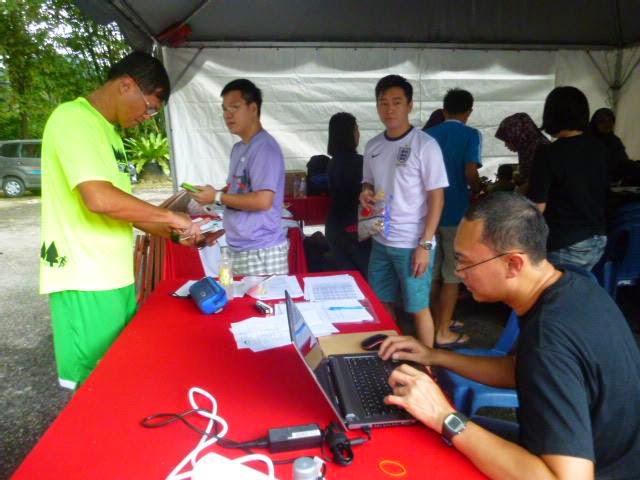 Kacau here, kacau there a little bit, helping out getting the bibs & t-shirts distribution when runners came in droves a little later. 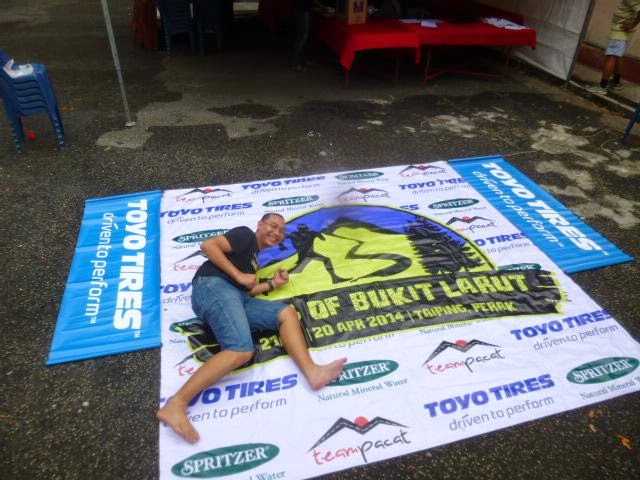 Not too sure how this is helping. Hmmmm... LOL

(photo credit for the photos above : PACat Adventure Team)

We only stayed on until 4:00pm as we haven't checked-in to our hotel yet. Missed out meeting friends who came a little later.

We only arrived the race site at 7:00am and the place was already teeming with runners, all excited to go up Bukit Larut. 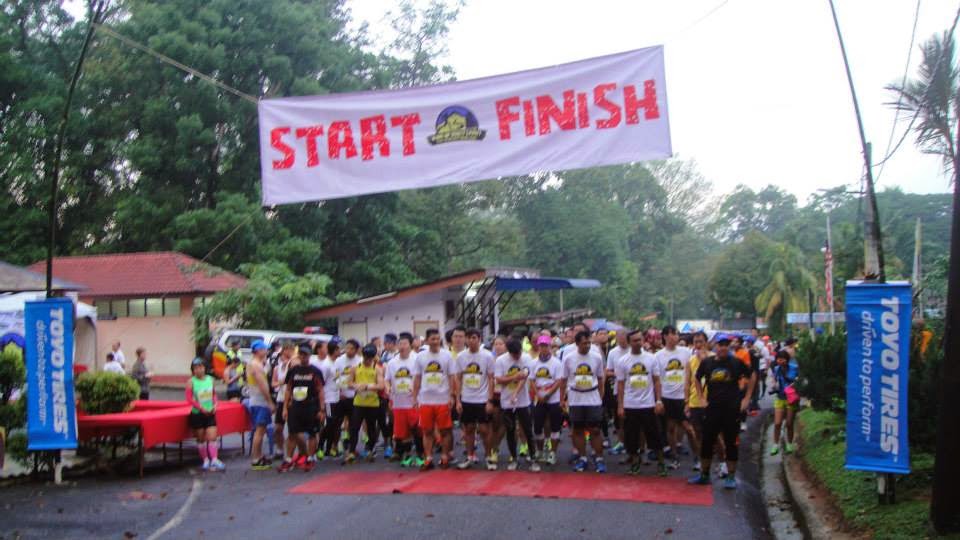 Flag -off was at 7:30am sharp, after us singing Negaraku. Nice touch.

While some ran ahead, I just plan to walk up. Zaini and I had already agreed we won't need to do this together and after me catching up with a couple of fellow runners, Zaini sped ahead.

It was uphill 98% of the first 10K up with a little flat sections and downhills. Doing this with great company took away the pain of going uphill. 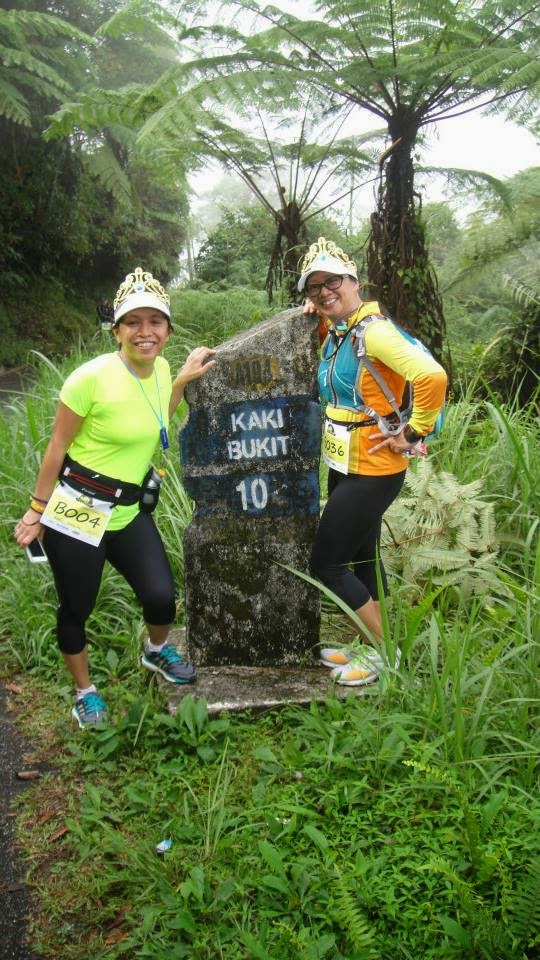 With my fellow Queens. A few of us agreed to do crowns and tiaras - Kings and Queens. Men of course gotta wear manly crowns la. :P 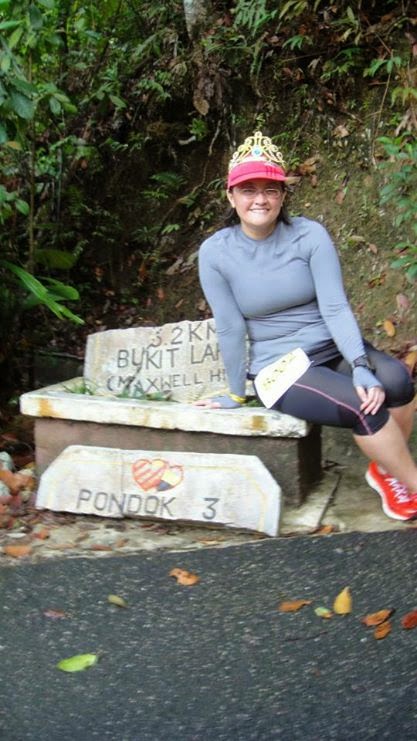 A Queen's pose. Just 3K into the run (which we didn't run LOL) 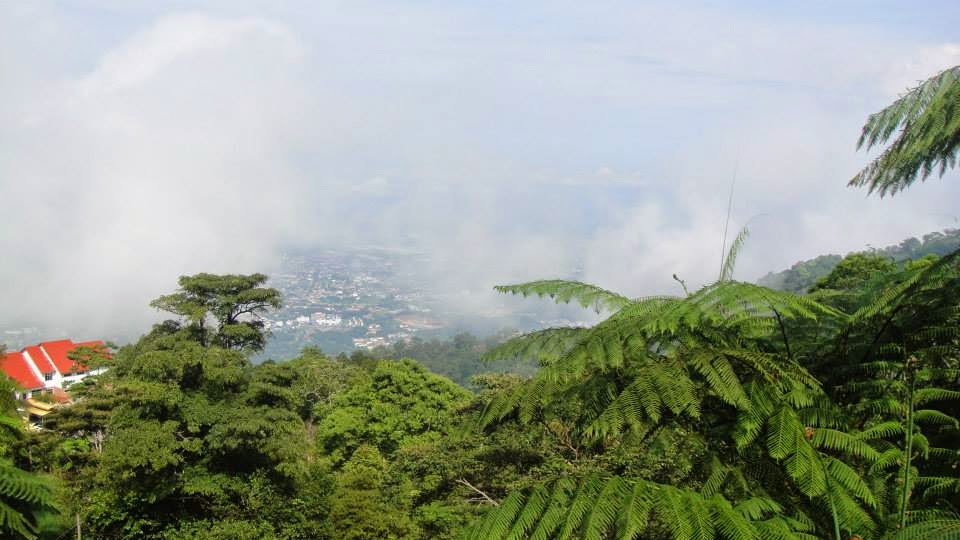 Lovely view that took our breath away. And kinda took the pain of climbing up too. My photo didn't do justice to it. You just gotta come and view them yourself.

Us three walked together with a chirpy and strong runner from Singapore, Mee Kee for most of the climb up. Admire her energy. We talked, laughed, snap lotsa photos and when runners started looping us and came down she'd keep count of every runners that passed us and encourage them. She took photos of every single of them too!

I tried to do so, but my dinky compact camera works horribly with action photos. 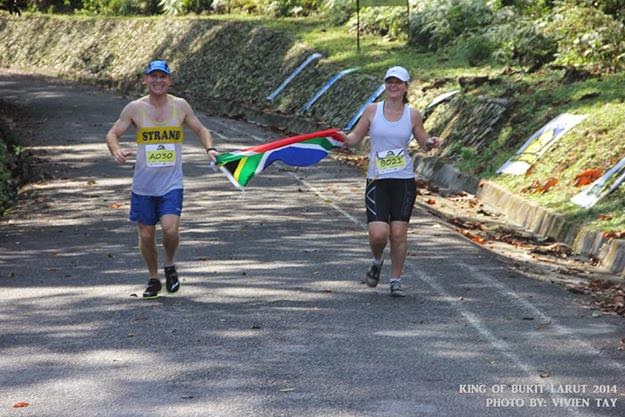 There was a couple from Cape Town joining the event, and the chap was so friendly that when we bumped into him while he was going downhill and we were still going up, he saw that we were taking photos, happily and obligingly ran up and down again so we can take his photos. He was fast! He was the 3rd runner  that passed us! No. 3! The lady was equally fast too.

The four of us (me and the two queens & Mee Kee) were together until we were approaching the final water station before the u-turn to go down. Mee Kee had said she wanted to push and make up for the slow time after that and she did.

I had erroneously thought the last water station uphill was the u-turn point so I spent a bit of time there, munching sweet watermelons, drinking 100-Plus and taking photos with other runners. Belatedly realised that we needed to go uphill about 500m more and darn! they were steep!  Took us 2hr56min to reach the u-turn point, after a 10.50K climb. Phew! 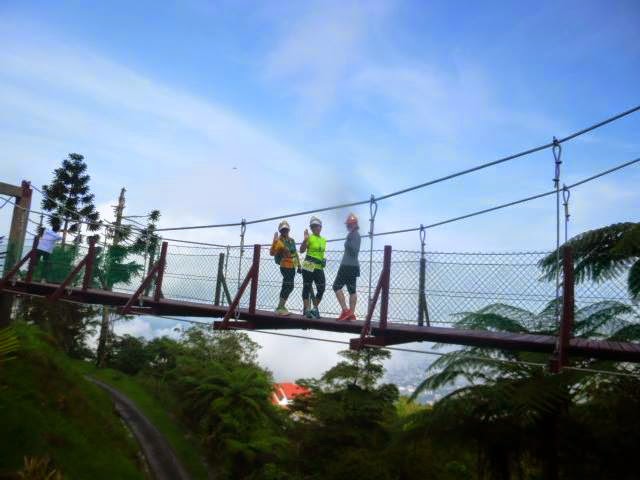 After the u-turn and making our way down; instead of making up lost ground; we took more time to enjoy and taking more photos, of course! Hahaha

The walk downhill was actually quite hard because it was then we (the three queens in the photo) realised how steep it the road was. We were like "how did we manage walking up this?".

Seeing that we had ample time to finish before the 5hours cut-off, we took a stroll downhill. I know back in my mind that Zaini and Raimie won't be happy with me finishing slow but I might as well enjoy the moment and the view. ^^

We bumped into hikers and most cheered for the queens and princesses. Everyone was sooooo friendly! The runners, volunteers, local hikers. Everyone! Love it!

Some runners actually waited for us to arrive and from the bottom of my heart, thank you! I'm so so sorry that I was pre-occupied after the run. 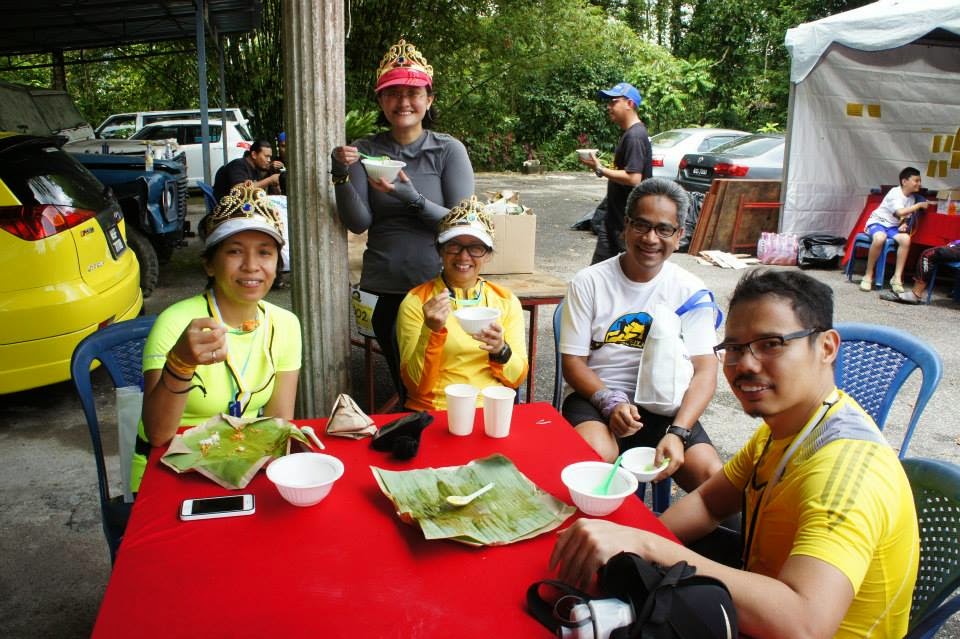 Blame the free-flow cendol and nasi lemak served that made me so anti-social and not care about others that day! Huhuhu 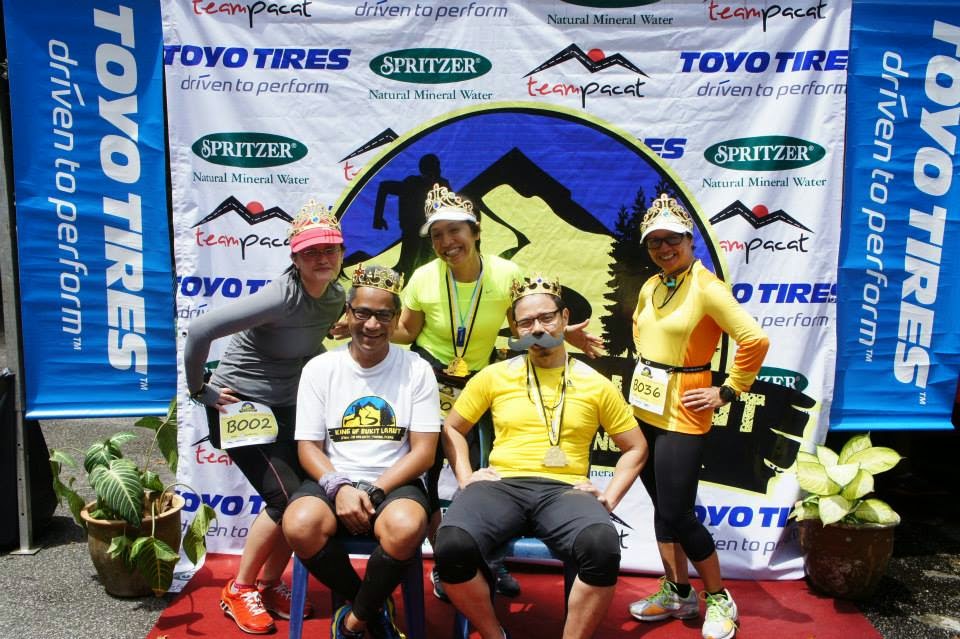 The Kings and Queens of Bukit Larut. ^^

While Mom and Dad went up Bukit Larut, Son was "dispatched" to help out. Poor boy. Hehehe 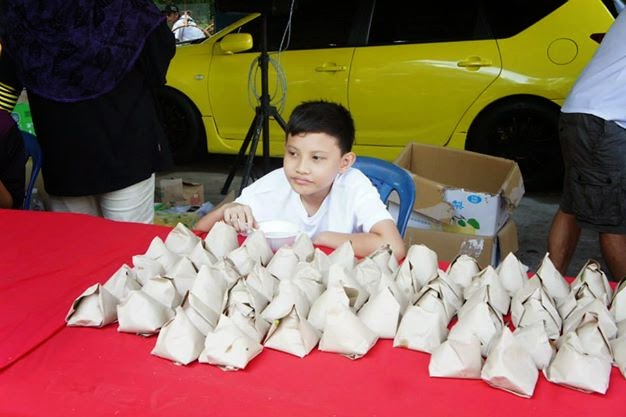 Taking care of nasi lemak. I did ask whether he was bored but he said no. What a relief. ^^

We waited until the last runner finished, lepaked a bit then Zaini and I showered at the toilet there. We had already checked-out from our hotel earlier in the morning, after all.

Poor Zaini of course not only ran 21K, he had to drive home for four hours after that. Thank you! *muaks*

The jeeps that drive visitors up/down Bukit Larut weren't in service for the whole duration the event was on, other than the jeeps taking up supplies for the race organisers so participants had a jeep-free road that day.

Weather was great. It didn't rain a single drop during the event!

I have nothing to complain about the organisation. Water stations were ample. Volunteers were friendly. Even slow finisher like me have enough cendol and nasi lemak after the run.

Love the t-shirt. I didn't check my medal, it's stashed somewhere in my bag so I can't (and don't care much) to comment on the medal.