The last time we visited Taiping was in 2012; when I ran in the Taiping International Marathon. 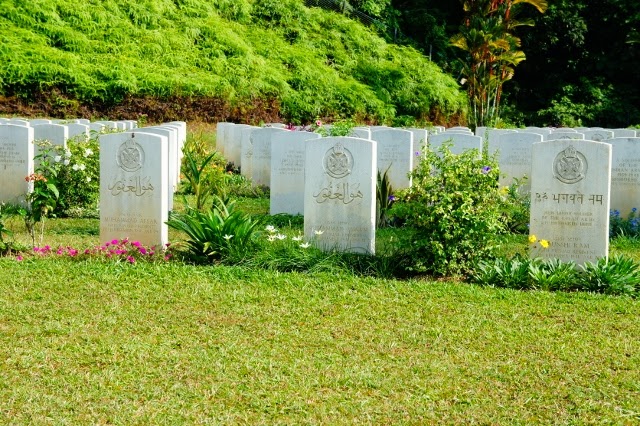 One of the places we visited was the Taiping War Cemetery.

I guess, for those who just wanted to sightsee and take photos; the war cemetery is a letdown for them; as what can be read here at Tripadvisor : 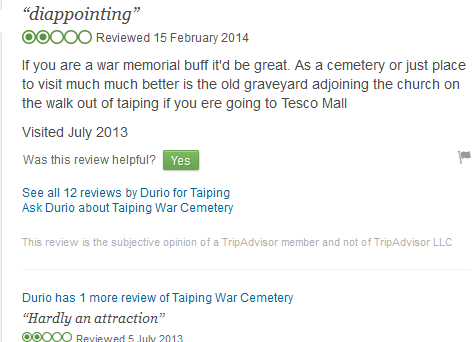 A pity to know such attitude. Sure. It is not a fun place to visit.

But why should it be? I am glad the cemetery is beautifully maintained and the fallen soldiers are let to rest in peace in dignity instead of being turned into a cheesy tourists attraction.

However, I also hope more people would know about the fight and the sacrifices made by the soldiers fighting against the Japanese. It serves as the final resing place for Allied personnel who were killed during the Japanese Occupation in Malaya and is maintained by the Commonwealth War Graves Commission.

The historical information of the War Cemetery :


At the time of the Japanese invasion of Malaya, Taiping was on the British line of retreat down the west coast. Its normal garrison of one Indian Infantry Battalion had been augmented, a casualty reception station organised, arrangements made with the civilian authorities for the provision of 500 beds for military patients, and 20 Combined General Hospital (Indian Army) had been posted there. During the fighting the Indian 6th and 15th Brigades used Taiping as a rest and re-fitment centre for a few days; and, as the withdrawal southwards developed, numerous Indian Army medical units worked there for short periods before each in turn had to move towards Singapore with the fighting forces.

Taiping War Cemetery was created by the Army after the defeat of Japan for the reception of graves brought from the battlefields, from numerous temporary burial grounds, and from village and other civil cemeteries where permanent maintenance would not be possible. There are separate entrances to the two parts, the plots of Christian graves lying on the south-eastern side of the road and the Muslim and Gurkha graves on the opposite side.

In the Muslim and Gurkha section the Stone of Remembrance stands in front of a high bank which forms the north-western boundary. The two small shelters in the cemetery have been constructed of local stone, and a low stone wall flanks the road on each side. There are now over 850, 1939-1945 war casualties commemorated in this site, more than 500 of whom are unidentified.

No. of Identified Casualties: 332


To me, it is really sad to be standing outside the fenced area of the cemetery and reading the names and age of the soldiers. So many of them died too young. Some were in their teens.

The road up to Bukit Larut (which we runners will be running up come Apr 20th in the King of Bukit Larut race) was built by prisoners of war during the Japanese occupation in the Second World War, you know.

Anyway, for those who doesn't know... Taiping means "Everlasting peace" which was ironic because it was a result after British intervention against the bloody feud between two rival Chinese secret societies, the Hai San and Ghee Hin, over rights to rich tin deposits. Kelian Pauh was renamed Thai-peng. Quite an optimistic name and I guess it worked because judging from what my friends living there have to say, Taiping is a really peaceful place to spend time in.

There are many places that we have yet fully explored the last time we were in Taiping. Hopefully we get to see more when we get there!
Musings Out and About Travel - Malaysia Travel - Perak Vacation