Putting Through Its Paces

I did that with my lovely Inov-8 268 trail shoes when we hiked up to Gunung Nuang two weeks ago. Got it going uphill, downhill, through river crossings, through gravel path, through slippery wet trail (yellow clay, rocks, leaves covered) all in a day. The shoe performed marvelously and my foot felt good in it despite spending 11 hours having my feet wet in it.

I love the shoe. Serious. It grips well. It drains water well. It's light and I could feel the surfaces I was walking on; which is a good thing and came back pain free. No black toenail. No blisters. *super like*

Last Sunday, I put another gear through its paces.

I was looking for a long-sleeved top for an event I'm gonna do in June which would see me running under the hot afternoon sun (unless it rain) and had crossed-out my long-sleeved 2XU compression top. One thing about the 2XU top is that, I get super hot and it did get uncomfortable around the area where the arm bend (what's it's called, again?) after a few hours of running and sweating. Hubby had the same issue with his compression top too. He actually took it off, after doing 25K when we did Putrajaya Night Marathon last year! Yeah, he did a strip tease while running. o.O 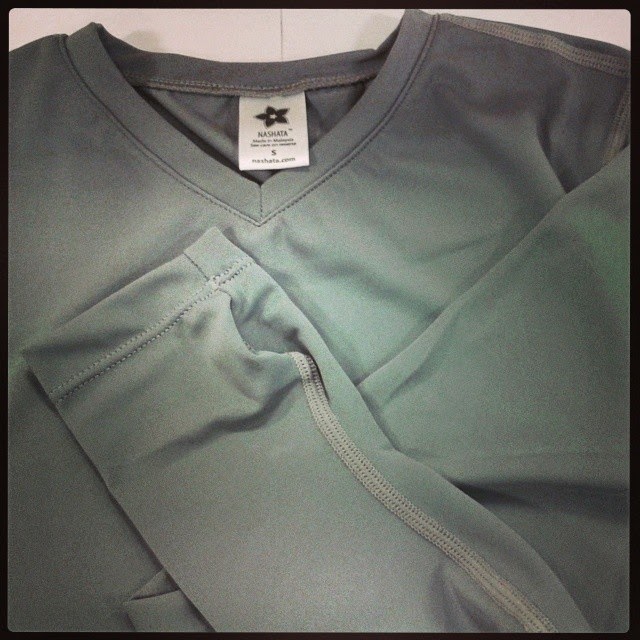 After much searching, I finally bought this long-sleeved grey Nashata blouse at MWM expo in March. It was an expo promo and I got it for RM89 instead of the RRP of RM99 selling online.

The Nashata grey top is an Ultra A-Cut top and Nashata promotes it as suitable for half-marathons, cycling and aerobics activities. It's a brand that caters for modest Muslimah wear but this Ultra A-Cut top to me, is suitable for any ladies wishing to cover their arms against the sun. And... with its A cutting, it's flattering over at the tummy area as the blouse doesn't hug there. "Less buncit looking, kononnya" Muahaha 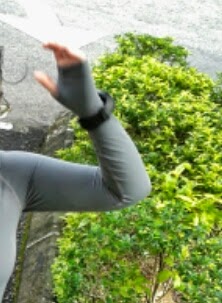 I bought it specifically because of the arm sleeve. It covers the hand up to the fingers. And it stays that way. That and the fact that less fat bulging compared to the other top I have. *grins*

It felt weird at first, putting the thumb into the *thumb hole* but it was totally forgotten after a while. Added bonus of having that long sleeve is I can easily wipe sweat of my face with it. Total win! Great wicking of moisture.


Love the feel of the fabric which is soft but not flimsy. I didn't feel I get heated up in this and as a matter of fact, it felt cooling and airy. With my 2XU top I tend to wish I can take it off after a few hours of running and thankfully I felt good with this one. I don't like the feel of tightness when I bend my arms either with the 2XU top and thankfully, no issues with this one? Maybe cos it's not compressing? 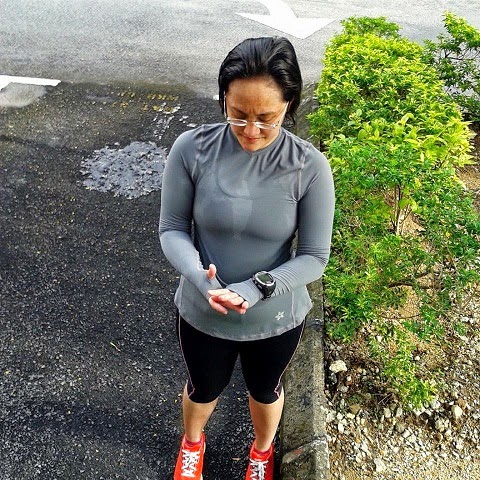 Me, checking on my nails after a 3 hours run. Hahaha ( I continued doing a 30min walk and a 20min hill repeats after the 3 hour run. Was in panic mode training Hahaha)

I bought a S sized top which may be a size small for me but it was comfy enough for me.


There are a few issues but something I can live with :

1. The bunching around the shoulder area (see above photo). Wasn't an issue while wearing it but it doesn't look good in photos. I can be vain. hehehe 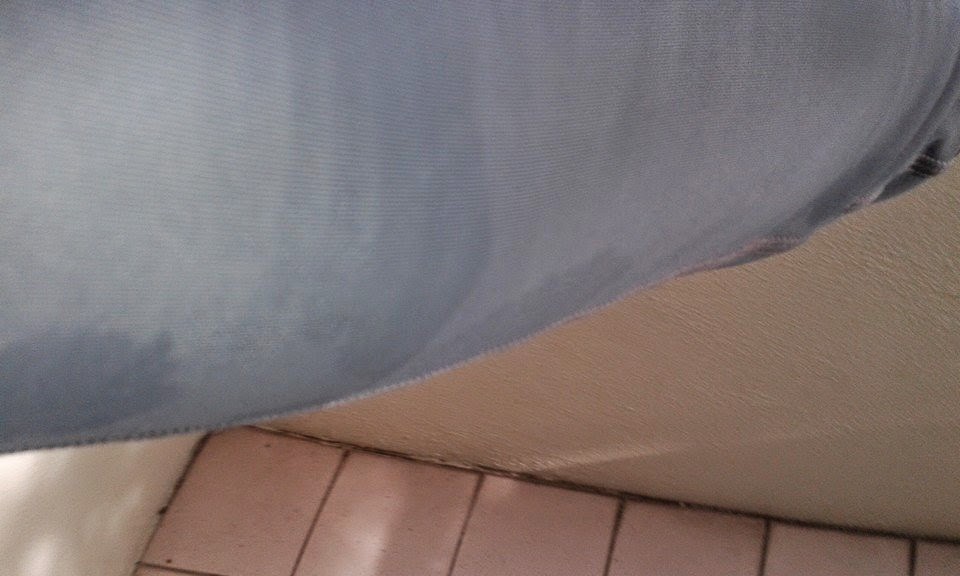 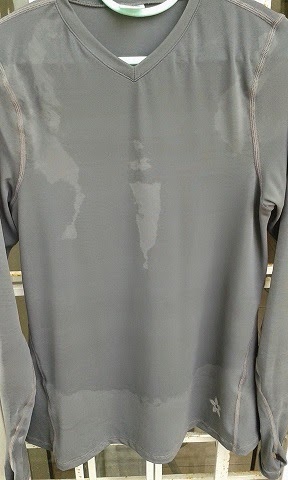 2. Visible DRY sweat stain. I guess I have to look for darker colours to avoid that? I'm currently looking forward to their fuschia colour top though. I wonder how it'd look though with sweat stain. Anyway, the solution would be to not wear a sweat-soaked top after finishing a run and change quickly lah! Adui... Hahaha

A plus point, the top didn't smell even after a hard workout. I checked (I mean, I smell). While running and after the sweat dried up. No "tengit" smell near the armpit area. Phew! LOL But seriously, there are fabrics that is no help in the smell category. I have a couple of international brand workout tees that I won't wear anymore because I tend to smell during the workout while wearing them. Malu la if there's a hot guy nearby!

Anyway, I've decided to wear this top to my next run in Taiping. The 21K King of Bukit Larut. For me, the top blocks cold and yet cover against the sun's heat marvelously. For an affordable price.

And yes, to that 12 hours thing in June at Lake Garden. I wonder if its any good to withstand a cool autumn marathon? hmmmmmm...

I should get another top as a back-up for this one, shouldn't I? *go dig piggy-bank*

p.s. nobody paid or remunerate me to write this so yes, this is not a sponsored post.
Email Post
Labels: Itchy Feet Review