A Family Affair At myBuddiesRun 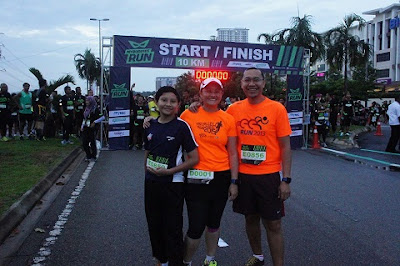 The three of us made our way to Cyberjaya this morning for myBuddies Run. And for a change, both Hubby and Son also ran in the Run. I think the last time Son ran with Hubby was in the Energizer Night Run way back in Aug 2014.

But of course, Mommy went solo. She did her 10K while her two boys had fun in the 5K Masked Fun Run category. 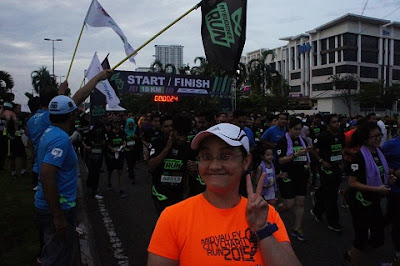 I started somewhere in the middle, after the 10K category was flagged off at 7.15am.

I like the route of myBuddiesRun and the weather was perfect today. A bit cloudy and not hot at all. Route wise, the road was big enough to accommodate us runners and there weren't too much traffic on Sunday morning.

Marshalls and traffic police were stationed at critical junctions and they were awesome. One impatient driver decided not to heed the traffic police instruction and sped ahead though. Tsk. Tsk. 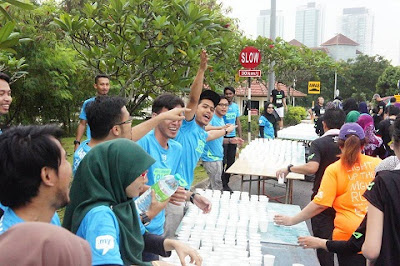 Crews and volunteers at water stations were great too.

As usual, my weakness is the first 3K where I would suffer a bit just to maintain pace. I tried to rectify it this time with a short 1 mile warm-up before the run but I guess it wasn't enough. Not if I want to run at a faster pace immediately into my run.

Just into 2K and heading towards the first incline, I decided to walk because my calves felt tight and shoes felt slippery. Hah Hah.

A friend, who is a barefoot runner and was running plus taking photos during the run shouted way from the back to make me run and I just covered my ears and don't wanna listen to him. LOL

It took me two uphill walk breaks at around KM2 and KM4 to finally have my legs muscles all warmed up and be more comfortable to run. And I did.

I wasn't aiming for a fast pace and my goal was to run at a faster average pace compared to Larian Hari Keputeraan Sultan Nazrin Shah which I did on Nov 29, 2015;  so I just maintained a steady effort for this run and stopped at all three water stations for a drink and a breather. 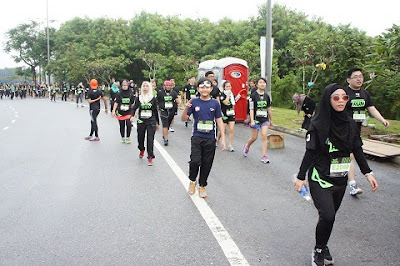 Son too had fun with his Daddy in his 5K run. 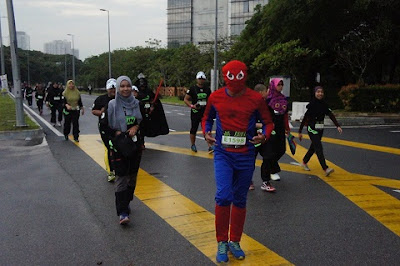 There were more fun stuff to see in the 5K Masked Fun Run category... like seeing Spiderman joining the run. ^^ 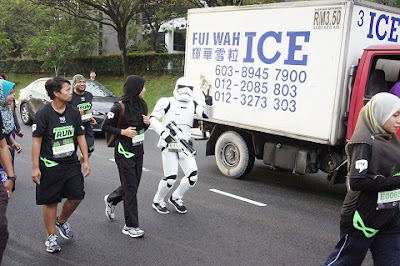 Even Storm Trooper made an appearance. He's a popular figure at the run and especially at the finish line later.

For me, as I crossed the Finish Line, a Selangor Athletic Association Official stopped me before I could proceed to collect my medal and goodies. He wanted to jot my details and timing...

After getting my medal, bananas and drinks, I loitered at the finish line to wait for Hubby and Son to finish their run. Later, met a whole lot of friends and took more photos with them.

We stayed around after our run and enjoyed a nice breakfast of fried meehun (cooked on-the-spot) provided by the organiser and waited for the lucky draw session.

Alas, we weren't so lucky and didn't win anything.

BUT we had fun anyway! Before heading home, I bought a pack of Laksa Johor that was sold at the event site. myBuddiesRun also had a food truck/car boot sale area so runners could also buy food from the food trucks. Even tudung, clothes and toys were available!

Congrats to all 6,000+ runners who made it to myBuddiesRun today.
Email Post
Labels: Events Itchy Feet Travel - Putrajaya